The Turkish Armed Forces and their proxies have seized from the ISIS terrorist group 5 villages, including Sheikh Alwan, Bazji and Batajak, in the northern Syrian province of Aleppo. 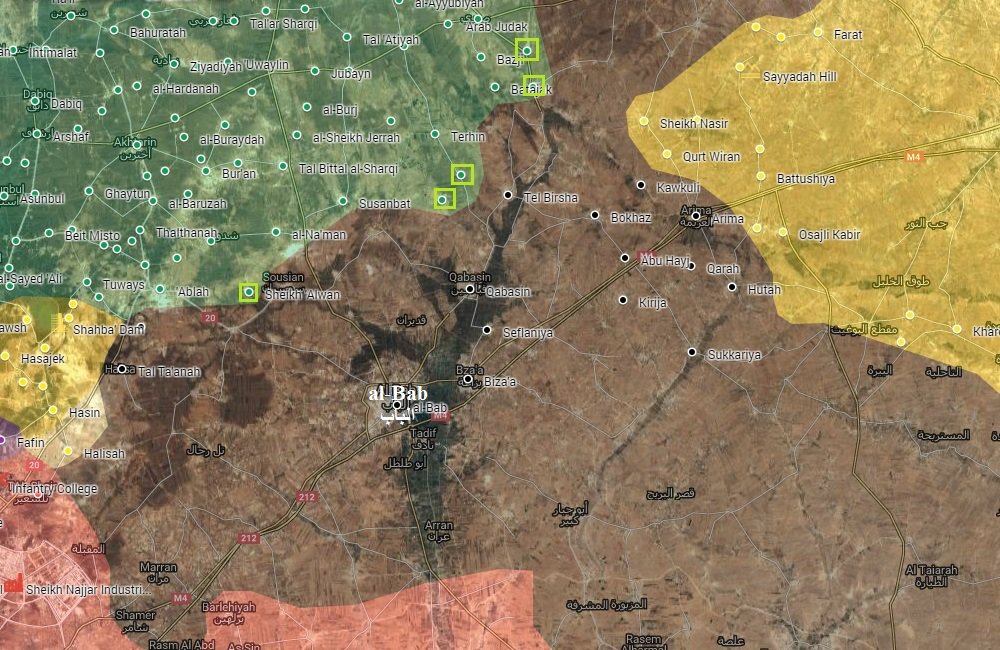 Imo the Russian naval group in the med is a warning to Turkey not to send it’s proxy forces south of al bab. If they do, hell will rain down upon them. The Syrian army will advance North to al bab, thereby blocking the Kurd east West link up

al-bab will be the city where everyone fights for. SAA, FSA, YPG and ISIS.

Turkish intent is quite clear: to seize occupy and create a “buffer/safe/security zone ” in northern Syria west of Euphrates and some 20-30 km deep, possibly as far south as al Bab but certainly down to the 36 degree 30 min latitude parallel, that is an axis roughly from Afrin – Manbij – Euphrates.This has always been their declared, clear objective : No Kurdish presence whatsoever in this area. This means the Afrin Kurds (extreme NW enclave) YPG are finished – they are bottled up, cut off and will be given the “suitcase or coffin “option, leave or face slow genocide. As for al-Bab, once Da’ish retreat no doubt some arrangement will be made to allow SAA Syria to re-establish control but be in no doubt whatsoever that the Turks will never withdraw. They invaded Cyprus in 1974 and set up their puppet republic – 42 years later they are still there. Don’t expect them to withdraw from outside Mosul either. As for Raqqa I expect the SDF with unlimited US/GB/FR air support to fight for the city, their reward will be another puppet statelet “Rohaja ” under US protection. Another “No Fly Zone “anyone ?

You really think Assad will let Turkish terrorists surround Aleppo City? I’m betting for more on a SAA and Afrin kurd alliance since that Kurdish group doesn’t mind working together with Assad. Erdogan terrorists will not follow instructions their real goal is to fight Assad in Aleppo City. US tried to control the “rebels” and failed Turk version 2.0 will fail as well.

No of course not. Just I think Turkey will stop their invasion /occupation at the 36,5 degree north latitude , roughly Afrin – Manbij – Euphrates line. Al-Bab will return to Syrian control by battle or agreement once Da’ish withdraw. The Turkish terrorists plus ” FSA ” cannot move 500 meters without Turkish army support so the SAA will have no problems defeating them. Aleppo is safe under SAA control, the eastern pocket of terrorist gangs can be slowly smoked out of their dens and barbequed.

Maybe since Erdogan cannot get his caliphate he will have his very own ‘Golan Heights’ and claim he is protecting Turkey’s homeland. International law and invading a sovereign nation can be discussed later when he appears at the ICC.

Exactly right PJ, der Fuhrer Erdogan has quite clearly stated the objective of occupying and establishing a “security/buffer/protective/safe haven ” in northern Syria – just like the Israelis create facts on the ground and squat there permanently. Turkish/Israel tails wag the American dog. Meanwhile a simple thrust up the river valley from Reyhanli salient to Ifrin will isolate/cut off Kurds in their NW pocket, advance thru Manbij further to drive out all Kurds west of Euphrates and der Fuhrer is happy. While everyone is focussed on Aleppo and Mosul the SDF gets massive US support to take Raqqa, then declare a Kurdish Republic of Rojava or whatever, protected by a US/GB/FR unilateral no-fly-zone ? Just my thoughts but is not the US neo-con plan to balkanize Syria now happening ?