Just hours after an official start of the ground phase of the Turkish operation in Afrin, the Turkish Army and its proxies from the Free Syrian Army captured the villages of Shengal and Adama from Kurdish YPG/YPJ forces. According to pro-Turkish sources, 3 members of local militias were captured.

Meanwhile, pro-Kurdish sources claimed that YPG destroyed two Turkish battle tanks in the recent clashes. However, they were noot able to provide any photos or videos to confirm these claims. Neither turkish forces of the turkish army, nor kurdish forces of FDS have any soberaignity to take control of the región of Afrin and Manbij, because its teeitory, like every site of Sirya, would have been controled by his legal and legitim governemt: The Syrian Arab Republic 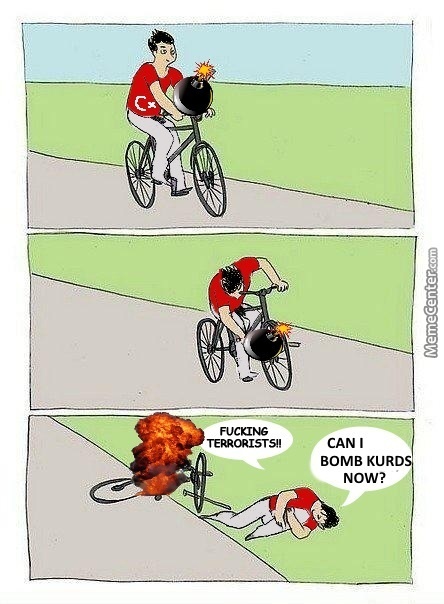 Who actually thinks there is any concerns by all the powers that be, over what the serfs and subjects percieved standards of legality, what is reality is more of gentlemen’s agreements that will decide the fate of Syria.
I use the terms gentlemen and serfs/subjects as deroguetory phrases, as there is no “Honor” among thieves nor it seems among world’s populace at large it.
We have whiners and crying of those caught in the crossfire, who feel effects of conflicts, most of whom never gave a Fly’n f about anyone but themselves and immediate families, and then we got those participants in this case Kurds who in some twisted
mentality think by killing under powerful
instructors is worthy cause.
Then we have pseudo and intellectuals that
mostly throughout life have never undergone sufferings of war, who kissed/sucked the easy way convenience, nd by whose labors have given power to the dishonorable actors. Words are easy but actions to end such as we see of millions dying and displaced, actions that enhance their living standards no matter how far from actions they live,.
THEY pick and choose and quote words, words do not stop bullet and bomb wielding Gentlemen’s sensablities, and by deliberate ignorance will not give into actions by words or deeds add to their physical discomforts

For the truth be that no one hives a f about the legalities of life until those legalities attack them.
There is no need for this war, exception being that, we do not stop the corruption within all of humanity.

There seems to be a tendency towards re-escalation of the situation in the ME lately. It is too early to judge anything about the ongoing operation. We can only speculate about the intentions and drives behind this different type of Turkish aggression, as now we are not talking just about proxies, but the national army. It all depends on who the Turks are playing with and who they are letting go, and that is still not obvious, just subject to speculations. Those are interesting times. Turkey siding with Iran/Russia/Syria and probably China, USA/NATO/Israel or just going for its Neo – Ottoman dream? Soon enough we will see how this plays out. Unfortunately, Turkey holds one of the most important regional roles on how the whole middle east situation develops. Once it chooses sides it will become clearer. One has got to be extra sober when passing judgement. Meanwhile, the asymmetrical, Machiavellian practices makes it hard to understand the greater schemes. Take for example the statements and actions between US, Turkey, Kurds, Syria and Russia last few days. To each its own role… the retards, the opportunist aggressors, the willing and delusional slaves, the true victims and the ?benign? mediators. And Israel is pretty silent…

LOL -> “the retards, the opportunist aggressors, the willing and delusional slaves”

Israel appears mostly silent about the Syrian war in the western news cycle – but behind closed doors they are screaming. Literally. Netanyahu and his foreign diplomats went to Moscow to try and get the Russians to cede ground over Syria but came away with nothing – and according to Russian sources by the end of that meeting the Israeli’s were shouting at their rather unimpressed Russian counterparts. For the Israeli’s, the Russian intervention in Syria was a complete calamity. It stopped the regime change program and with it the very real opportunity for Israel to annex more Syrian land north beyond the Golan, as an extended buffer zone, amidst the political fallout – which would have also offered a secondary strategic military route into Lebanon. The anger and petulance of Israel over the resurgence in the Syrian leadership’s fortunes is clear enough through their actions in periodically launching missiles and guided bomb attacks at Syria from inside Lebanese airspace.

My thoughts are similar to yours about the situation in Syria and Israel’s schemes. Especially after the Jerusalem declaration, the convergence between US and Israel foreign policy became more than plain obvious and set new questions, so a low profile period started.

Well Shenkal was reclaimed hours ago and clashes in others as Turkey have no real control, just nonsense claims about controlled areas with the fight ongoing.