Euphrates Shield forces officially announced the “liberation” of the Syrian city of al-Bab from the ISIS terrorist group.

According to pro-militant sources and Turkish media outlets, the so-called “Free Syrian Army” and the Turkish Army took full control of the town after breaking ISIS defenses in the center of al-Bab.

A number of ISIS units have withdrawn from their positions in the eastern part of al-Bab.

Photos from al-Bab by pro-Turkish sources: 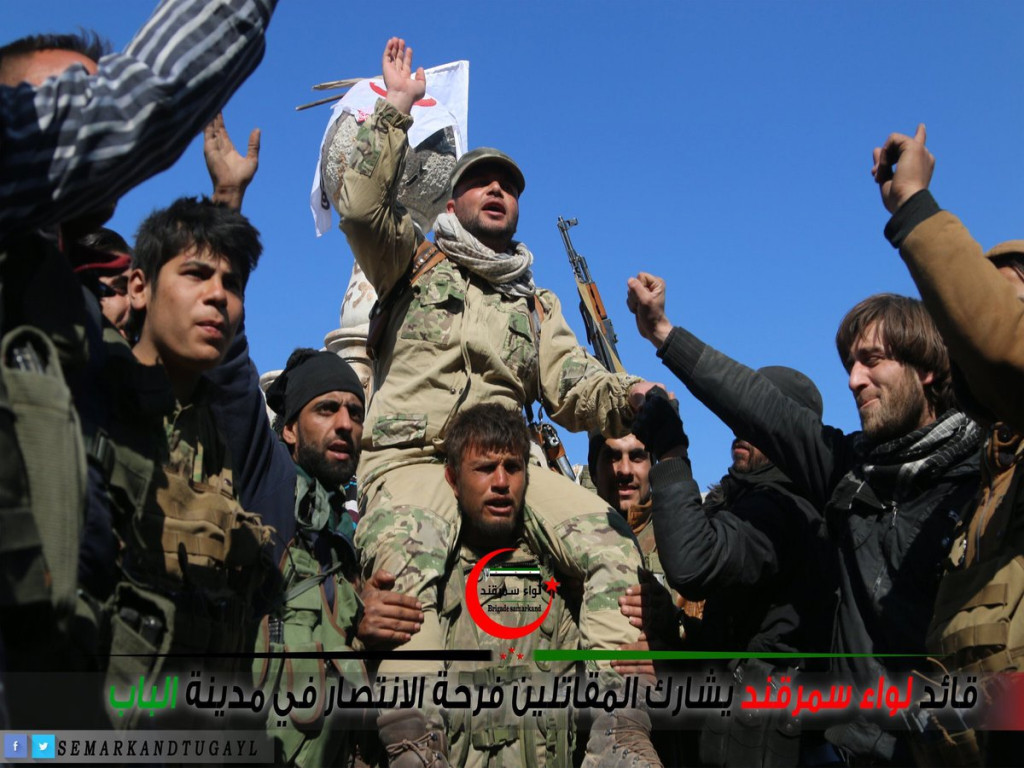 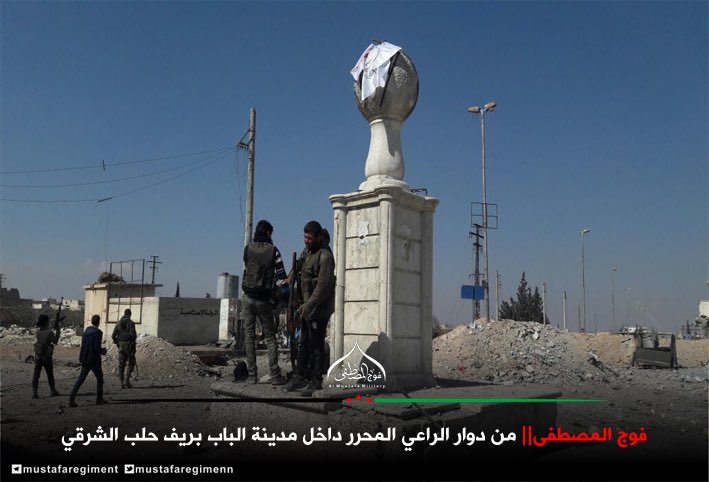 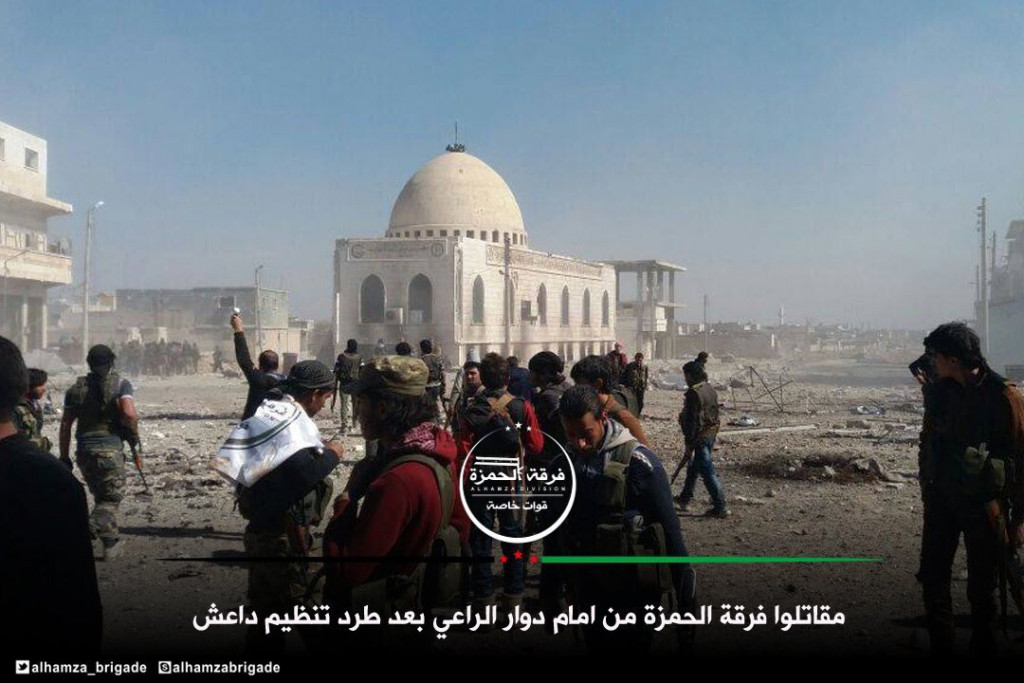 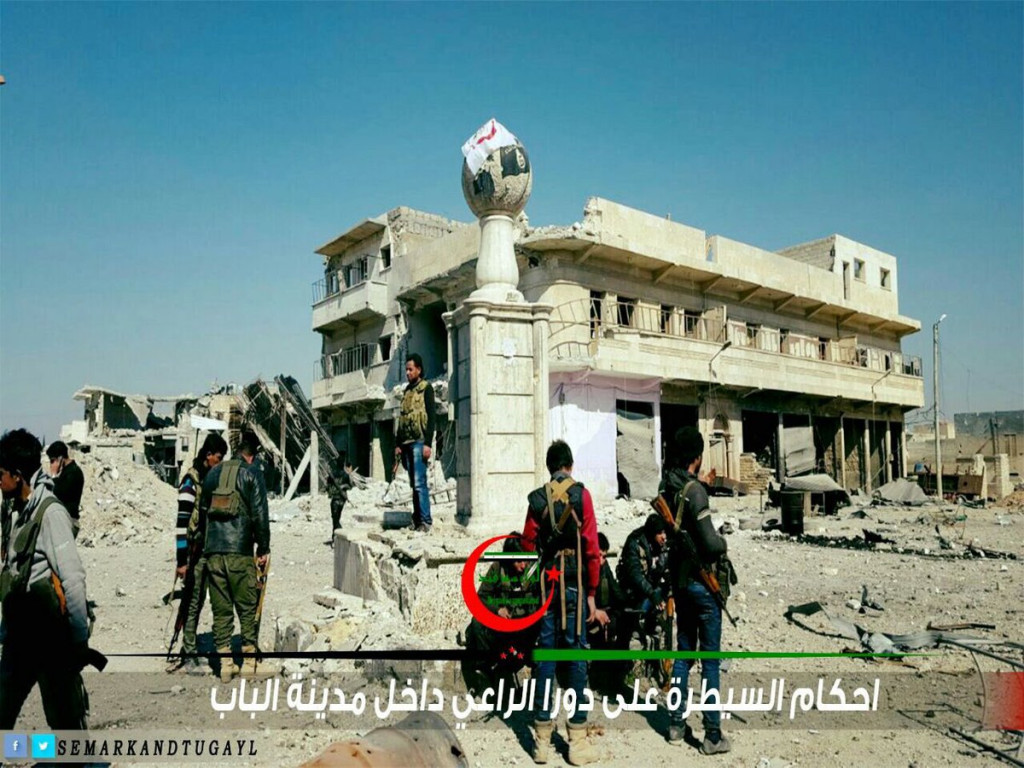 Wonder how big the bribe was from Turkey and McCain for the terrorists to leave and where did they go too unhindered?

Probably :D War between Turkey and ISIS is all but not trasparent :D

so there is a war between Turkey and ISIS. I was naively thinking they are just cajoling the best way to remove Assad, destroy the Kurds, and put a sharia state in power over Syria.

But islamist are divided anyway. This war is extremly diplomatically complex

Hopefully next station is Manbij.

By the way, southfront looks really bad right now. Contrary to daily advance that was being made by FSA, southfront kept saying they couldnt advance, they lost all positions etc.

I guess they captured the town by not making advance and losing all gained positions eh? Hopefully SAA goes for the same tactic for Palmyra.

meh turks pobably will loose it again tomorow…they cant hold on it….and if you want hem to go to mabij theill face annihilation…kurds are even tougher than isis

They are so tough…

Not True. Isis has always beat kurds. But when air power intervened Kurds would win

the turkish army with 10.000 forces and airforce could take el-bab just after 5 months. I think even this is not right. Just after McCan visit Ankara they could take el-Bab. There are must be pressure on Isis by McCan to leave el-bab or something else.

Not True.Kurds have always beat isis. even without air support

Dear friends, above you can see a nice example of an attempt to misrepresent SouthFront’s coverage of developments in Syria. P.S. https://southfront.org/pro-turkish-militants-break-through-to-center-of-al-bab-city-video/

You really reply to this “man”? You have time to lost :D

The only thing they have lost is their minds lol!

“The ground army may be in slightly better shape but NATO’s second biggest military is no longer the serious force it once was. The whole Turkish operation is in disarray.”

“Another 5,000 Turkish soldiers were now send (Tur) to join the operation.” Turkey’s total fighting menpower in Al-Bab offensive was 500 SOFs at best.

“Casualties climbed and the mercenaries of the FSA refused to continue the fight.”

“Turkey-led forces have failed to seize Qabasin and Bzaah, and retreated from almost all areas seized inside al-Bab. Intense fighting is ongoing.”

“Turkey-led forces have captured of some points in western al-Bab, but the situation is far away from the breakthrough of the ISIS defenses.”

First report is 8 days ago.

Second report is 3 days ago.

And the last report is only 1 day ago.

If we were to cite SouthFront’s reports for Al-Bab operation, we would think that there are hardly any advance being made in Al-Bab offensive and city is far away from liberation. Which was false. House by house, street by street the city being captured. But you wouldn’t able to see that from SouthFront’s reports.

Espcially the report that came out on yesterday. “far away from the breakthrough of isis defences” and city falls in less than 24 hours…

What we see is false reporting by SouthFront. I don’t know, perhaps some of the sentences were sneaked in there by anti-Turkish staff members of SF.

Regardless, this did not change the misinformation being provided by SF day by day to make Al-Bab offensive look like a failure.

I am not expecting an answer to this comment. As there is no logical one that can be given.

You can hope all you want biased AKP troll want to invade and slaughter and destroy Manbji Albab wasn’t enough for your imperialist agenda.

I am no AKP supporter. You bunch are like extreme nationalist Ukranians. Whenever someone comes out and explains why Crimea being connected to Russia makes sense, these extreme Ukranians immediately declare them Kremlim troll.

You guys are the same. Whenever someone comes out and says something about Manbij or PKK, you immediately accuse him of being AKP supporter.

Let me tell you this; it is thanks to AKP that PKK were able to gain so much territory in Syria. If Turkey had a pro-Ataturk goverment, right now there would be an ongoing massive military operation against PKK in the north of Syria.

AKP is the worst goverment of in Turkey’s history. They let Greece capture 18 islands. They let PKK capture Turkey’s small territory in Syria.

They are selling out North Cyprus.

And all for POWER and MONEY.

Like I’ve mentioned, you guys are lucky that Turkey has a corrupt man like erDOGan controlling the goverment.

Ok, now we know you aren’t a AKP supporters but a nazi-turk. Good to know.

wow you are an idiot!! the 18 island were belonging to greece even before AKP was goverment in turkey!!

Why do you believe any propaganda they feed you? Those islands were given to Greece by the italians in 1947. https://en.wikipedia.org/wiki/Treaty_of_Peace_with_Italy,_1947

Why did he call him Ukrainian lol? He denies genocide in 1900s also.

bullshit alert. He’s a notorious pro-turkish troll going with other names in other forums. In this instance, he tries to appear good at Russian eyes so to promote any agenda Erdogan passes him.

Uneducated boo fun he accuses of AKP because he doesn’t want to generalize an entire race like you do.

how many Daesh defected or escaped?

I don’t want to be the party pooper. But I don’t believe they have captured all of the city. They have a tendency to declare a victory before it happened.