The Turkish Naval Forces Office for Navigation, Hydrography and Oceanography announced on September 16 new navigational telex (NAVTEX), accusing Greece of militarizing the island of Chios in a violation of the 1923 Treaty of Lausanne.

On the same day Turkey announced a NAVTEX to extend the Yavuz drillship’s activities in Eastern Mediterranean to October 12.

The treaty officially settled the conflict that had originally existed between the Ottoman Empire and the allies, including Greece. It defined the borders of the modern Turkish Republic.

On September 13, Turkish Defense Minister Hulusi Akar accused Greece of arming 18 out of 23 Aegean Sea islands. The minister said the step was meant to escalate tensions and sabotage dialogue.

“According to our understanding, tension, provocation do not help anyone, especially Greece,” Akar said, calling on Greece to put aside “provocative behavior.”

Turkey’s drilling operations in Eastern Mediterranean and its last maritime agreement with the Libyan Government of National Accord (GNA) challenged the current naval border of Greece. This pushed Athena into taking serious military measures in the region.

Both Ankara and Athena have signaled a willingness to start talks on Eastern Mediterranean. However, the crisis is still apparently far from over.

Turkey is the only country that invokes and demands the demilitarization of the “islands of the Eastern Aegean.

Regarding militarization, the status of the Greek islands of the Eastern Aegean is governed by international treaties.

the status of the islands of Lemnos and Samothrace is governed by the 1923 Lausanne Convention on the Straits, which was replaced by the 1936 Montreux Convention,

-the status of the islands of Mytilene, Chios, Samos and Ikaria is governed by the 1923 Lausanne Peace Treaty and

-the Dodecanese regime is governed by the 1947 Paris Peace Treaty.

The right of Greece to equip Lemnos and Samothrace was recognized by Turkey, according to the letter addressed to the Greek Prime Minister on May 6, 1936 by the then Turkish Ambassador to Athens Roussen Esref, following instructions from his Government. The Turkish government reiterated this position when the then Turkish Foreign Minister, Rustu Aras, addressing the Turkish National Assembly on the occasion of the ratification of the Montreux Convention, unreservedly recognized the legal right of Greece to deploy troops in Lemnos and Samos. with the following statements: “The provisions concerning the islands of Lemnos and Samothrace, which belong to our neighboring and friendly country Greece and were demilitarized under the Lausanne Convention of 1923, were also repealed by the new Montreux Convention and this thank you very much “(Journal of the Minutes of the Turkish National Assembly, issue 12, July 31/1936, p. 309). Similar assurances were given in this regard, during the same period, by Turkey to the Governments of the third countries concerned.

The status of the islands of Lesbos, Chios, Samos and Ikaria

As far as the above-mentioned islands are concerned, nowhere in the Lausanne Peace Treaty is it provided that they will be demilitarized.

The Dodecanese were ceded to Greece “in full sovereignty” by the Paris Peace Treaty between Italy and the Allies in April 1947.

Turkey is not a party to this 1947 Treaty, which is therefore a “res inter alios acta” for it, that is, a matter for other states.

According to Article 34 of the Vienna Convention on the Law of Treaties, “a treaty does not create obligations or rights for third countries” other than the parties.
The prediction of the demilitarization of the Dodecanese was made after the decisive intervention of the Soviet Union and reflects the political expediencies of Moscow at that time. It should be noted, however, that demilitarization regimes lost their raison d’être (the most important reason or purpose for someone or something’s existence) with the creation of NATO and Warsaw Pact coalitions, as incompatible with countries’ participation in military coalitions. In this context, the demilitarization regime ceased to apply to the Italian islands of Panteleria, Lampedusa, Lampione and Linosa, as well as to West Germany on the one hand, and Bulgaria, Romania, East Germany, Hungary and Finland on the other side.
Greece, like any other sovereign state in the world, cannot waive its natural and legal right to defense in the event of a threat directed against its islands or any other part of its territory. Especially at a time when Turkey, in blatant violation of the United Nations Charter, is threatening war with it if it exercises a legitimate and sovereign right under international law.

In addition to the threat of war, Turkey:

It invaded Cyprus in 1974, in violation of the provisions of the Guarantee Treaty for Cyprus, to which Greece is a party, and, despite numerous opposing decisions by the Security Council and the United Nations General Assembly, continues to maintain a significant military strength. in the occupied territories.
It systematically violates the Greek national airspace and flies with military aircraft, often armed, of Greek Aegean islands and even inhabited, a fact that is of particular importance in terms of security issues.
During the last decades, it maintains important military units with air means and landing craft in areas of the coast of Asia Minor, located opposite the Greek islands, a fact that poses a serious threat to Greece.
The above-mentioned situation, combined with the threat of war (casus belli) and the general revisionist tendency of Turkey regarding the territorial and legal status of the Greek islands defined by international treaties and international law in general, obliges and legitimizes Greece to proceed necessary defense preparation that will allow it to exercise, if necessary, the right of legal defense, provided by Article 51 of the Charter of the United Nations, and to protect the Greek islands “.

small greek islands off turkey’s coast naturally have no right to an exclusive economic zone. any such right is swallowed by turkey’s eez which incidentally also swallows the greek cyprus eez.

Islands possess the same maritime zones as other landmasses, including a territorial sea, contiguous zone, EEZ, and continental shelf. Islands do not need to be inhabited to create those maritime zones.

FANFARΟNE ? Year of the Pig ??
Reply to  verner

other than that we will raise the issue of the unjust done to our islands, them being many and the anatolian coast single – it should not be there encroaching the legit rights of our islands

the only way to fix it is Izmir being returned to greece once again
edirne city as well, it lies too close to greek border and constitutes a security risk – it should be evacuated ASAP 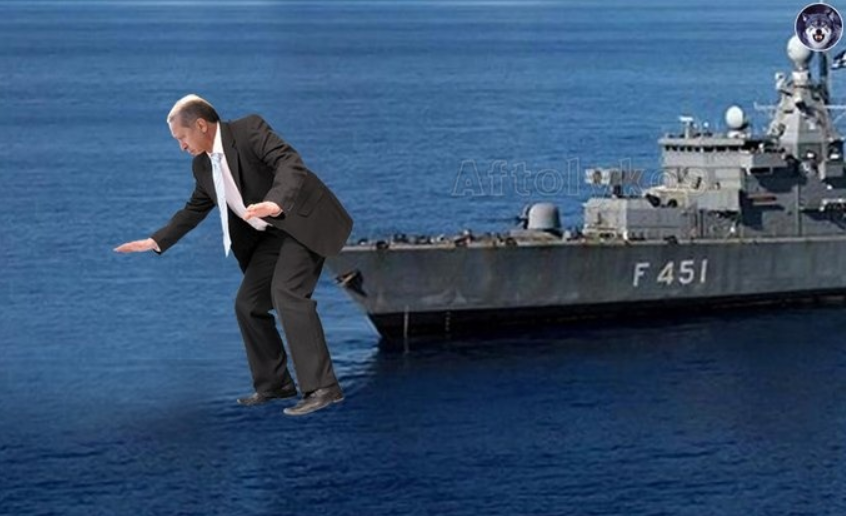 according to international law greece has the right to defende in every way greeks see fit, deploying there french A – bombs included