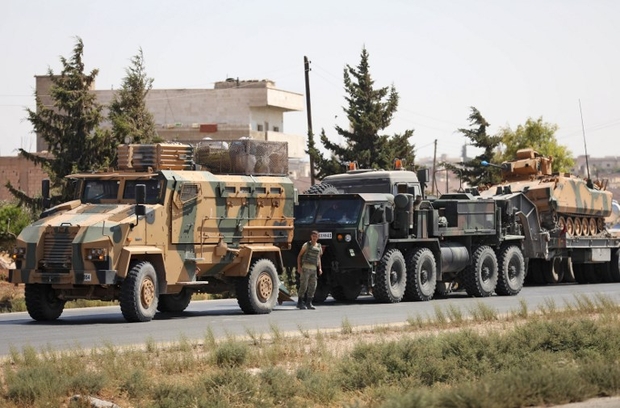 “Turkey is supposed to establish new observation posts west of Saraqib city, the Brick Factory, al-Shabibah camp on Aleppo-Lattakia highway, also a post in the area of Muhambal and a post in the city of Jisr al-Shughur,” Enab Baladi quoted the source as saying.

According to the source, all the positions are located along or near the M4 highway which links the port city of Lattakia, with Aleppo, the country’s industrial hub. A unit of the Turkish military reportedly conducted a reconnaissance mission on the highway on August 28.

Other sources affiliated with Faylaq al-Sham, which is responsible for the security of Turkish troops deployed  in Greater Idlib, claimed that the new posts are meant to stop the Syrian Arab Army (SAA) advance in the region.

Contrary to these claims, Turkey could be planning to pull its posts out of the demilitarized-zone around Idlib. This may in fact facilitate the SAA advance and even help reopen the M4 highway under the Sohci agreement, reached last year.

Earlier this week, Russia’s President Vladimir Putin met with his Turkish counterpart Recep Tyyip Erdogan in Moscow, where the two leaders agreed to continue their efforts to find a solution for the situation in Greater Idlib.

They’ve ditched the pretense and have now admitted that they are trying to sabotage the Syrian government.

Interesting. If they’re establishing new ‘observation posts’ along the M4 highway this could indicate that the Turks have given up on the southern part of the Idlib Terrorist Reservation and the M4 will be the agreed upon stopline for the SAA’s advance. Agreed upon by Putin and Erdogan. That’s what I’m taking from this.

Also, unless these posts are within line of sight of one another the SAA could still bypass these like they did before. ;-)

I wish people would calm down about these OPs, apart from being communications hubs, they have no military significance. Static positions around fluid frontlines are always in danger of being surrounded completely, with no hope of help, easy to fence in, easy to bomb even with dumb munitions, basically a sitting duck. It is no way to conduct aggressive operations. It may be Turkey’s way to “show support” for their jihadists, but it is in fact almost no support at all. There is a more subtle game going on here.

Those OB posts are only vulnerable when they don’t have civilian populations living nearby, and to the south, where most of the civilian population had already left long before that OB post was ever surrounded, that was easy to do, but it won’t be like that in the north. More than half the civilian population in northern Hama and southern Idlib had already agreed to reconcile with Assad before May of last year, so they began moving out of the areas the SAA now has control of now at about that time, so when the SAA finally got to those towns, the civilians interested in reconciling with Assad had already left the danger areas, not allowing themselves to become human shields, but the civilians in the North still chant “death to Assad”, and they’ll instead be volunteering to be human shields, and taking their innocent children with them to do the same. Erdogan wants to keep the OB posts open to help reassure the anti Assad population they have no reason to flee to Turkey, once the OB posts are gone the anti assad civilians will flee those vacated areas and head to Turkey, and I’m afraid there’s nothing subtle about that.

It’s subtle all right if you take that long to make it clear!

I tried to make you aware of some of the realities behind the situation, just because the OB post at Murak fell so easily it won’t mean all the rest will. In the south Assad has a lot more support from the civilian population and way less antagonism from the rebels/terrorists, which means some of the OB posts in the south won’t get any support at all from the local population, but to the north closer to the Turkish border, they’ll have fanatical support, the civilians will bring their children to camp beside the OB posts in an effort to protect them from the SAA.

Thanks for the effort, but it won’t change anything. Civilians surrounding those posts means militarily precisely nothing. If Turkish troops start shooting, that will make a difference. But they won’t. That’s why the civilian invaders in the North are agitating – they are starting to smell a rat, and Turkey will do nothing for them. Every Obfuscation Post will be surrounded and confined to irrelevance. Afterwards Turkey will quietly withdraw, holding his head high, AND without starting a war with Syria.

You don’t understand the situation at all, Turkey can’t afford to let in anymore refugees, if they allow the OB posts to fall to the Syrian government, all the refugees will flood into Turkey. Read some Turkish news occasionally to see just how serious the situation really is, and to understand just how desperate Erdogan’s becoming. I’m glad you feel confident the Turks aren’t going to intervene militarily but I’m not so confident, even if I do hope you’re right, but it’s looking more and more like Erdogan will do something to stop the refugee flow soon.

Turkish military on the border have been shooting at the supposed refugees from Idlibstan, so I guess Erdogan is doing something about it. He’s sending a message – don’t come here people!

It won’t be enough to stop them, a deluge is on the way now and it’s going to flood Turkey.

Please don’t come to Turkey, stay where you are, don’t pay any attention at all to those nasty SAA soldiers, we’re not going to let them kick you out of your homes, we’re instead going to build even more OB posts to help protect you, just PLEASE don’t come to Turkey. LOL it’s not going to work, because every time the SAA reclaims even just a single inch of Turkish held territory, the refugee numbers multiply exponentially, 1 inch of territory equals 1 refugee, two inches equals 2 refugees, 3 inches equals 4 refugees, 4 inches equals 8 refugees, 5 inches equals 16 refugees, 6 inches equals 32 refugees, and so on it goes until the dam bursts. Assad only has to take it easy to achieve this strategy, just enough slow advancing into enemy territory to keep the refugees moving in increasing numbers, but not so much as it would concern to the UN and make them react to Erdogan’s demands to stop him. He’s been pleading with the EU to help stop Assad too but they’re not listening anymore either luckily, and so far Putin’s done nothing to help him, and as a matter of fact today it looks like he’s actually helping Assad speed things up a little. So I don’t think a few more Turkish OB posts will actually help stop the steadily growing exodus north, in fact it may even speed things up a little, because when the local civilian population see a Turkish OB post built in their neighbourhood, they’ll know they’re probably next in line for some unwanted SAA and Russian attention, and just knowing that may be enough to make them pack up and head north, LOL,. Wouldn’t that be funny, if in all the areas Erdogan builds his OB post, the civilians actually start leaving in even bigger numbers, the exact opposite thing he intended, LOL.