Turkey has moved about 1000 units of military equipment including battle tanks Leopard 2A4 and artillery systems to the border with Syria. 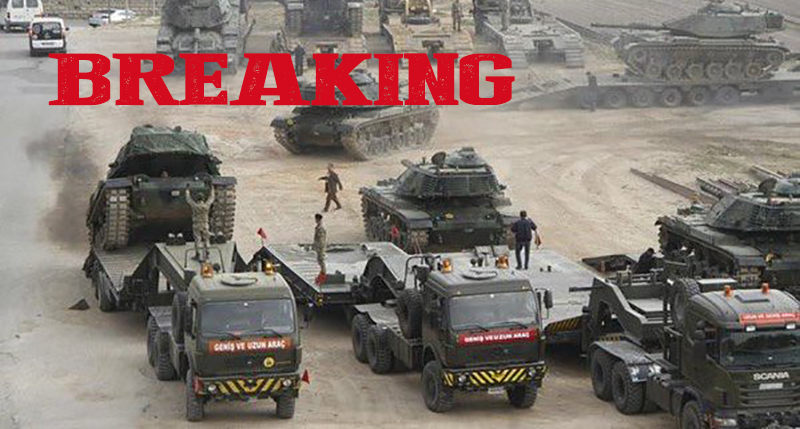 According to the reports, about quater of the Turkey’s 1st Army is already located at the Syrian border. The Russian Air Force’s base in Latakia could be a target of the possible attack.

On the other hand, relocation of troops is reported is authorized by the United States urging Turkey to deploy thousands of additional military personal along its border with Syria “to block the movement of ISIS terrorists”.

“The game has changed. Enough is enough. The border needs to be sealed,” a senior US official said of Washington’s demand to Ankara. “This is an international threat, and it’s all coming out of Syria and it’s coming through Turkish territory.”

US President Barack Obama recently ordered the deployment of dozens of Special Operations troops to Syria to “assist” militants operating on the ground.

Earlier, Moscow deployed S-400 air defence systems at the Hmeymim air base where the Russian warplanes are located. Also, the cruiser Moskva armed with the Fort SAM system which is the naval version of the S-300, took up a position off the Latakia’s coast.

In turn, Turkey sent to the border with Syria electronic warfare system KORAL (Radar Electronic Attack System) to counter the Russian air defences in the region.

The question remains what the real intention of Ankara is.

Is Turkey ready to block border or to support ISIS militants overtly or to invade Syria and occupy a part of Syrian territory.

well the real reason is Russia is bombing the crap out the the ussa/Turkey supported terrorist….and they do not want any witnesses to return and tell the story ……. ha amazing how the lies get twisted it is sad murikans will believe the lies….

95% of the U.S citizenry doesn’t even know that the U.S has been aligned with radical Islamist’s since the 1950’s and the Eisenhower administration. Most American’s have learned U.S foreign policy from watching tv which has only insured that they know next to nothing about what’s really been going on around the globe the past half century.

Very true. The CIA was hooked up with the Muslim Brotherhood right after WW2 centered around the Mosque in Munich. Also, Allen Dulles saved Nazis from justice after WW2 to work in the CIA like Gehlen. Al-Qaeda is from the MB CIA database organized to fight the USSR in Afghanistan. ISIS creation was aided and abetted by the US and its vassals Turkey, Saudi Arabia, and Qatar.

so true and I have learned more history from my fellow man here on the boards then watching anything on ussa media outlets….

Obama Administration is doing the same thing. Obama is supporting Buhari who is a radical muslim to killed Biafrans who are christians.. They have killed millions of Biafrans.. UK government are also support Buhari to Kill Biafrana and BBC and CNN are not reporting the news.. There will be 30 Million Biafrans demonstrating today 01/12/2015 ( First December 2015) in the whole Nigeria for Biafra freedom but BBN and CNN will not report it to the world.. BBC and CNN are government agents..People of the world should take note..

Of course he is, U.S/NATO geopolitics hasn’t changed since the 1940’s. It doesn’t matter who occupies the White House foreign policy does not change only the perception of change via the propaganda arm of the establishment which are the mainstream media outlets.

Can’t you see what the nigger is doing?

First he wants to disarm all Americans.

Then move in an army of fucking muslums.

PUT THIS NIGGER IN GITMO.?

I suggest getting off the Internet and reading some books, you clearly have no idea what’s been going on in your country for the past half century.,

Why is it my fault that you suck that niggers cock?

you’re not helping anything mate? this is an important fucking story, and you’re rambling on about obama? everyone with a brain hates him already, get a life.

The spiral has twisted in so tightly now, and there are so many more questions than answers out there that serious thought has to be given to how this mess is ever going to be sorted out. All parties have played games but Turkey keeps coming up all the time on my radar. Just what is their game really? All the hypocrisy and lies really has to end all round. People flee their homes? Turks v Kurds, Sunni v Shia. Assad yes no? For the west is it only about oil really? Why wasn’t the oil stopped a lot earlier along with all those web sites. Too many questions and very few answers…UK joining the bombing….bombing what, it wont be the oil fields, and Isis are too good at hiding!

the only real radicalists are the ecb and fed funding them .

Wonderful News! This will result in Constantinople being returned to Orthodox hands, and that is a good thing for the world indeed.

Turkey should be expelled from NATO.

It has endangered the security of the West, and now goes for free.

There is sufficient evidence of having collaborated with the ISIS, and have profited.

The third world war is close, and will be the excuse to expel all Muslims in the West, for security reasons.

Some countries continue to host more refugees, and spread the conflict appear in the form of civil wars.

All for Multiculturalism and alliance of civilizations.

Most experts (and military) in the West play with the assumptions of analysis, since they are paid by private companies and organizations with interest.

Putin is doing the right thing is going up, and the EU increasingly broken with Mama Merkel ahead. Nothing will wash the image to send troops to Africa, no bomb in Syria.

The enemy is within.

And Israel may be attacked on two fronts, the Muslim and the United States (it will not assist Israel in its defense). It may even be invaded like Turkey. ( Israel has purchased oil from ISIS in Turkey. )

Putin must settle the issue of Ukraine and retire. It is a mistake that will drag, but still win by many goals.

But all the powerful leaders still maintain the same policies may seem otherwise, just looking for the perfect excuse to justify their actions: to expel Muslims from the West or create one (this last, already exists today) police state.

It is only a question of time or there will be civil war in most Western countries, and the weakness appears later.

According to the political leaders of the West:

¨ We must consume … we can not change our way of life because of radical .. ¨.

And they do not know that everything has changed for some years.

According to experts and doctors …:

If Islam is anti-democratic .. Why are allowed in the West?.

Assad.do not superintend over the fall and ruins of Syria.Step down and allow a transition government to take over.If you insist on power hold,you may become the first curator if alive.Syrians will not forgive you and your generations yet unborn please.

Your a idiot,you been listening to all the bullshit the Israeli lobby have pumped out through the media to justify there aggression in it’s attempt to hold onto the Golan heights.The Syrian people were doing fine an the it’s the U.S. Israel an there puppets that they will never forgive for destroying there lives an country

But now they’re willing to start a war with Russia to keep supporting terrorism. American troops will die for ISIS.