Turkey is making final preparations for the deployment of F-16 fighter jets in al-Watiya Air Base in western Libya, new satellite images revealed.

The images, which were shared by Twitter user Observer IL on December 10, revealed that two new aprons, each with marks for six aircraft, were painted on the eastern and western parts of the air base. Turkish troops are present in the air base, which is controlled by forces loyal to the Government of National Accord (GNA).

#Libya – #AlWatiyah Airbase – Final preparations of #Turkish Air Force deployment. 2 new aprons painted on both sides of the runways. Marks on the ground indicate that the Airbase will accommodate at least 12 TAF F-16’s or other fighters. A-400m ATLAS Airlift or AAR ? #IMINT pic.twitter.com/LFLdOJfHDZ

Earlier this year, a number of reports revealed that Turkey wants permanent military presence in Libya. Ankara plans to establish the air base in al-Watiya as well as a naval base in the port city of Misrata.

Turkish forces have been rehabilitation al-Watiya Air Base for several months now, with several sources talking about a plan to deploy F-16 fighter jets in the airbase.

The Turkish Air Force operates more than 200 F-16 multirole fighter jets of the C and D variants. Ankara should have no problem deploying 12 or even more in Libya. 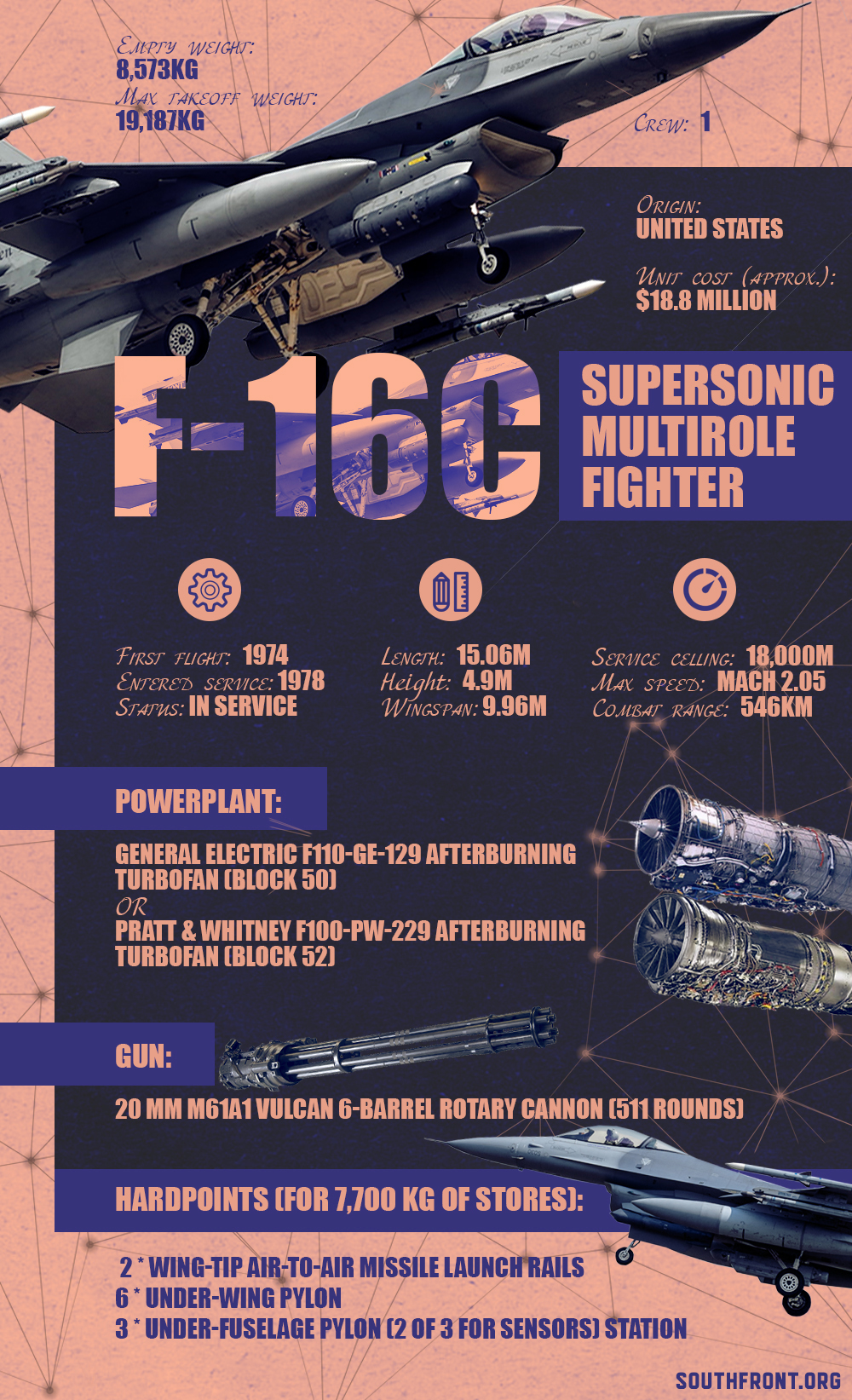 In July, pinpoint strikes of the Libyan National Army destroyed a Turkish MIM-23 Hawk air-defense system that was deployed in al-Watiya Air Base. However, Turkey didn’t back down and replaced the destroyed air-defense system within a few days, demonstrating its determination to stay in the air base.

The deployment of Turkish F-16 fighter jets in al-Watiya Air Base, if it happens, will tip the balance of power in Libya in favor of the GNA. The Turkish military buildup in the war-torn country may soon lead to a new round of the escalation between the GNA and the Libyan National Army.

Egypt should thoroughly crater that airfield.

Algeria could probably do a better job.

If they had b*lls yes, but it will be Egypt with Russian jets

Arabs are not pilot material. The Turks would wipe them out in a single day, like the Israelis did in 1967.

That is if the Turks had any pilots left after the Gulen prosecutions….they will use Probably Pakistani pilots like they do in Est Med, easy meat for the UAE Air force. But Most likely the French will take care of that place in one night!

Come on ladies, let’s compromise… the Egyptian and Algerian air forces can share in the bombing and the UAE can pay for the whole operation. It’s a win, win, win.

Algeria has the best military in Africa, but is friendly to Turkey and has major problems with the French vassal state of Morocco. It has no interest in Libya but a stable border. Algeria is happy to have Turkey keep the Egyptians and UAE out of Libya.

Egyptian military could not even fight desert camels, let alone attack a well defended airfield. Turkey is within its rights to support the internationally recognized Libyan government with any means required. Soon most of Egypt will be a no fly zone.

MiG-29M’s have all Russian most modern short, medium and long range missiles and from that side Turk F-16 are totally out gunned ! Also Rafale is also superior to Turk F-16 block 50

Mirages? Ever heard of Sukhoi?

SU-35 are vastly superior by far but…. The only problem is that Egypt is in process of acquiring them and have received only few of them.. Sufficient for training… I doubt that any SU-35S will see air combat soon, because it takes time to train pilots on top high end air-superiority fighter like that one. To use it to the fullest possible capacity .

Yea I think Mig-29 would do against F-16, with a competent pilot, meanwhile Turkey uses Paki pilots lol

Seriously?!!? So where are the Turk pilots? All arrested by Erdogan, rotting in prison?!

Turkish pilots themselves are not too shabby, but the Pakistanis are best as they have been blasting Russian and Indian MIGS and Sukhois out of the skies for a better part of 50 years now. Russia has lost more MIGS and Sukhois to the Turks and Pakistanis than anyone else.

I’m sorry when were Russia and Pakistan at war?

The Israelis beat the Egyptians 3 times in a row and Turkey has a far bigger strategic mass and allies. Arabs in general are simply not good soldiers as they lack modern education to operate complex weapons systems or have intellectual capacity to plan a modern combined arms operations or conduct complex strategic planning. Turkey is a first rate NATO military and will destroy Egypt just with its drones and IAI Harops.

You sound like a teenager with war fantasies. Most people who have seen the horrors of war would not wish them on their worst enemies. You need to grow up.

Why would I need a war? Probably you confuse me with someonelse.

Egypt has Rafales, but will never take on Turkey as it will bring in the Pakistanis who have the best pilots in the region and operate alongside the Turks and fly similar F-16. Arabs are no match for either Turks or Pakistanis.

No worries Egyptian air-force is crap…Real-deal is Uae and its endless funds..

my bad ı had to elaborate it… distance between the nearest Eypt airport Sidi Barrani to Sirte 920 km to Vartiya 1325 km and since Eyptian air force hasn’t military aerial refueling aircraft they can’t use its air-force effectively through these distances…if they give these equipment to Haftar its another case but ı dont think so because Uae already purcahsed super tucanos to support Haftar…Egypt will not choose such radical decision..

Qatar backs Turkey … he doesn’t have the ??? to play in Libya … hello?

Egypt isn’t going to use their planes … hello?

Your future is sealed

Why is it crap, they have F16 galore like Turkey, MiG 29, Raphale. Turkey’s Air Force is crap relying on old F16’s, Russian MiG 29 based at Juffra base to be used for the LNA will take care of the Turkish F16’s.

Crap because such an air-force must have military refueling aircraft to operate effectively…they still dont have tanker planes..and all their f-16’s doesnt have AIM-120 AMRAAM and AGM-84H SLAM-ER..

Rafale 12 units+12 unit optional.. MICA BVRAAM and Armement Air-Sol Modulaire (AASM)..these are effective missiles but still not too much only 12 units rafale… the other 12 option is dependent to Usa because egyptians wants to get Scalp cruise missiles(export version Black Shaheen) but the components of this missle are usa and Usa dont allow yet.

They can be deployed in al Juffra in large numbers and with the s300 V4 air defense umbrella pound the crap of the Turkish air base.

Right, that is what the French said about German tanks crossing the Ardennes.

It does not have effective BVR capability.

Oh boy … can’t wait to see which planes and which pilots are better?

It will bring in the Pakistanis on Turkish side and will be a disaster for either Egypt or Russia. I am highly doubtful that either Sisi or Putin have the balls to take on the Turks and Pakistanis.

You muslims are sick … dreams of conquest … lol

In 2019 pakistan shot down indian mig21 with turkish suplied rockets .They tested indian defence like azeri in 2017.

So? What’s your point?

India’s Army is weak ? They’re attempting to improve it … buying Israeli anti-missile systems and other arms as well …

They are deploying f16 and drones in Pakistan to help fighting india.

Turkey has nothing to offer Pakistan but empty words. China can provide Pakistan economic help and superior weapons.