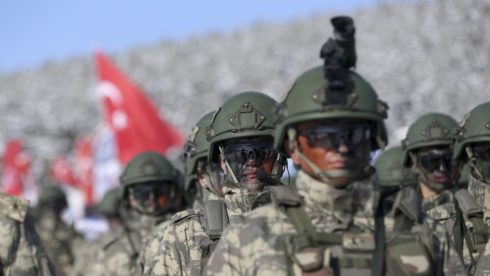 There have been several reports over the last month claiming that after initially supporting the Saudi-led campaign against Yemen and subsequently distancing itself from the campaign and arguing in favour of negotiations to find a political solution, Turkey has been surreptitiously increasing its involvement in the conflict in Yemen, largely through ‘soft power’ projection.

Although most analysts agree that a large-scale intervention in Yemen is beyond Turkey’s capabilities, both due to Turkey’s already heavy military commitments in Syria and Libya and the controversy caused by Turkey’s attempt to assert control over large areas of the eastern Mediterranean claimed by other States, as well as to the logistical barriers to delivering supplies to Yemen, there is increasing concern that Turkey is attempting to influence developments in Yemen for its own benefit.

The increasing attention being paid to the possibility of significant Turkish intervention in the conflict in Yemen follows the dramatic battlefield successes of the GNA due to the massive support provided by Turkey after concluding an agreement granting Turkey expansive resource rights in the eastern Mediterranean, raising questions as to whether Turkey might be considering expanding its involvement in Yemen, either as part of the ‘proxy war’ against the United Arab Emirates and Saudi Arabia in particular or in order to gain control over infrastructure and/ or resources in the geo-strategically vital area.

The rivalry intensified considerably after Saudi Arabia, the UAE, Bahrain and Egypt severed relations with Qatar and attempted to impose a blockade on the country in 2017, in response to which Turkey provided critical support and supplies to Qatar to enable it to withstand the pressure.

Turkish relations with Yemen have a long history, as noted by the Turkish portal TRT World in 2018:

Ankara’s efforts to expand Turkish soft-power in Yemen faced major setbacks due to the Houthi takeover of Sanaa in 2014, and the subsequent entry of the Saudi-led military coalition into the country’s civil war, of which Ankara has not been a major actor. Nonetheless, Yemen remains important to Turkey’s leadership.

Based on Ankara’s geostrategic interests in the Red Sea and Bab al Mandeb coupled with historical connections rooted in the Ottoman era that bond Turks and Yemenis, Turkey has high stakes in the future outcome of Yemen’s political environment and the unfolding humanitarian disaster.

When the Saudi-led Arab coalition launched Operation Decisive Storm in Yemen in March 2015, Ankara uncovered that it was previously informed of the operation, signaling close cooperation and coordination between Ankara and Riyadh at that point…

Furthermore, Ankara vowed to provide the Saudis with intelligence and logistical support in Yemen, yet no direct military support. Ultimately, Turkey’s decision resulted from officials in Ankara believing that Riyadh lacked any clear vision with respect to the Saudi-led coalition’s end game.

From that point on, the Turkish role in the Yemeni crisis has varied in scope and type shifting between security, politics, diplomacy, and humanitarianism depending on the situation on the ground and Riyadh’s position vis-a-vis Turkey…

The ongoing Qatar crisis has changed the regional geopolitical landscape back to 2013-2014, only for the worse. The GCC’s diplomatic row has created more splits in an already-torn Yemen, cracks in the Yemeni government and rifts with the partners including the Islah party and Qatar, which was expelled from the Saudi-led military coalition in the immediate aftermath of the GCC crisis’ eruption.

Not only were the Islah party and Qatar’s efforts important in terms of fighting Houthis and countering Iran’s influence in Yemen, but both were also allies of Turkey…

Now Turkey is keeping a rather low-profile role while focusing instead on the urgency of Yemen’s humanitarian crisis… Once the dust settles in Yemen’s civil war, Turkey may return to being a far more influential player in the country due to the reach of its soft-power. LINK

A report by Mintpress raised doubts as to whether the humanitarian assistance provided by Turkey has served as cover for other supplies of a military nature, and claims that in addition to frequent diplomatic and intelligence interactions between Turkey and political factions in Yemen Turkey has helped establish and equip several military training camps:

In Taiz, Turkey has opened training camps, the most important of which is located on the outskirts of the al-Hajariya Mountains near the Bab al-Mandab Strait and is run by Hamoud al-Mikhlafi who resides in Turkey and regularly visits Qatar. Al-Mikhlafi also established the “Hamad Camp” in the Jabal Habashi District. Shabwah, and Marib have also received Turkish support.

Turkey has been supporting Yemen’s El-Eslah Party, founded in 1990, since before the Saudi-led Coalition launched its offensive in Yemen in 2015. Similar to its support for the Government of Accord in Libya, El-Eslah has gained additional momentum in recent years given the power and money it has received from both Turkey and members of the Saudi-led coalition. LINK

An article in the Middle East Monitor evaluates the competing assertions and comments:

The Emirati-financed Arab Weekly, meanwhile, has been particularly vicious over the past three months, with articles accusing Turkey of building up its presence in Yemen, specifically in support of the Muslim Brotherhood-affiliated Al-Islah Party. The allegations against Ankara include Egypt’s growing concerns such as Turkish “interference” under the guise of humanitarian aid operating in three southern coastal regions and a joint “Qatar-Turkish plot” to establish a militia recruitment camp in the Shabwa province.

In the paradoxical world of Middle East alliances, Saudi Arabia is hostile to the Brotherhood and, along with the UAE, financed the military coup which overthrew Egypt’s first civilian President Mohamed Morsi who was affiliated to the movement, and yet actively supports Al-Islah militia which function as Hadi’s main fighting force on the ground against the Houthi-aligned Yemeni army.

Turkey may well extend limited assistance to Al-Islah, but it is unlikely that the party will jeopardise its support from the Saudis…

The UAE has long been accused of attempting to annex the Yemeni island of Socotra to secure what it perceives to be its geopolitical interests in the Red Sea and Gulf of Aden. It already has military and naval bases in Djibouti, Eritrea and Somaliland.

Turkey, of course, has its largest overseas military base located in the Somali capital Mogadishu as well as its largest embassy. Logistically speaking, therefore, it is plausible that it could be preparing for a “Libya-like” operation in Yemen, also against UAE-backed forces.

As we have seen in Libya, Turkey has taken drone warfare to another level as have, to be fair, the Houthis in Yemen. Perhaps as a precursor to future operations, a Turkish-made Karayel drone was downed by the Houthis over Hudaydah province in December… LINK

Although Turkey’s capacity to intervene directly in the Yemen conflict is limited, if even a part of the claims of increased involvement are correct Turkey could obtain significant leverage from its ‘investment’ if its allies can turn that support into military gains.

Turkish forces are yet to finish the job in Libya. The LNA are going nowhere and can attack anytime, anywhere. It’s their country. They can simply dig in and wait for providence to throw them a bone. The Turkish forces could find themselves in a similar position to saudis forces in Yemen. In a way, it’s a pity that Turkish forces will not pit themselves against the Houthis. The Houthis footage has been interesting.

Since the Turkish admin is now getting its blood money for suppressing the will of the Libyan people, securing its oil transport routes seems to be why they are so interested in Yemen. Turkish Humanitarian Aid to Yemen? i would want the Turkish admin to spell that before i believed it.

It seems that Turkey is determined to project its power throughout the region. A growing and self sufficient military makes Turkey more immune against blackmails and threats of sanctions from colonialist west and especially the US. If Turkey can secure Libya and its oil this will definitely change the Geo-politics of the eastern Mediterranean and especially the quest for which countries will exhume the gas deposits from under the sea. If Turkey succeeds, Turkey’s future is bright in terms of both financial and militarily power. I don’t think countries like Greece or Egypt stand a chance. The only serious contender could be the French navy, but Macron has problems at home and the French people will not give a “carte blanche” to Macron for such an adventure. Turkey is destined to be a power to be reckoned with in the 21st century.

Remember Turkey is a NATO member. I believe the Turks have NATO blessing. Silence is golden.

Erdogan is blackmailing EU powers with refugees, thats why he can do whatever he wants.

Turkey was on the outs with NATO countries. Turkey was sanction. Now all of a sudden Turkey is wielding their sword. We don’t hear a beep out of any of the NATO countries. What changed? Russia has said very little. Sauds and others were fighting Turks. Powers at be have given the Turks a green light to go out and do their bidding. Good article.

Talk to talk, Turks are not interested in free Yemen, nor they like Ansar Allah…they are interested in mess, dim and stir all over the place, and they’re doing this because America told them so… And it is far beyond theirs capabilities…

Go ahead, waste your money and lives. No foreign forces are ever going to win in Yemen.