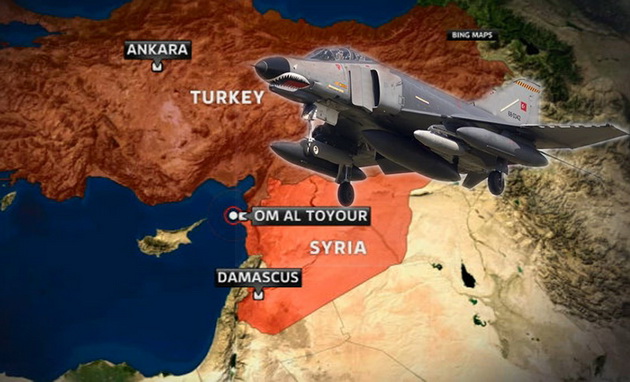 When the Turkish warplane shot down the Russian bomber in the sky over Syria, the Russian economic sanctions were put into effect against Turkey on the 1st of January this year. The Turks decided not to impose the same sanctions on Russia. They rather decided to complain to the World Trade Organization. The statement of the Turkish Economy Minister, Mr Mustafa Elitas , sounded quite extravagant where he said that when it comes to exchanging of goods a “moral obligation” must exist. Russian Economic Development Minister, Mr Alexey Uyukayev, said that the sanctions of his country are in accordance with the Statute of the World Trade Organization which approves these kind of sanctions against a country which is at the same time a member of the World Trade Organization and a threat for the national security. Mr Erhan Aslanoglu, a Turkish Economist, estimates that Turkey could lose over 10$ billion due to the Russian economic sanctions.

These deteriorations of diplomatic relations between Russia and Turkey surprised many but one has to admit that the Russo-Turkish economic co-operation did not have the power to abolishe the political disputes of the two countries, which over the time got even bigger due to the Syrian crisis. In the spring of 2015 pro-Turkish, pro-Saudi, and pro-Qatar armed insurgents, who have been operating in Syria, now act as a unified armed formation. In summer and at the beginning of autumn the Syrian Government found itself in a difficult position: after Palmira fell and when the encirclement of Damascus started the rockets also began to find their way to the capital’s square.
Since the establishment of Turkey, every Turkish regime has been aiming at Iraqi Kirkuk and Syrian Allepo and with the help of the “Arab Spring”, which was created by the Americans, it seemed as these aims could come true. Ankara’s next step would be the creation of a restricted flying zone controlled by the Turkish Army over the Syrian sky where the puppet Government (AKA “Transition Government”) could act. Meanwhile, the military campaign of the Russian Air Force, started on the request of the Syrian Government, turned the tides of war and changed the international views of the Syrian crisis. 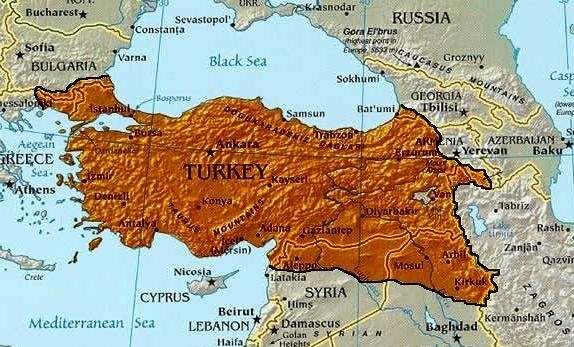 The borders of the Greater Turkey from 1920

By putting their trust in radical Islamists in Syria the Turkish Government did not consider the consequences. As a result the relations between the Turkish Kurds and the Turks in Turkey are getting worse every day. Many Kurdish cities in the southeastern provinces of Turkey were besieged and four large cities along with the suburbs are the main targets – Diyarbakir, Jizra, Silopi and Nusaybin. 10,000 Turkish soldiers supported
by heavy weaponry took part in these military operations. The Kurdish resistance clashed with the Turkish soldiers and during the first days of the siege both sides counted over 100 dead while the Kurdish officials have not stated their demands. The police curfew, which was enforced half a year ago, stopped the life in Diyarbakir completely.

For that time, while the Syrian town of Kobane was under siege from the Islamic State terrorist organization, the Turkish officials, who have been sabotaging negotiations with the Kurds since the autumn of 2014, are still prosecuting the “enemies” of the state – the Kurds.

The meeting which was held in Moscow between Mr Selahattin Demitras, the Chairman of the People’s Democratic Party in the Turkish Parliament, and Mr Sergey Lavrov, the Russian Minister of Foreign Affairs, aggravated Mr Erdogan who accused Mr Demitras for treason. Also those Kurdish politicians who agree that southeastern provinces should be more autonomous, have started finding themselves in front of Turkish courts. And
while Moscow is being accused of supporting the Kurdish separatists movement officials in Ankara welcomed Mr Mustafa Abduldzhemil Dzhemilev, the Chairman of Mejlis of the Crimean Tatar People.

The President of Turkey, Mr Erdogan, showed his support to the ultra-nationalist Turkish organization – the Grave Wolves – whose fighters had found the way to the borders of Russian Crimea. The long lasting hatred and disagreements between Turkey and Israel have vaporized too due to the Leviatan project. Not fulfilling his goals by visiting Turkmenistan, Mr Erdogan announced upon his arrival from Riad that he will take part
in the International Meeting regarding the nuclear security issue in the USA on the 31st of March. Ankara’s interest in the technology for making nuclear rockets can be seen as a serious issue. Also the intentions of redirecting the export of agricultural goods from the Russian market to the markets of the Middle East and even Africa (Kenya, Tanzania, Ethiopia and Nigeria) have been announced, although financial losses of Turkish firms
from the loss of the Russian market can hardly be compensated.

Besides all of this, Moscow’s view when it comes to the Russo-Turkish bilateral relations has not changed – they can be again on a friendly level. But for restoring bilateral relations the Turks must apologized publicly for the incident, make it up for the material damage they caused and prosecute those responsible. Does the common sense prevail in Ankara? The honest answer is that chances for ”Yes” are quite weak. When MAK Danismanlik – a Turkish company – conducted a survey which was related to the incident, 65% agreed that shooting down the Russian bomber was a right thing to do.

In the months ahead the military campaign of the Russian Air Force aimed towards the insurgents (terrorists) will be probably obstructed by Ankara – Doha – Washington – Riyadh. As military provocations are some of the many tools of obstruction aimed against the Russian Air Force, also the deterioration of bilateral relations is used to undermine any possible political agreement.

Attempts of overthrowing the Government of the Syrian President, Mr Bashar al-Assad, will continue by the usage of the Turkish weapons and armed formations, the submission of the Turkish Kurds and by establishing a close connection with the Iraqi Kurdistan which helps with smuggling the Syrian and Iraqi oil to Turkey. The greater aim is to reshape the political map of Syria and Iraq and to fulfill the wicked ideas of neo-Ottomanism – to recreate the old Ottoman Empire.

It is obvious that in the new year Turkey will continue to be one of many destabilizing factors in the Middle East along with the Syrian-Turkish border. At the same time the situation became better for the officials in Damascus. A hope remains that the Turkish supply channels, used to supply the terrorists, will be shut for good. In Turkey the Kurdish question has become a burning issue. Norman Stone, the Director for RussianStudies at Bilkent University, said: “Ankara is becoming far bolder with its foreign policy. Provoking Russia over Syria may be a step too far.”