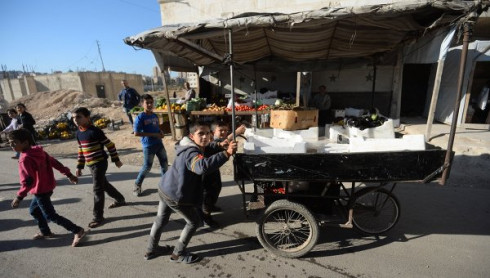 Original published by RIA; abridged translation and analysis by J.Hawk
Turkey’s Prime Minister Davutoglu called on the country to return its historical debt to “Aleppo brothers” who defended Turkish cities during World War 1.
Akhmet Davutoglu said that the country intends to defend Syria’s Aleppo, referring to it as the return of a historical debt. <…> “We will return our historic debt. At one time, our brothers from Aleppo defended our cities of Shanlyurfa, Gaziantep, Kahramanmarash, now we will defend the heroic Aleppo. All of Turkey stands behind its defenders,” Davutoglu said at the meeting of the Party of Justice and Development parliamentary faction which he heads.
J.Hawk’s Comment: Davutoglu is only the Prime Minister, not President, of Turkey, which means his statement carries less weight than even the words of the Foreign Minister. Is Davutoglu therefore preparing the ground for Erdogan’s upcoming statements, making statements as trial balloons, or is he perhaps trying to pressure and goad Erdogan into more aggressive action? The relationship between Erdogan and Davutoglu bears closer scrutiny in order to ascertain which of them is the more hawkish or dovish of the two (it would be very unlikely for them to have an identical view of the events in Syria), particularly since they are doing their level best not to show any public differences of opinion.
One way or the other, regardless of what is behind Davutoglu’s words, the formulation of “Aleppo brothers” represents a major change in Turkish rhetoric. The proposed Turkish intervention in Syria is no longer being framed in terms of fighting terrorism or even humanitarian assistance. Instead, it is framed in terms of reunification with long-lost “brothers.”

Well if the ottomans invade Syria I hope they will feel the wrath of Mother Russia. There will be revenge for the old SU-24.

Yep, the last sentence tells everything.

.. and if NATO, US, EU don’t put sanctions on Turkey for violating an internationally recognised border?

And for the massacre of about 500 civilians Kurds in a military operation, the butcher of Ankara has to be target for regimen change for killing his own people and implement economic sanctions a not fly zone in Turkey.

This is a real photo that sums it all up. “A picture is worth a thousand words, and truer words were never spoken”. http://en.farsnews.com/

If they are dumb enough to invade then syria will declaring war would be the outcome is my guess. As soon as they cross the border they threaten russia’s forces.