While the international community makes attempts to restore the peace in the Nagorno-Karabakh region, Turkish President Recep Tayyip Erdogan fuels it by supporting the side of the conflict. 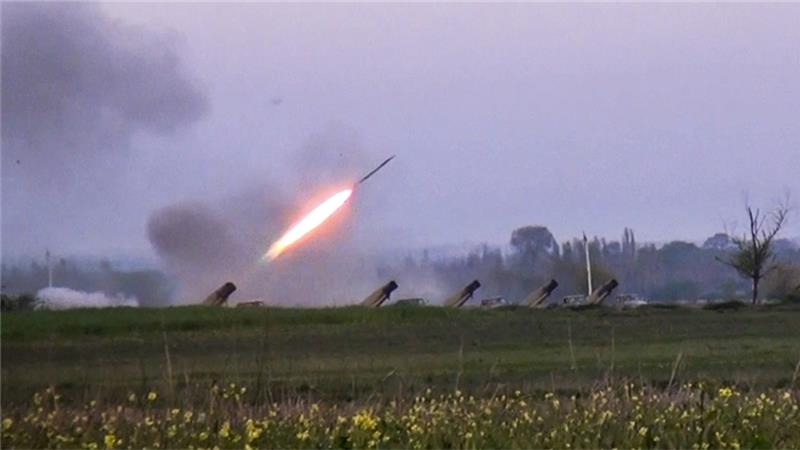 In this image made from a video released on April 3, a Grad missile is fired by Azerbaijani forces in the village of Gapanli, Azerbaijan [AP]

On April 4, Turkish President Recep Tayyip Erdogan stated that Turkey supports Azerbaijan in the Nagorno-Karabakh conflict. He also added that the disputed region will ‘inevitably’ return to Azerbaijan:

“Turkey has stood by Azerbaijan from the very beginning of the Nagorno-Karabakh conflict. At some point, Karabakh will inevitably return to its rightful owner and become a part of Azerbaijan again.”

On April 2, Azerbaijan and Armenia reported heavy fighting in the disputed Nagorno-Karabakh region and acused each other in violation of the ceasefire. The sides use heavy military equipment and aviation.

In other words, the way things are….

from the very beginning of the Kurdistan-Turkey conflict… At some point, Kurdistan will inevitably return to its rightful independence….

The Turks are Sunni, Azeris are majority Shia, but not very religious at all. The regime in Az is autocratic and fully corrupt. It would suit quite a lot of countries if this conflict was to result in the shutting down of the Baku-Ceyhan oil pipeline, as 1 million barrels a day taken out of world oil supply. The pipeline runs very close indeed to Nagorno-Karabakh in the north and it is only about 1 metre deep in many places. Who would benefit from higher oil prices? All producers, especially Russia, Sauds, Iran, USA etc, but Turkey would be hit hard by the closure of the parallel gas pipe which supplies Turkey with gas. IS would benefit from higher oil prices certainly. So would Erdogan family’s illicit trade with IS in stolen oil. It is looking like the major ISIS conduit of raw opium from Afghanistan to Turkey via Pakistan (Baluchistan)-Iran (Kurds)- Iraq- Syria ISIS will be blocked in Syria by the PYK in the near future. Most of it is refined into high grade heroin in Turkey then shipped all over Europe including the UK where the distribution is handled by Turk and Kurd gangs. It may well be that the crims involved, are looking to reroute the drug traffic to Turkey through Azerbaijan and Georgia. The area smells- Armenia is already the principal source of “Ice”(Methamphetamine) for the global operations of the Calabrian mafia- the Camorra. A lawless situation already exists in Georgia, while the dictator in Az has a serious revenue problem from low oil prices, a two product economy-oil and gas. A few billion a year from drug transit facilitation might be welcome to people so amoral.