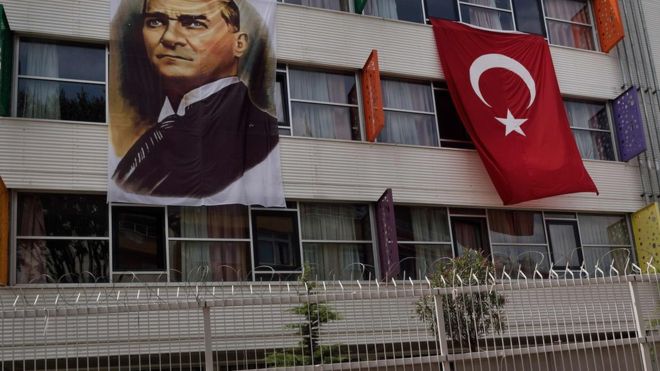 A portrait of Mustafa Kemal Ataturk hangs next to a Turkish flag on the outside of a religious school in IstanbulI. AFP

21,000 teachers were fired and all the country’s university deans were told they faced suspension in Turkey on Tuesday.

Just look at the numbers:

The purge followed the failed attempt of military coup against President Recep Tayyip Erdogan. Ankara says Fethullah Gülen, who wields enormous influence in Turkey through loyalists in various parts of the state as well as a private school network, masterminded the attempt from his home in Pennsylvania.

“I’m sorry but this parallel terrorist organisation will no longer be an effective pawn for any country,” Binali Yildirim, Turkish PM, said.

French revolution, Iranian revolution, China’s Cultural Revolution, Cambodian purge by the Khmer Rouge, 1965 coup attempt in Indonesia, American revolution, etc … its all the same game of consolidating power by purging the old and creating the new. Collateral damage be damned.