It is codenamed after an 11th century Turkish military commander who ruled an independent state during the Byzantine era, and the information was revealed by secret documents unveiled by Nordic Monitor.

Turkey has a plan for the invasion of Greece, secret documents reveal https://t.co/3WudrD3QYv

The final date of the operation is specifically that: June 13th, 2014, but it is likely that it was a redaction or a final version, of a document that was years in the making. A different slide from the same secret document lists Turkey’s military offensive plans against Greece and Armenia with corresponding dates indicating when they were drawn up: According to the outlet, these documents were uncovered in a court case file in Ankara, where “investigating prosecutor Serdar Coşkun, a loyalist of Turkish President Recep Tayyip Erdoğan, appears to have forgotten to remove the classified documents before submitting them to the court.”

They were apparently collected from the General Staff HQ during an investigation into the failed July 15th, 2016 coup.

These documents were exchanged between members of the General Staff via secure email. Coşkun ordered the military to forward copies of all email messages for the previous two months including the encrypted ones, on August 1st, 2016.

On August 11th, the prosecutor assigned his assistant, police officer Yüksel Var, to collect emails General Staff’s internal servers and report back to him.

A commission investigated for a bit over half a year, until February 14th, 2017.

In the end, the indictment filed by prosecutors Necip Cem İşçimen, Kemal Aksakal and İstiklal Akkaya in March 2017 with the Ankara 17th High Criminal Court included all the emails collected from General Staff computers.

The document regarding the plan to invade Greece bears the name of a popular war hero in Turkey, Caka Bey, the man who led the first-ever Turkish military expedition in the Aegean. Turkish President Recep Tayyip Erdogan’s government has been promoting Caka Bey for a while now.

House Speaker Binali Yıldırım, another Erdogan loyalist who has served as prime minister, launched a campaign in 2010 to commemorate Bey’s achievements.

The document discovered recently does not have any details other than the name and the updated date of the plan.

They were likely marked “top secret” and could not be shared through the intranet system run on the email exchange servers of the Turkish military.

According to Nordic Monitor, the Power Point document appears to have been prepared for presentation at headquarters as a contingency plan with regard to military developments in Syria.

The Turkish military was assessing its capabilities and troop commitments according to various planning directives in effect. They wanted to maintain their offensive and deterrence capabilities on the western front while moving some troops and equipment to the Syrian border.

Furthermore, there were alarms sounding that the documents had leaked. This is seen in a warning letter from March 8th, 2017 by Lt. Gen. Ugur Tarcın, head of the General Staff Communication, Electronic and Information Systems (MEBS).

Tarcin allegedly warned the legal department of Turkey’s General Staff that the documents contained secret documents regarding the country’s national security, including classified intelligence reports and operations in Syria and the eastern Mediterranean.

He said the documents [pdf] must be kept secret and not be shared with any unauthorized individuals.

Acting on the advice of the MEBS commander, the General Staff’s deputy legal counsel Col. Aydın Sevis wrote [pdf] to the Ankara 17th High Criminal Court on August 24, 2017, repeating the same concerns about the secret documents, and urged the establishment of a commission to screen the documents. According to the short memo drawn up by the inspectors to brief the General Staff, the secret plan was finalized on July 13, 2001.

It was prepared by the 2nd Tactical Air Force Command as part of the OĞUZTÜRK air offensive plan of the Turkish Air Forces in order to complement the Turkish Armed Forces (TSK) directive code-named “ALTAY” for an offensive against Armenia.

It appears that the ALTAY plan was a general action plan drawn up by the TSK and that each force command had its own part under the directive.

It is quite upsetting that Russia and Iran have been spared from the goat fucker idiot Erdogan’s delusional expansion plans. I would have thought that both of these were such easy targets for the great neo Ottoman imperial invasion plans :) All the other smaller neighbors get a chance to get invaded by the squawking Turkeys, pure discrimination. 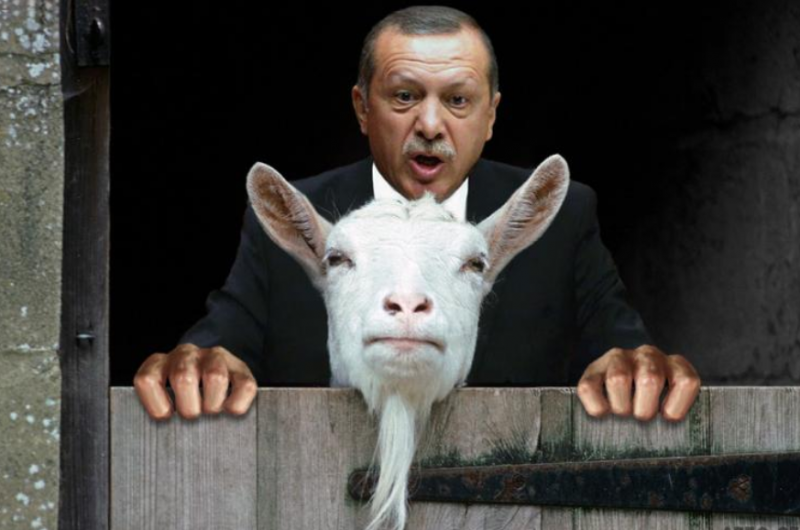 Cry butthurt, you are the goat here

That is a Muslim Goat stupid!..have you seen the beard?…

Guess what, goats have no religious. But you are the guy with butthurt so it means you are the goat which is fked up

No because I am not Muslim..and that Goat is Muslim and Turquic race…

and once iran and turkey (and russia) have sorted the immediate obstacles they can join forces and evict the jews in palestine for good and return palestine in its entirety to the palestinians and set out the borders to syria and lebanon and develop the gas under the palestinian seabed (presently stolen by the jews) to the benefit of palestine. the jews don’t have an inkling of a chance to maintain the territory they have stolen and killed for (true jewish fashion) and where they have executed an ethnical cleansing program ignored by the disjointed states of morons and the eu and operated concentration camp Gaza,with impunity.

your mamaa enjoying herself ageing

Being two nations which have had a history of violence towards each other, I’m pretty sure both Greece and Turkey are constantly reviewing and planning out the next war. An invasion scenario is a possibility.

BUT a war plan against Armenia was probably more recent (think the Nagorno-Karabakh war – 1988 to 1994) where the Turks were clearly siding Azerbaijan. I seriously doubt Turkey would take on Armenia as long as Russia has military assets in the latter. Artillery bombardment or commando strike maybe, but I seriously doubt an invasion.

I remember something those days about Turkey and the republic of Azerbaijan (Arran) join together. Maybe the plan to invade Armenia was part of it to complete the land bridge.

Turkey’s ambitions didn’t stop there. They were following a “Pan-Turanism” ideology, they wanted to have all the countries that had Turks, as far as Mongolia and naturally, both sides of the Caspian sea. Now they follow an even weirder version of Pan-Turanism with Islamism dressing on top, but major attention is given to their immediate surrounding for now. Now they have water. They need oil and steppe and all is candy for them.

The Turks can dream big but they have zero chance of making it happen.

I doubt that a war with Greece would be tolerated by the EU or NATO—an economic and geopolitical disaster for the turkeys…armenia impossible; 5000 Russian troops are stationed on the turkey Armenia border—were turkey to cross into Armenia Russia would obliterate the turkeys

You can be sure that every single country which has ambitions have these kind of plans, but they are just plans for the worst scenario. Those plans created for if that time comes and countries have to fight. Invading a country in mass scales would be disastrous for the invader in this century, that’s a fact. Unless there is a WW3 don’t expect such a thing.

Ordo ab Chao needs all kinds of chaos, why not this one too…