On October 28, a convoy of the Turkish military, consisting of more than 20 armored vehicles, trucks and engineering vehicles, arrived in the opposition-held part of the northern Hama countryside, according to the Syrian news outlet Enab Baladi.

The pro-opposition news outlet said that the new troops were deployed in the Turkish observation posts in the towns of Murak and Shir Mughar. The Turkish military established these posts earlier this year as a part of an agreement reached during the Astana talks.

Earlier this month, Syrian opposition sources reported that the Turkish military is strengthening its observation posts within the demilitarized zone around the northern governorate of Idlib, which has been established under the Russian-Turkish deconfliction agreement.

Instead of forcing radical militants to withdraw from the demilitarized zone, Turkey appears to be taking advantage of the deconfliction agreement to boost its influence in the opposition-held area in northern Syria.

The Syrian people welcome us. the children always wave to our Turkish soldiers.

The kids wave because they are scared of the Jihadist rats and like to see large armored vehicles going down the street. But will Erdogan clear out the DMZ? If not, the SAA will do it. :)

they retook over 90% of territory from daesh, besides, most of the SAA was sent to idlib, had they gone to al-safa instead, we wouldnt be talking about it anymore

Help from Russia,Iran .hesbullah with out there help saa doooom long gone

And without help from FUKUS, israhell, shitty Arabia, and turkey, Isis and al Qaeda and other rats looooong gone

It’s good, the demilatirized will be controlled by russian and turquish special troops, if there is going to be any demilitarized zone.

Fact one: the demilitarized zone it’s all in takfiri occupied territory. Fact two: the russians are not building apache forts as the turkish and the yankees. Fact three: Syria is not Texas.

Turkey-Russia are creating a safety heaven for terrorists is Idlib, nothing else nothing more. However, Russia will regret later to has done this (after their planes in their basis been blown up).

As I said, I completely disagree of your opinion. We have only to wait to see what is going to be blown up.

He’s been droning on with this nonsense for years as the Syrian government coalition has steam rolled the opposition, and first backed the baby rapers out of Syrian airspace and now shut down their attacks entirely for going on two months.

You’ve been criticizing Russia for the past two years that I’ve read your comments, and during that time the government foot print has doubled. Do you get paid in shekels or are you just stupid?

Abuqawa has made in this discussion section and observation that I do no want to repeat it, just read it. My critic to Russia is behaving very very soft with respect to Turkey USA Israel and had allowed (mainly Israel) to attack freely Syria despite Russia knows that: Israel-Turkey-USA are the main ISIS-Daesh-Terrorists supporter in Syria. Turkey had smuggled oil and industrial part of Syria, Turkey brought down a Russia airplane, Turkey invaded (agreement with Russia) north part of Syria, Turkey continue building up its army in north part of Syria. With the new Turkey-Russia agreement on Idlib, Russia is allowing Turkey and terrorists to take over the whole north part of Syria, and to make the terrorists to feel save in this area. Form this area the terrorists can send suicide bomber anywhere on Syria land, and to attack Russia airfields (as is right now doing with drons and with the help of USA). In other words, this is an implementation of the partition of Syria since Russia will not give airsupport to Syria to recover SDF (USA) occupation area. However, Russia is a master on negotiation, let us see what will come.

Right now Russia is doing what it had to do since 1996 (shielding the Syria air space for USA-Israel-NATO attacks). Syria must get rid of terrorists and Turkey in Idlib, if Syria wants peace and security in this country. None deals none protection to terrorists and Turkish

Do you want to go die clearing areas that Russia and Turkey are clearing with far less blood shed than if Turkey wasn’t helping? Do you want to die shutting down the SDF partition project in Affrin when the Turks did it with far less loss of life. How many more would die following the Rambo plans from people like you? These aren’t green plastic army men in a play yard sand box.

Show us your Rambo plan sand box commander with the cost in lives and money.

If someone thinks that this Russia-Turkey deal will bring peace and security to Syria people, I think he is totally wrong. The propose of this war (it is not a civil war) is to destroy Syria and to keep Syria in an stone age area. Israel-USA-NATO will continue using terrorists (or direct attack) to get this goal. Syria has been pushed to the very edge of its existence by Israel-USA-NATO, either Syria wins this war and save its land, or it is totally destroyed or divided. Russia knew that the destruction of Syria would be the end of Russia possible economical and commercial influence in the middle east and the destruction of the naval base in Syria. That is why Russia (wisely) decided to help Syria, and without Russia help, Syria would not exist by this date. Russia has been doing a wonderful work against ISIS-Daesh-Nustra, but the relation shown with respect Israel and Turkey lacks of congruence with the declaration of keeping Syria territory save and uncut.

You didn’t answer a single question. Because you have no solutions. Only misplaced criticism of massive success. You’re a loser.

Stupid moron .what exactly you trying to tell us .make it more clear.or just shut up ? and piss offf

The Chinese haven’t yet come, so there is not a panda force in Syria.

Now Turkish soldiers be come jihadist. You out of your little mind.erdogan step side .let the panda ? force deal with jihadis .go go ?u can do it don’t forget nappies you shifting yourself

You laugh an make comments but guess what… TURKEY! Is still in Syria just doing what the freak they want…

But for how long. They are part of a “World Order” that is soon to break apart perhaps. All they have is Israel at moment who might be shy when the ground campaign starts. “Why not let Turkey handle most of it ?” they might ask. Reinforcements from Iran could also appear. My bet is on Syria to take it .. ahem.

This is the reality : TURKEY has invaded and now OCCUPIES all of Northern Syrian west of Euphrates and has expanded all the way down in HAMA governate to Morek for Chrissakes. Now they shell Ain al-Arab/Kobane with impunity, next move thru Manbij, next maybe Aleppo City ???

The Turks were bombed into cooperation as their pet terrorists were being decimated by air strikes.

hahahaha, they are just cannon fodder for Assad an Putin. Cheerio Kebab boy.

Why haven’t they been advancing?

Of course, Turkey is acting according to USA-Israel-NATO interests. What is Russia expecting from Turkey (despite their economical and commercial agreement) ?

I disagree, Turkey has mixed interests, it’s not as you think.

The Turks entering into a secession agreement with the US to replace the Kurds as the partition government partner has been the risk from the beginning. And I’m sure that that’s the US plan b now that the Turks have put a stop to the Kurdish Israelistan project. I’m also sure that the Syrian government is fully aware of these risks and also has counter measures prepared in the event of an agreement breach by the Turks. So it will be interesting to see how things play out.

Not so, M4 highway from SW Aleppo City down to Khan Sheikhoun remains in enemy hands.

“In the deal, it was also included that the M4 and M5 highways, are to be open by end of the year, linking respectively Latakia and Damascus to Aleppo.”

Come on, eff off, it is prayer time.

Ever since the invasion of Afrin Turkey has progressively re-inforced and deployed deeper and deeper across northern Syria and continues to do so, whether with regular TSK troops or proxies such as their Front of National Liberation (sic !). They do so with ease, knowing that no-one, not Russia, Iran, or Syria can stop them militarily without giving NATO the excuse it wants to bomb the SAA to oblivion. Sorry but this is the truth. As for the so-called Idlib “buffer zone” (which also stretches across extreme NE Ladhakia, N Hama, SW Aleppo) my map shows that both Russian and Iranian monitor ( passive !) OPs lie outside the perimeter, but the Turks have total control within and have built not OPs but permanent bases (northern sector) and Forward Operating Bases elsewhere. Turkish armored battlegroups freely transit the M4/5 highways right across Idlib at will.So much for de-escalation when the enemy can occupy Idlib without a shot being fired. 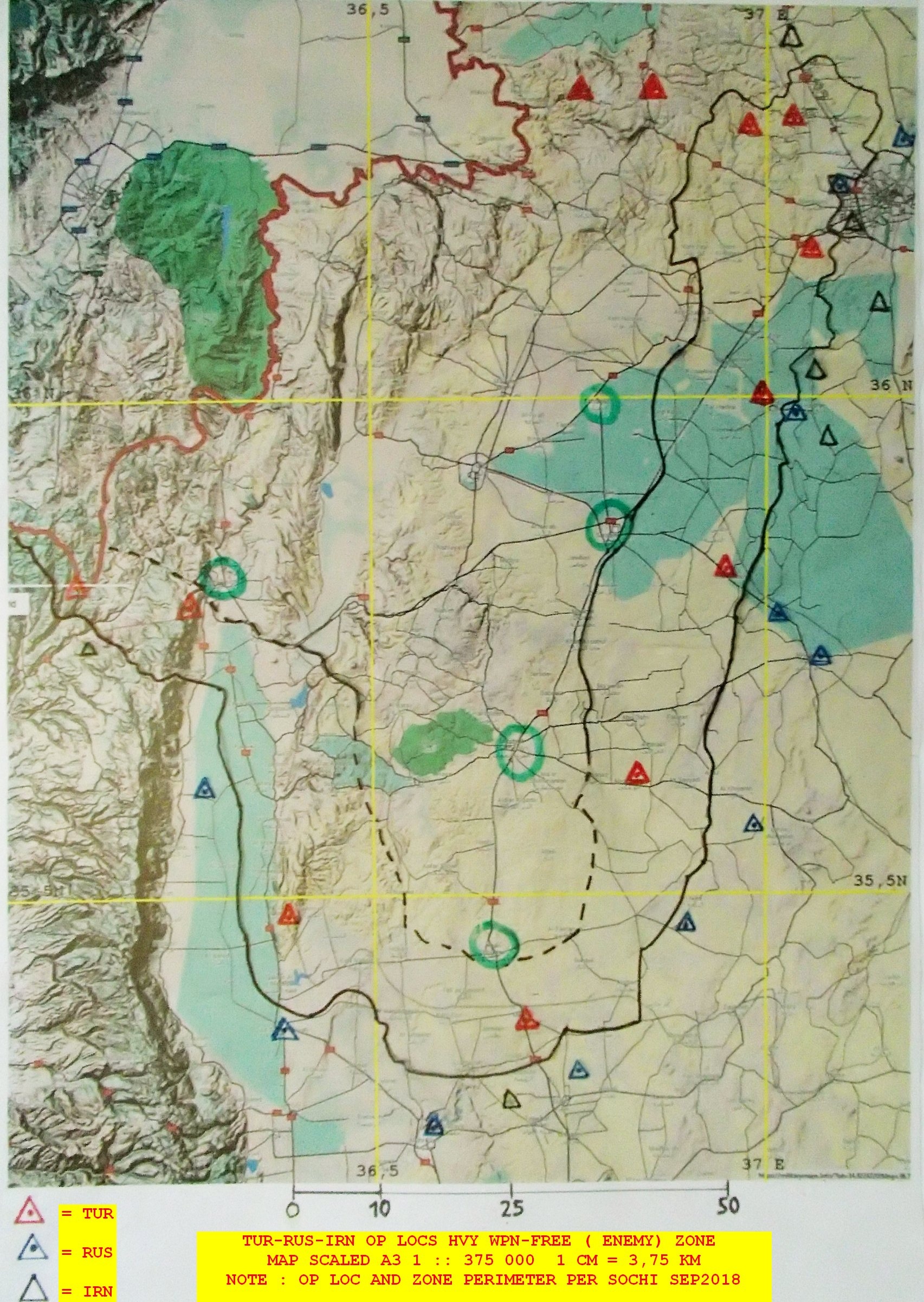 The Russian and Turkish press don’t agree with you:

“Control in this zone will be exercised by mobile patrol groups of Turkish troops and unites of Russian military police.”

“Turkish-Russian joint patrols in Idlib to begin in November

Meanwhile, joint patrols by Turkey and Russia in Idlib are set to begin in November to ensure the safety of civilians and compliance with the cease-fire in line with the Sochi deal. According to news reports, regular coordinated patrols in the 20-kilometer buffer zones that separate the opposition forces and Syrian regime still continues, while preparations for the joint patrols stepped up recently.

Following the establishment of a Joint Action Center that Turkey and Russia will build between the sixth and seventh checkpoints – the demilitarized corridor where joint patrols will begin to operate. The two countries will also dispatch more troops and equipment to the checkpoints if deemed necessary. The joint patrol will also be responsible for opening and maintaining the security of the M5 highway, a major trade route that connected the commercial hub of Aleppo to Damascus and on to the Jordanian border.”

Sorry, but you are a twat that talks utter crap.

If you dont follow the orders of Assad / Putin, you will be eliminated.

Indeed. In the Afrin area, Turkey started giving Turkish lessons to Syrian children, Turk Telekom is putting up posts and infrastructure, roads are built etc. Turkey has no intention of ever relinquishing their conquered territories again. It will probably be turned into something like “küçük Uighuristan” with some more or less tolerated Arab and Kurdish minorities. As for Idlib, they might keep it as dependent pseudo-state (autonomous region). We’ll see. Thanks for the clearly more informed comment (in counter-distinction with the usual blurb here). Salamat, Abuqahwatain ;-)

It looks to me from that video that they’re moving through town at a pretty good clip. Borderline being unsafe, especially considering the size of some of those vehicles and the number of pedestrians around. I’m assuming that that’s driven by security concerns. Because the convoy is vulnerable to attack.