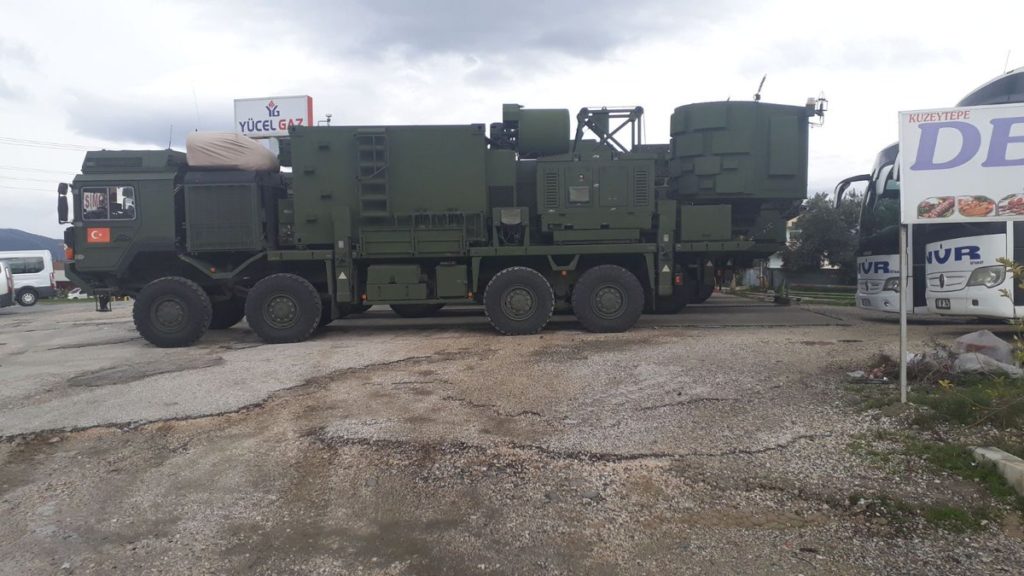 According to a photo circulating online, Turkish forces have deployed at least one Koral electronic warfare system near Syria’s Afrin controlled by Kurdish YPG and YPJ militias.

The system is used solely by the Turkish Armed Forces and is developed to jam and deceive hostile radars. Thus, Ankara is preparing for a possible military reaction of the Damascus government to the announced Turkish military operation against YPG/YPJ in Afrin.

Meanwhile, reports are appearing that pro-Turkish militant groups are deploying forces in the area of Azaz bordering YPG-held Afrin. These forces will allegdly particiapate in the Turkish operation.

This will be ugly Syria needs peace not more troops to wage wars.

I also do not understand fully why Afrin is so central when the Kurds are present on the whole eastern portion of the common border.

The difference being that US troops are in the east and not in the Afrin part. Turkey, for the moment, does not dare to attack their nominal allies within Nato.

US troops are also in Manjib and Turks have told to attack that part!

The Kurds have no allies within NATO. NATO has well defined borders of areas of operation, to prevent mission creep like this. Anything a NATO member does outside of these areas is their business and their business alone. This to prevent other NATO countries from being dragged into the colonial wars of the former European countries. And in this case the US. So there’s no point saying NATO this or NATO that. Unless your Kurds invade Turkey NATO is for all intents and purposes non-existent in this matter.

in any case, ISIS and nusra are more easily bombed to oblivion

Of course anti-Assad and anti-Russia elements will say the contrary, in fact it’s what they do all the time. Interested people should go back and look at the old comments of these folks and see how wrong they’ve always been.

Their intentions have been made clear with this.

We know who they are and we also know how wrong they have been,they wont go away so i just amuse myself by trolling their comments! They dont bite though so gets boring!.

Goℴgle paying every one 97 US dollars per/hr to complete esay jobs on my home computer .. Labor Some only few hours daily and enjoy greater time together with your own friends … You can also have this work…last Saturday I bought a brand new Mitsubishi Evo after I been earning $12352 this-past/month .it’s actually my favourite-job however you could now not forgive yourself if you don’t visit it.!vx953v:>>> http://GoogleHomeCashJobsHappyWorkFromHome/more/cash… ♥♥♥k♥♥e♥v♥o♥♥y♥♥y♥♥♥u♥♥h♥♥♥p♥♥♥b♥♥d♥♥♥i♥♥n♥x♥♥♥n♥x♥s♥♥q♥♥♥y♥i♥♥s♥y♥s♥f♥i:::::!re953d:lhuh

Paul the Kurds are Syrian citizens and Syria has an obligation to protect them. You are right it is a difficult decision unless Syria classifies the YPG as terrorists, not sure if they have, then they can look the other way.

It was a desperate try to ask Assad to help them. I think it is too late, Putin and Erdogan agreed previously. Kurds are on the wrong end of the dick again.

i have such feeling, that yanks will go in afrin to help for kurds. trump already told several weeks ago, the next target is idlib.

They have no interest there.

Surprise the US agreed and Turkey was warned accordingly by Russia so please check your facts before you type them.

Hide Behind
Reply to  John Mason

The Kurds are about as much a Syrian citizen as are their Eurocentric and others OUTSIDE OF SYRIA. Paymasters,; are funding and arming them to seperate from Syria, just as they originally did for Al’Q, ISIL and other well paid Syrian “Democracy” groups. The Kurds damn well know their paymasters goal is to remove dead or alive Assad and Syrian government holders, to be replaced by Syrian and Kurd ads kissers. No nation State wants citizens of such treacherous means within them. Honesty requires that truth of their aims be open, and this bull c r a p of trying to glorify them as some super altruistic group is risible, propaganda. It only aids Eurocentric/NATO overthrow of a sovereign nation.

They all came from Turkey. Most of the manpower of the SDF are Kurdish Turks who emigrated to Europe where they often receive the nationality from a European country (that’s why one of them calls himself accordingly). Though there are a few Kurds who or their parents received the Syrian nationality (earlier migration).

Its easy accept the syrian goverment and you have protection! Why should Assad lift a Finger Turks and Kurds battle it out, if the smoke is gone Assad moves in!

Most of the Kurds in Syria today are invaders and settlers from Turkey. The original Syrian Kurdish population who were given refuge by Hafez al-Assad and full Syrian citizenship back in the 60’s do not amount to more than 350,000 and they were given a land in Qamisli bordering Iraq by the Syrian government at the time. Today there are more than 1 million Kurds mostly from Turkey in accordance with the population swap agreement between Erdogan and Angela Merkel back in 2015 together with Iraqi Peshmarga.

Assad gave the current Kurds citizenship as recently as 2011. http://edition.cnn.com/2011/WORLD/meast/04/07/syria.kurdish.citizenship/index.html

Syrian Kurds in afrin have been somewhat loyal to Assad because , unlike Sunni Kurds in the northeast, the afrin Kurds include a significant number of alawite religion, just like the syrian oligarchy Assad comes from.

A Turkish invasion well likely include their mercenary terrorist allies who will ethnically cleanse (exterminate) these alawite Kurds. It won’t be pretty.

These Turks really wants to attack the U.S. occupied northern Syrian region, previously referred to as Rojava (that name is now abandoned) . But the us won’t allow Turkey to do that. Afrin is the only Kurdish target they can attack without conflict with America.

The kurds in Aleppo didnt fight to assist the saa,infact they sometimes fired AT them during the battles for the city,the kurds are treacherous and untrustworthy and make awful allies, id use them as cannon fodder to keep the turks/f.s.a busy then as the turks finaly over run the kurds just go in and pound the whole lot of em into fertilizer,kurds/turks/jihadis that would be worth writting about!

Something we all seem to not look at as these are 2 different types of Kurds one that has the US the other that has the Russians stationed there. My opinion is that this is an actual lesson to them to choose their friends wisely and all others in this conflict and any else the US would prefer to stay out. The warning is simple here to the allies as the Coalition have the control and Russia and Syrian allies should rethink there positions. This to me is more bluff and bluster in the end ,but it will be used to push for world to help push forward for the partition of Syria , they usually say by hook or crook the job will get done.

I know that Erdogan said once all the terrorists are eliminated, their armies will pull back so that the 3 millions plus Syrian refugees in Turkey can move back to Afrin ..! He said Turkey didn’t violates any international law and (he said) that UN says they have rights to defend their country’s interest.. ! Not sure why they are lots of speculations going on..!

If they keep those bussess waiting for a few days, they can take the body bags with their former passengers back again.

Sorry sadly that won’t happen as much as it’s wished for, this is a calculated move more by the US than the Turks as they are being well used by their hatred for PKK/YPG.

iMHO: Whenever I have studied Turkish history from Ottoman Empire till now, the title of a spaghetti western comes to mind, “The Good, The Bad, and the ugly”. As to its conduct towards humanity, and humane ideals, it has never been good, always bad, and for damned sure ugly. There seems at hand a vast difference in conduct of Turkey military compared to way Russian military conducts it’s war making in Syria. Where as Russia used very little of its own infantry on ground, acting as far more advisory role, and keeping in relative safety it’s pilots who bombed and strafe and hi tech remote warfare rolls. Leaving the far more precarious fighting and casualty losses for the Syrians to bear. Also the on ground tactic of always leaving the enemy an escape route, or bussingvthem out of areas, so Syrian military can gain land mass. Until today they now find CONCENTRATED enemy power in the areas they gave free passage to. And the Russians are going home. Turkey on other hand has vast numbers of its own infantry, armor and close in airpower ready to be unleashed, not leaving any escape routes to beleaguered enemy. Turks have for a few weeks been art and air pounding enemy positions all the while blocking any escape routes. It will be Turks not Syrians grunting out land takeover. This does not bode well for the sovereignty of Damascus and Syria.

Here is a scary thought about Russia they rotated forces out again and at the same time announced expansion of their bases, so don’t be surprised in the increase in planes , equipment and technical brigades and increased air defense coming to Syria.

Syrian government refused the YPG , as the YPG said they would host the Syrian flag on government buildings , but not allow SAA into Afrin . Refusing to accept the authority of the federal government , the Kurds create their “Kurdistan” .

You down here are all being deceived. This Hollywood drama is all staged to deceive Russia first of all to abondon Afrin. Once that is done, the Americans will come in pretending to seperate the two US/Zionist puppet opponents. One must read between the lines. Just two months ago the US top bras clearly stated that after Eastern Deir Ezzur they intend to concentrate on Aleppo and Idleb. This is the covert operation in full swing with both the Kurds and the Turkish regime in cohorts. The drama is simply acting for the media. “The end justifies the means.” Deception is one of the most preferred means by the US/Zio/Nazi tyranny.

I can’t wait to see their “army”, which is illegal according to international law, fighting a real army. LOL!