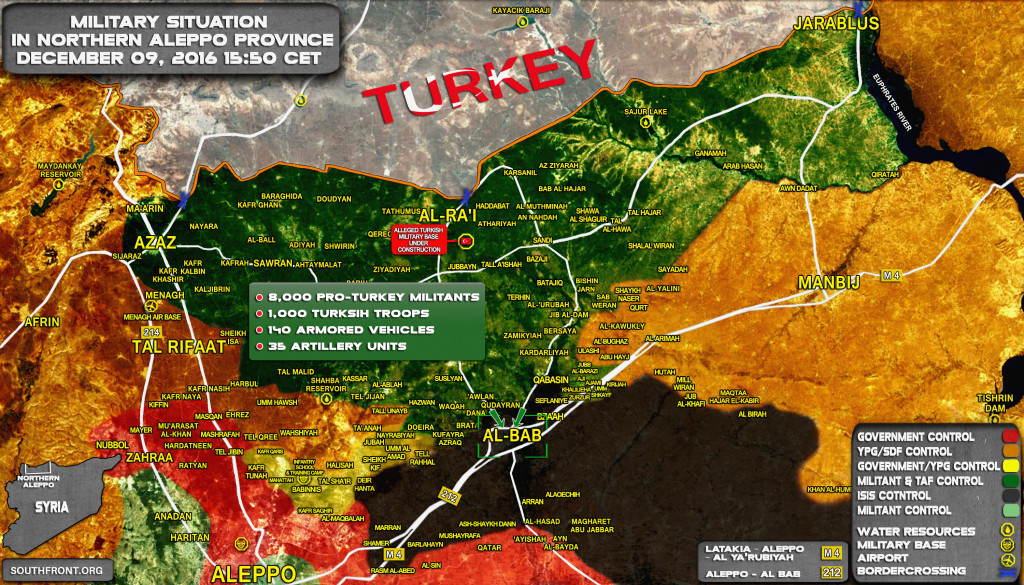 Since yesterday, Turkey-led forces have been continuing attemps to seize the key town of al-Bab from ISIS terrorist group in the Syrian province of Aleppo.

By now the Ankara regime and its jihadi puppets have not been able to achieve any gains in the area despite singificant forces deployed in the area.

According to local sources and official reports, Turkish forces involved in the al-Bab offensive consist of:

On December 8, Turkey reportedly deployed 300 elite troops from the 11th Command Brigade that were allegedly set to participate in the offensive on al-Bab.

Experts believe that ISIS has about 3,000 fighters and 15 units of heavy military equipment in the area of Al-Bab. However, ISIS terrorists  are much more motivated than their pro-Turkey counterparts.

The second day in a row pro-Turkey sources claim that the “opposition” is successfully advancing near al-Bab. Nonetheless, the situation on the ground clearly shows that they have not made significant gains and even not entered the town.

Turkish troops are in the area of al-Bab: 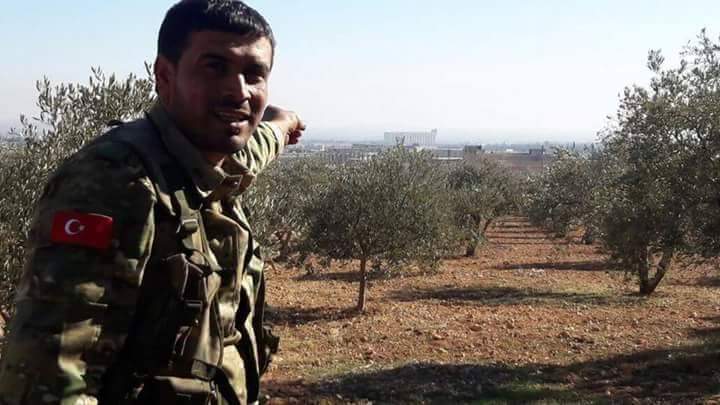 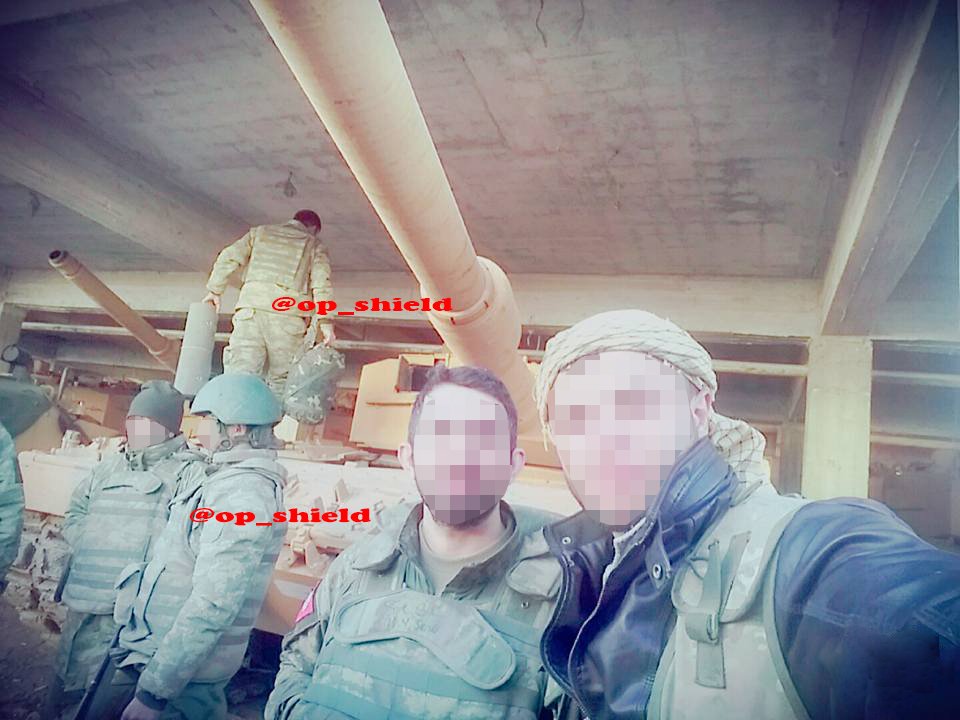 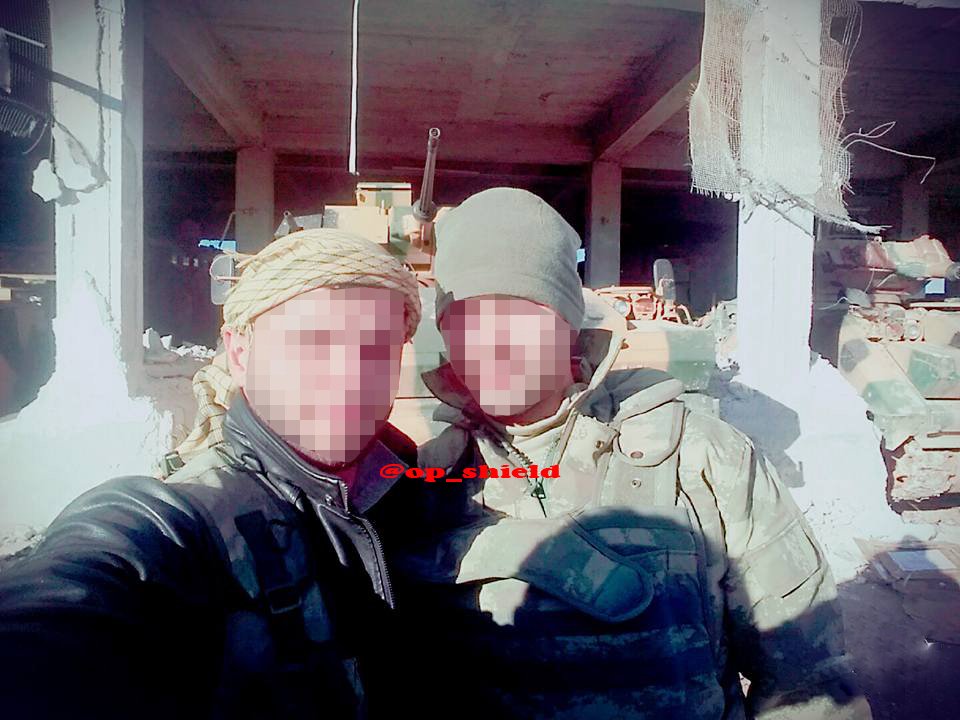 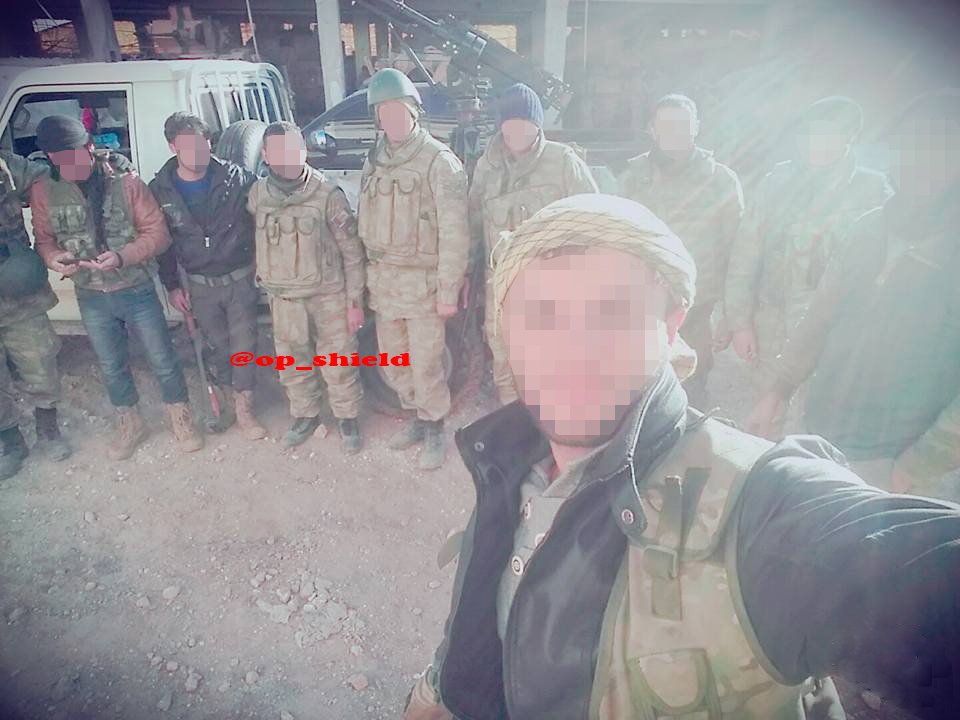 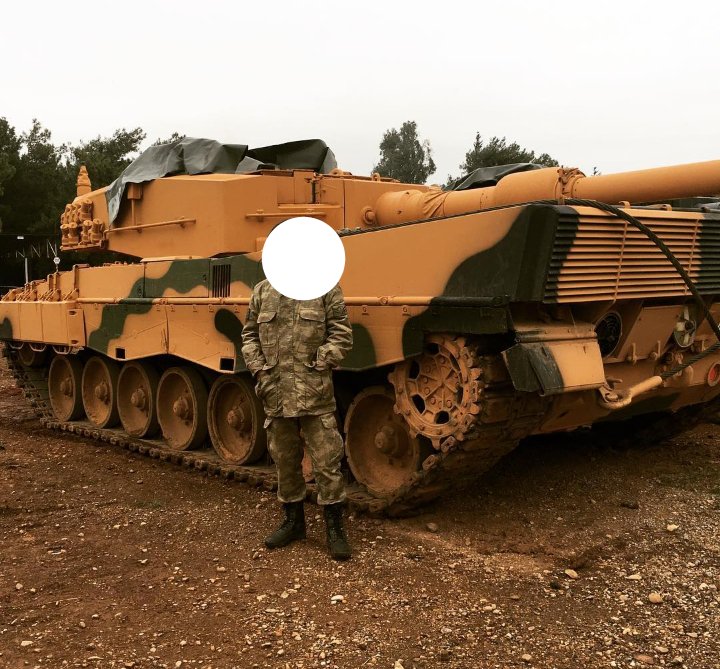 With faulty military moves like Erdogan makes , as in pushing too far south to Al Bab , he probably will not be around for long .

Wish Putin would put Granit and Kalibr on the Turk/FSA positions via real time sat/GPS. Just send them to Hell!

With so much fire-power, and being so close to Syria, its a miracle of Russian diplomacy that Turkey even being a Nato member, has gained so little ground in Syria over 4 years of conflict.

I’ve been a poster with Ziad and Syria Perspective since 2012. The Crimes of Turkey in view of the war and their sponsor of terror, chaos and theft. The outgoing lines of ISIS tanker trucks from Iraq and Syria to Turkey was years after the going In of over 70,000 Mercs from Takfiri Mosque and NATO collection countries into Turkey.

Turkey has murdered Syria and …God Willing….gets the Karma day for their pure Evil.

I understand Putin/Lavrov are facing down a Huge Snake in the form of Israel, Empire and Saudi filth…

It’s frustrating to see the Willing **…struggle…. against the Hissing Viper

And now Tu has 8000 militants, or is this propaganda. Caption for pix, pointing Turkish soldier is saying “This is where they are going to bury me”. So now turkey has brought leopard 1 tanks to the party, maybe they got tired of their other tanks blowing up!

Tanks on images are Leopard 2A4. Hopefully we get to see some combat footage of destruction.

Sometimes I get the big cats mixed up: panther, tiger, leopard. If there are 3000 ISUS still in area, it may be a very difficult struggle for FSA/TU forces. They usually took areas being vacated by ISUS. If turkey is smart they should just bombard ISUS for the next 2 months, unless Erdogan is in a rush to take Al Bab. The SAA should just kick back and watch from a distance. Maybe send in some drones for some good video and supply fresh popcorn for troops. They should not approach until ISUS is in full retreat.

It should be easily pentrated by it. :) The question is, can it be destroyed frontally with Konkurs (older, cheaper and more widely available missile)?

First report of Leopard 2A4 lost, but no video. ISUS seem to have many ATGM, given to “moderate” rebels, but went to the highest bidder on black market. What about the manpads? Does the “I” in CIA really stand for intelligence, or for instability?

How is that not an invasion? NATO member aggression.

Of course it is. NATO has been invading countries for decades, so this is “business as usual” for them.

after they get al bab, where do they go? manbij ofcourse; Aleppo is out of question anyways. so they will grind their teeth there, but if they start they will be attacked from both sides from Afrin and from Kobane cantons. anyone tho thinks that the “FSA” refuse in uniform can hold it’s own against kurds on two fronts is dreaming, and 1000 turkish troops stopping it… well, not a chance to hold kurds back on 2 fronts. this will take a few weeks, enough for SAA to stabilize (read: kill excess) ISIS down in Palmyra so they can issue an ultimatum for turkish withdrawal…. or else.

I can’t believe that I actually hope ISIS wins a battle. We’re living in strange times…

The YPG and SDF cannot allow this to happen. They should put the Raqqa offensive on hold capture Al Bab before the Turkish-backed Islamist terrorists can. If not, they’ll just have to fight the Islamists for it. The territorial continuity of Rojava absolutely vital, it would cut ISIS off from it’s biggest sponsor and ensure that troop/supply movements from Afrin to Quishmili could be conducted without underground movement through Turkey.

Double tongue Erdogan is busy with violation of sovereign State while Lavrov is busy with love affairs with Kerry.

For what it is worth, based on all the reports so I would put the total Turkish troops involved in Euphrates Shield at double that. The evidence points to two armoured/mechanised brigades, with 1 battalion of 41 Sabras, 3 battalions each with 41 M60A3s for 164 tanks, of 13 have been lost; 4 mechanised infantry battalions with 164 ACV-15s, and 24 Cobras with TOWs and mortars, of which 16 assorted AFVs lost; and 2 artillery battalions with 36 155mm SP, 1 of which was lost, and a total of a bit over 2000 troops, including 300 are a half-battalion of Commandos, minus likely personnel losses of 50-60 killed, and 100 wounded. I was of the understanding there was some 10,000 FSA. This merely adds in the other half-battalion of Commandos, which isn’t a significant force increase.