Turkish President Recep Tayyip Erdogan will speak with Russian president  Vladimir Putin on the phone over the situation in Syria’s Idlib in the next couple of days, a Turkish presidential spokesman, Ibrahim Kalin, said on August 21.

He further claimed that the closure or shifting of location of the 9th observation point in the Idlib zone is “out of question”. This is the point near Morekt, which was encircled by the Syrina Army earlier on the same day. Karim added Erdogan will also have a phone call with the U.S. President Donald Trump over the Turkish-US agreed safe zone in northeastern Syria at their earliest convenience on August 22 or August 23. He added that joint patrols of the U.S. and Turkish troops will begin soon east of the Euphrates river.

Turds will get smacked by both Russia and U.S….

Yeah, he definitely has box himself into a corner. Though neither US nor Russia has an interest to push him too far.
Turks knew beforehand Idlib would be liberated by SAA. Their real interests is in the Kurds. And having their HTS and TIP Jihadists killed will actually be a postive thing for Erdogan, even though they hide this and play defender of Idlib for their voters.
Since months the most loyal Turkish proxies have been clashing with HTS, and have been transported to Afrin and Al-Bab to prepare for the Kurds.
Thats what will decide this war, though it may take some time till we reach that phase.

“He added that joint patrols of the U.S. and Turkish troops will begin soon east of the Euphrates river.”
“the Turkish-US agreed safe zone in northeastern Syria at their earliest convenience on August 22 or August 23.”

The big winner of the turkish “Safe Zone”………..the SAA.
The kurds only option is a return to Syria.

safe zone for how long – unsafe zone from when the SAA have finished in Idlib and turn north followed by the Russian airforce, Kurds better strike a deal with Assad and then they can go back as tenants in the borderland. momentum is with the SAA and it won’t let go of the upper hand easily and will soon aim for the north east and idiot trump is locked in a straight jacket which is the election coming up in a few months time. and erdogan will prefer to deal with the kurds on his own and not in tandem with the unhinged states of A and its moronic president.

I think you are right. A whore is a whore, after all.

Turkeys are dumbass to begin with, they overplayed their terrorist hand in Syria and overestimated their deadbeat Americunt and Zionist masters. There is no way that they will annex any part of Syria or Iraq. They have small platoon sized cut off light units at the mercy of SAA. Syrians should kill the Turkey invaders.

Maybe by Russia ; Yankeestan will tickle the old whore and maybe kiss her too.

stupid is as stupid does
Reply to  Prince Teutonic

So…Erdogan says no withdrawal from that illegal observation post near Murek? And how, pray tell, will the Turks at that outpost get their supplies? AND what will they do when the SAA fully surrounds them directly at that outpost within the next few days???

Erdogan is either an idiot, or he is hoping that an “attack” on that illegal post will trigger a direct conflict between himself and Assad

I understand that food parcels will be given by the local populace to the much loved Turks.
Along with socks, condoms and LGBT magazines for the Turkish soldiers to entertain themselves with.

Smart tactic from Putin. By delivering the S400-System, he isolated Turkey from the Nato and the west. Additionally he allowed the SAA to resume its military operation. Erdogan got tricked. He can’t do a thing now.

Yep. I was thinking the same. Turkey will be left without any ally very soon. That will be the moment Erdo the dog does something stupid and Turkey will be no more.

Erdogan can do lot of things. Tokk S-400, and will annect north syria. :( And putin, the miniduce can not do anything. the russian economy needs the turkish stream.

Post in ENGLISH please, me no speaky gibberish, danke.

stupid is as stupid does
Reply to  xTheWarrior22

Well I wouldn’t go that far to say that… But one for sure can say that Turk maneuvering space is much smaller now than it used to be.

A Turkish observation post in a vast ocean of nothingness…observing shit….noice…Hey Turds remember that a misfired missile can accidentally hit your Observationists & their Post….oops!…some Turkish Collateral Damage…But hey who gives a shit…you cannot make an omelette without breaking the eggs…

They will die of hunger if they don’t leave the area.

I have to admit: them Turds are stubborn little feckers… let’s see how long they can stay there at Fort Erdogan…

SAA should push the surviving Jihadist rats towards Fort Erdogan, causing more competition for remaining food. Then Erdogan will be forced to ask the UN for emergency aid convoy. :D

I have heard that the ” syrians” have started picking off headchoppers close to the Turkish base at Morek. So good idea; ,push them to morek and then make them starve and then kill the headchoppers one by one by sniper fire. This will be psychological warfare as well to the starving sleepless shellshocked Turds.

OK. This will change nothing. The Turkish observers will just get to observe al-Queda in Idlib’s annihilation.

This double face Putin must block all Erdodigs calls.

It’s like having my leg in a bear trap and me saying that “I shall not move one step!” Lol.

The Turks haven’t prevented the clearing operation. So something acceptable can probably be worked out on decommissioning the observation posts. Or restructuring the Turkish presence in Syria as part of putting a regional force armed with nuclear weapons together to get the Israel problem solved.

As far as the joint patrols with the US in the NE. The Turks have had the Mossad infested US forces in Turkey for decades. And it hasn’t gone well for them. The better option is to get the US out of the NE and restore Syrian government administration there. 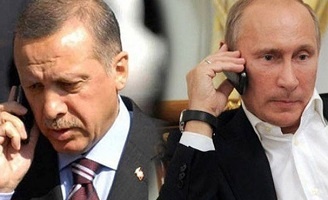 stupid is as stupid does
Reply to  Pave Way IV

Erdogan hitting the panic button, he really needs to alter his perspective and outlook to coincide with reality. Shafting Putin is a big mistake whereby shafting trump is no big deal.

What planet are you from! Turkey started a war with Syria for its boyfriend America. Why would Syria trust Turcos? Maybe we should let Syrian observatory in Turkish regime land and Turcos and Syrians can check which headchopper pigs go past?

As if there was a reason for them to stay now. They will silently move out of that area since it is liberated by SAA.

US abandoned Khe Sahn fire base in 1968. Even with total air superiority it was too expensive to maintain. Don’t shoot at the Ottoman Orcs. That’s what they want. Just make Morek into a liabilty.

stupid is as stupid does
Reply to  Felix D (TUPPERWARE PARTY)

No idiot wants to be shot including “Ottoman Orcs”.
ErDOGan wants many things and will try to get maximum out of any situation into his advantage, including out of getting Turk soldiers killed.
I agree that making “liability” out of Turks there is the best option for the moment.
That may change in the future also.

The Turkish admin have now renamed the 9th observation point to The Alamo. President Erdogan has sent his sincere thanks to all those servicemen soon to be lost.
There may well be some very ugly women trying to flee through the civilian corridor left open by Syrian forces.

maybe someone will remove it for them.

Israel might try, in order to blame the SAA and Russia.

Meanwhile, on the ground, without supply lines down the main highway a TAF withdrawal is inevitable.