On February 10th, the Turkish Ministry of Defense claimed that Turkish troops had struck 115 Syrian Arab Army targets and that 101 Syrian soldiers had died.

This was in response to the death of 5 Turkish soldiers and the injury of 5 more by shelling from the Syrian Arab Army.

The statement in its entirety is the following:

“Our soldiers, which were sent as reinforcements to the Idlib region, immediately responded within the framework of the rules of engagement and legitimate defense after the recent attacks by the [Syrian] Regime.

We have learned that the 115 regime targets identified in the region have been fired upon immediately, according to the initial information obtained from various sources, 101 Regime elements [soldiers] have been neutralized, 3 tanks and 2 artillery/mortar locations were destroyed, and 1 helicopter has been hit.

Shots continue within the scope of legitimate defense against the specified targets.

The blood of our martyred and injured soldiers has not been left on the ground; it will not be left.

Those who carried out this abusive attack will be asked to account for it and our right to legitimate defense against similar attacks will be used in the harshest way possible. The developments are being closely monitored and necessary measures are being undertaken.

We extend our condolences, patience to the troubled families, Turkish Armed Forces and our noble nation, and we will immediately transport the injured to their troubled families, to our cherished martyrs who lost their lives in this incident that overwhelmed us with deep pain and sadness.”

Turkey is not attempting to hide the fact that troops are being sent to actively support and assist the Al-Qaeda affiliated militants in the region. 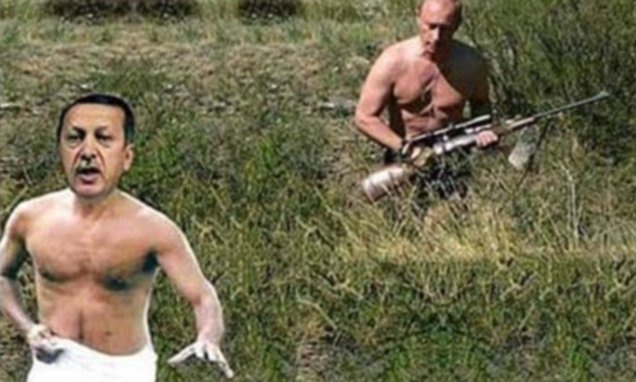 Erdogan is a illiterate coward with no military experience. The best Turkish officers are in jail.

if its true then SAA should have retaliated now. but this is just a propaganda to boost thier terriost child morale.

These are absolute lies, the Turkey arseholes have been cooked in Syria and they are taking a leaf out of their Jew masters book by telling total garbage fabrications. Who ever launched this airstrike did an excellent job as the number of roasted Turkey armor clearly shows. The Turkey peasants are as incompetent as their Saudi arsehole masters, moving armor in hilly area without recon or air cover is suicidal. Wait till the SAA and Hezbollah ATGM come into play soon. The Russian Kornet and its Iranian cousin the Dehalveih have a laser riding fire and forget range of over 8 kms and ideal for taking out targets in hilly terrain from higher ground.

Last week, 14 Russian soldiers died, 4 of them in the category of senior officers. Also, those who carried out this attack are Russian air force. Do not try to glorify yourself by insulting the Turks. There are 4 million refugees coming to Turkey in Idlib and all.

Just by getting hit and killed does not make a martyr.

This better be some cunning plan by the Russians because I am not amused. Blow the Turk fuckers out of Syria Russia.

People calm your tits. This is fake news by Turkey. Not a single video, nor photo has even been published by either jihadi media or pro government media outlets.

Exactly, 110 destroyed targets would be hard to hide if that was anything more than a bluff.

No it struck 10000 targets and killed 8 quadrillion SAA soldiers, and in 6 minutes they will be in Damascus with a victory parade.

I thought turkey was in charge of the idlib zoo, but now I see it’s the jihadists who are actively playing turkey. They are dragging the turks in a war that they don’t wanna fight.

if the SAA soldiers hurt it’s toe it’s on every media in 5 sec, this is total bs cuz nothing for hours no vid no pics no nothing.

When you are so picky about the numbers, then there is something wrong.

These guys go lost in the way to Idlib. Unlikely to be true.
There is a possibility that the SAA and Russians say that’s true for the face saving event, they are looking for.

Yeah, and I’m Maya Plisetskaya… “Victorious” announcements is what Turkey has really mastered to perfection.

You are stupid commie.

And you’re a TERRORIST.

It is pathetic on the part of Turkey to be hiding their failure behind fake news. He should be grateful to Syria for going along with the lie.

To those that say this is all propaganda: It surely is for the most part. But that Turkish troops dont strike the SAA back, is not believeable.
The casualty figures are likely 1:10 to the truth, just like it was with the attack on Kurdish troops.
But to doubt completely that the Turks strike back is pretty inconcieveable in this situation.
And the statement by SAA on al masdar (and last times) always was carefully worded, so it could be understood both ways: That the casualtiy figures are wrong, or that no attack has happend.
While the turks surely lie with those high figures, SAA like any military, US or Iran or any other, will avoid also to admit such attacks.
We are in info war. From all sides. Sadly.

Again: Instead of a downvote, acutally have the balls to make a counterargument. Without it, you only prove my point.

Yeah! And we believe ONLY 5 Turkish soldiers got killed….Remember the column of soldiers on top of this the other day?Just 5 died..True story https://southfront.org/in-photos-turkish-tanks-other-equipment-destroyed-by-syrian-army-strikes/

Someone should tell Erdy that ‘killing Syrians’ on twitter doesn’t count.

Does anyone know if this is fact or just Turkish propaganda? I am following several Syrian sources non of them has so far confirmed this information.

Erdogan propaganda it is his bullshit. Putin need to take him to rehabilitation camp.Merkel,Boris,Macroni and Trump have already run away from crazy fuck Erdogan. Syrian bloodshed is crying up into the throne of God and driving the gaot fucker crazy.

Putin will do noéthing. every bloody kopeyka for russian gas needs he and the oligarchs. They nedd money for buying and supporting of western football clubs.

Turkey most have a vast spy network in Syrian hospitals, ambulances and military aid posts to be able to come up with an exact to the minute fatality count.

Ok genius….and You think their fatality here was ONLY 5 SOLDIERS? Once you answer that i will believe anything you say…https://southfront.org/in-photos-turkish-tanks-other-equipment-destroyed-by-syrian-army-strikes/

Here can we see, how weak is Putin and his Russia.

Yes, Western countries should quickly begin reductions in military spending and use that money to improve the lives of their own people. With Russia clearly not a threat there is no longer any reason to delay. The rhetoric can return to reality based content as well, as there is no boogeyman out there beyond the Polish and Baltic frontiers. Thanks.

The western rhetoric is in accordance what i wrote. :)

Turkey its just desperately looking for a victory somewhere and are doing so with propaganda they need to justify all that equipment going into syria and really doing nothing with it. The turks want to look strong in the region and they’re failing at every front.they need to pack it up and stop the shyt show its hurting them more then anything. Russia will be weary of them and eu and usa dont like them and the whole region its starting to hate them. Erdogan its playing turkey as an empire in an empireless age just starting to look like a moron flexing stupidity.

I love how Erdogan claims right of self defence when he has illegally invaded the country. Anyway it is more likely for internal consumption rather than fact but risk of this situation escalating to uncontrolable levels is increasing by the day.
On another note I see the injured as almost doubled again in that Iranian attack that did litlle damage and hurt not one hair on anyones head.
https://www.yahoo.com/news/officials-more-100-u-troops-182431384.html