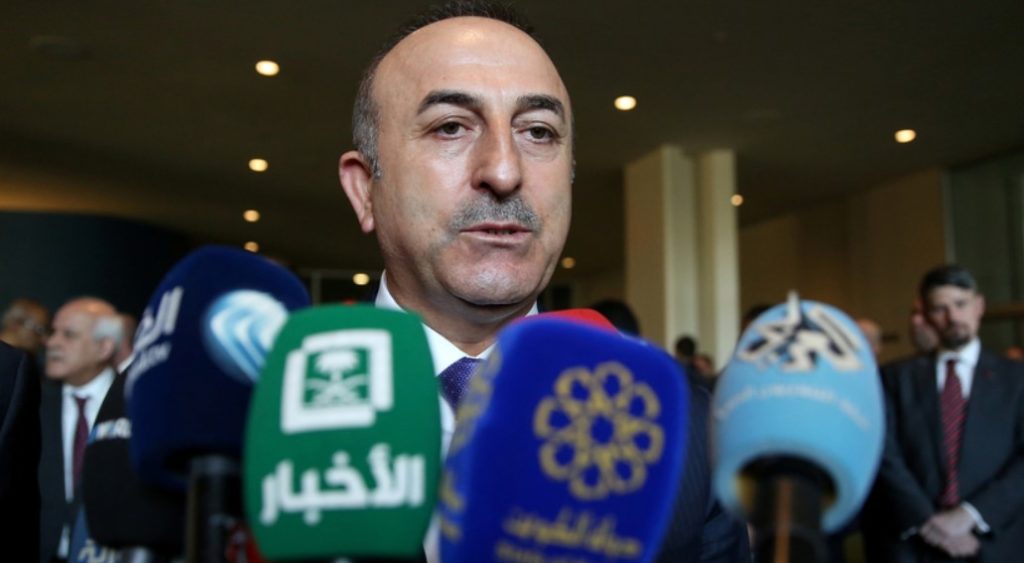 Turkey called on Russia and Iran to pressure the Syrian government to halt a military offensive against Hayat Tahrir al-Sham (formerly Jabhat al-Nusra, the Syrian branch of al-Qaeda) in the province of Idlib.

Turkish Foreign Minister Mevlut Cavusoglu said Russia and Iran must fulfill their “responsibilities” under a joint agreement reached with Turkey in 2017. He added that the ongoing advance would not be possible without support of Russia and Iran.

Under the agreement, the three countries announced a “de-escalation zone” in Idlib. Thus, Turkey, Iran, Russia became guarantors of the agremeent in the area.

“Iran and Russia need to carry out their responsibilities. If you are guarantors, which you are, stop the regime,” Cavusoglu told the state-run Anadolu news agency.

Unfortunately, Cavusoglu forgot to added that Hayat Tahrir al-Sham is a terrorist group and excluded from the ceasefire agrement. But, who cares, when Ankara sees the operation of the Syrian Army in the area as a threat to its expansionist interests in Syria.

Who cares what Turkey says? We’re still waiting for that long boasted about offensive against Afrin to take place. Obviously the Turks have a big appetite, but such poor teeth.

Why to stop offensive? What sooner all country will be in SAA hands, by sooner the Kurdish problem in north Syria will be banished…

if they dont wanna stop what turkey wanna do? turn the coming s-400 against russian jets?

These de conflicting zones never included al Qaeda. That’s the reason why these zones ware fake from the start.

We all know the real reasons for those zones. The SAA/Russia/Iran wanted those zones to be quiet so they could deal with ISIS first. It was only to buy time. Time to either deal with ISIS first, or for negotiators to encourage local insurgents to take a reconciliation offer. But we all knew shit would hit the fan again because Al Nusra was still considered fair game. And whenever Al Nusra gets hit, all the socalled ‘moderates’ would come screaming to its aid again and break the ceasefire themselves.

Meaning the so called “moderates are anything but moderate and actually not rebels but more terrorists dressed up by the West.

It appears that Turkey is playing a double game and all there talk about the US assisting the Kurds is just a ploy. If Turkey is serious about the Kurds they would have attacked them already and strategically the Turks are trying to block the Syrian advance as is the US, collusion between Turkey/US to partition Syria.

Methinks the Turks would LIKE to deal with the Kurds, except that A: they enjoy US protection and B: the Turkish army is up shit creek thanks to the constant purges. You remove that many experienced commanders on all levels of the armed forces and it WILL influence performance. We saw that during Operation Euphrates Shield. And that’s excluding C: that the Turks seemed to have done fuck all to upgrade their armor, which makes them highly vulnerable to ATGM’s, which the Kurds also have, thanks to the US.

On top of your comment, the turkish airforce has been purged even more than their army. They can operate, but not in a sustained manner over a larger area.

Purging your army if you want to go to war shortly thereafter is usually not a smart thing to do. But then again its usually the sign of a dictator that he’d rather have a loyal army then a competent army.

It is certainly better to have a less competent but loyal and patriotic, then to have a effective vassal army controlled by NATO. A vassal army must always be competent to serve foreign masters. With time, a loyal army improves and becomes competent.

Actually loyal armies do not improve as competent commanders meet with unfortunate ‘accidents’ or even more blatantly the secret police. Loyal commanders are more busy with promoting people who are ideologically correct then competent. And often competent people are hated by them because they remind them of their own inadequacies. This is also a bureaucratic principle that applies to all organizations.

To a dictator foreign enemies are less scary then his own military. Foreign enemies can try to topple him, but that takes time. His own military can topple him within hours. And nothing is more dangerous to a dictator then a competent commander, for A: he can get the idea that he might do a better job, B: do the toppling and C: is usually popular enough to sway enough of the army to do so.

It’s only when things are really dire that a dictator would tolerate competent commanders, as in when the survival of his regime is at stake. Like in during a war when an enemy is about to invade, or has already invaded.

So Syrian army expanding into Syrian territory is now a threat to turkey?

Lol at guarantors they are full active fighting the rebels. They themselves are a fighting force in this battle.

I was thrown and shocked by how much Russia invested in this war. Honestly speaking they have no dog fight here let alone investing so much man power and economy. The entire Russian economy could go completely wasted here.

More Mountains of BullShit from you saying the SAA is sidelined is hypocrisy at it’s best as the SAA has become a better equipped and organized army because of Russia and Iran while developing their fighting style and missiles , while rebuilding an aging fleet of old aircraft. They are far from being down and out as they continually fund their own reconstruction projects. Russia spending it’s military budget on upgrading it’s Army for years and this is where you can really field test equipment not some field with no enemy. Russia, China and Iran have all limited investment in the region and them expanding it is very nominal in comparison to the daily investment of the US into Israel and Saudi Arabia.

There is a very good reason Russia is there. If Syria falls to western interests, Saudi Arabia and a few other Arab countries will build a massive gas and oil pipeline direct from Saudi Arabia to Europe. Both Turkey and Qatar were in on the western powers deal but have now switched sides to Russia, [for now at least]. If the Saudi’s were able to get their product direct to Europe, Russia would lose a lot of it’s economic revenue, and also it’s political influence over a lot of European countries. Can you imagine Russia losing half it’s revenue to a US allied country like Saudi Arabia, which is also fast becoming not only a good friend to Israel, but in the future a possible ally. No the only alternative is to let a friendly partner like Iran, and an ally like Syria build one direct to Europe and do exactly the same thing as the Saudi’s want to. If you want reasons as to why the Russians prefer this option here are a few. The Saudi’s are already engaged in a price war with Russia over oil and gas using the means of over production and suppressed pricing, this new pipeline would make things even worse for Russia. The loss of revenue by either a Iranian or Saudi pipeline will be devastating to the Russian economy, but at least with the Iranian Syrian and Turkish deal, Russia will get some sort of a cut that will help offset any revenue loss from oil and gas sales. Cooperation between the friendly parties would also see a possible rise in prices compared to a decrease in prices as would be expected between a Russian Saudi trade war. Russia will also increase arms sales to all these countries involved on it’s side, further offsetting any loss in revenue. Also just as importantly, Russia will be able to retain political influence in Europe using it’s new partners influence by proxy, allowing it to still be able to influence some European countries. The MSM as well as the alternate media, are just tools used by the real players that control our world, and they’re trying very hard to confuse the rest of us about why this war in Syria is really taking place, but this simpleton does know and the above reasons are why I believe it is.

Erdogan is playing two way show to make Turkey oil and gas stream possible.This started when Erdogan realized that the Russians are going to win this war and restored legitimate government.

Russians are using Turkey at Astana meetings to show the world how foolish their are.

I wonder why the Turks don’t stop their offensives that has spanned so many years against the PKK too then? Their hypocrisy stinks to the high heavens. Terrorism and separatism shouldn’t happen in Turkey, but it should happen in Syria?

Its just for show! Turkey is glad these militants are being wiped out, so they don’t have to deal with them later. If Turkey really cared they would launch airstrikes and a big offensive etc. to help them. Turkey realized at the last moment its own survival was threatened in Israeli ISIS plans and changed sides to save itself, so Turkey doesn’t need or want the militants any more and certainly does not want them to come to Turkey, better they die in Syria

I still have to make an opinion about Turkey’s involvement:

They were instrumental in the start of the war by jihadism against the Syrian People.

They attacked a Russian bomber at the moment when Russian intervention was destroying the Turkish little oil business with ISIS, even trying to start a war between NATO and Russia.

Yet at some point after these events they changed course and it’s undeniable.

My idea is that during meetings between Erdogan and Putin, the Turkish have been made aware of some information they were lacking about possible zio/US plans for the region – something in which Turkish efforts were exploited to remove Assad but then “many thanks and FO”.

Then two other things happened, the resigning of PM Davitoglu and the “coup”.

I hypothesize that the PM could actually be a US/Israeli agent and that Erdogan purged that influence in both civilian and military power places.

I never believed that the coup was a Fetullah Gulen’s thing. The day before the coup, Kerry and Nuland were visiting Putin in Moscow – I remember Putin almost being unable to look at them in disgust – and that there were talks about Turkey. If Gulen was responsible, it wasn’t the “mind” behind the events, he was most likely conveying orders and acting as a link in a chain where both the PM and the US were present.

Turkey will never feel remorse for their actions in Syria, actions which have killed over 400,000 Syrians.