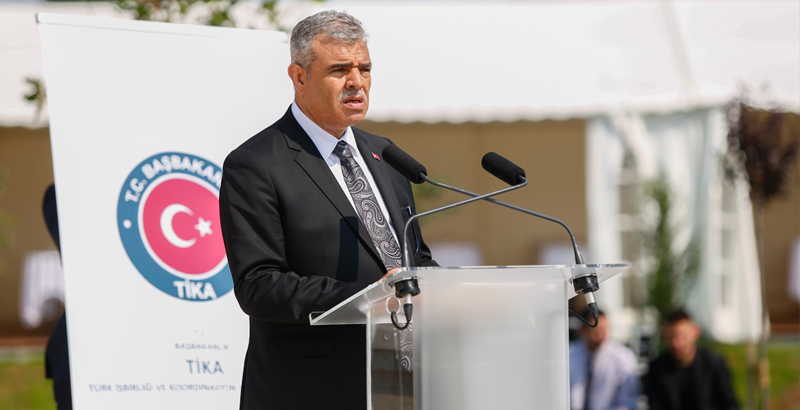 Turkish EU Affairs Minister Omer Celik has called for the usage of military force against Syrian President Bashar al-Assad’s regime, the Anadolu news agency reported on Wednesday. According to Celik, only this would allow preventing of Assad’s “atrocities against civilians.”

The Turkish Minister did not clarify whether Ankara would be ready to provide troops for any military actions against the Syrian government, which is supported by Russia and Iran.

“Assad must end his policy of killing through the use of chemical or standard weapons,” Celik added. “Otherwise, the political solution will not be put in practice.”

Also on Wednesday, Turkish Deputy Prime Minister Veysi Kaynak once again accused the Syrian government of a chemical attack in Idlib province and said that it was not the first such attack, carried out by the Assad’s “regime”.

“The decision of the United Nations to start an investigation is not enough,” Kaynak said. “It must be brought directly to the Hague International Criminal Court.”

“Former US President [Barack] Obama had said the chemical attacks were their redline. After that our President Recep Tayyip Erdogan said ‘is killing people with conventional weapons not as important as killing them with chemical weapons?’” he added.

“We cannot ignore the fact that death is death after a bomb kills a patient in a hospital, a child in a school or a woman at a market place,” Kaynak said, accusing the international community of being “insensitive” to the Assad’s crimes.

According to the Turkish Deputy Prime Minister, the US intervention in Syria is “hopeful,” while support, provided by Moscow and Tehran to Assad’s “regime”, is “upsetting”.

“There is a killer who is able to use chemical weapons against his citizens, against the vulnerable people, and he [Assad] is your ally, and you are protecting him,” he said.

Meanwhile, a representative of the Office of Civil Defense in the Syrian province of Daraa, Mohammed al-Zuz, told Anadolu that the Assad’s government continues to use barrel bombs, justifying it by the US interference in the situation in Syria.

According to al-Zuz, on April 12, the Syrian Air Force dropped eight barrel bombs on Deraa El-Beled settlement, controlled by the ‘moderate’ opposition in Daraa province. He noted that nobody was killed or wounded, but many houses were destroyed in the town.

According to the news agency, al-Zuz said that since the beginning of April, attacks of the Syrian Air Force and the Russian Aerospace Forces on Daraa have intensified. He claimed that since early April, Syrian helicopters have dropped 78 barrel bombs on the province’s territory.

The administrative center of Daraa province is divided into two parts: Deraa Mahata (the new city) in the north and Deraa Beled (the old city) in the south. The Syrian government forces control the most part of Deraa Mahata.

In conclusion, Anadolu reminded that on April 10, Washington said that the US President Donald Trump’s administration would take retaliatory measures after each usage of chemical weapons or barrel bombs by the Assad’s regime. Apparently, news agency’s journalists remembered statements of White House spokesman Sean Spicer, who mistakenly equated barrel bombs with chemical weapons. In their propaganda fervor, the Turks forgot to clarify the facts.

As we see, it is extremely difficult for a dishonest corrupt war criminal quisling to take the moral and ethical high ground when it is up to its nose in the morass and swamp effluent keeps getting into its mouth. Gurgle, gurgle, gurgle.

All this is surreal . Historians of the future will struggle to make any sense of the tragedy the US and her demonic allies have inflicted upon the secular Arab world.

The Turks are despaired. My wish for next Putin move : arm PKK. Turkey for Christmas everybody !

I am sympathetic with the kurds. They should get their homeland using a portion of Turkey, Iran, Irak and Syria.

Goes to show how Turkey is only here to sucker punch Russia for historical grievances and push for their neo-Ottoman empire, regardless of the costs.

One step at a time, Turkey in Syria with the US is only temporary. Russia has already instigated counter moves through the UN who are now forced to act and uphold its’ Charter just to have some sort of credibility or even operate as a functioning organization. Turkey and the US will be given their marching orders in due time, till then, let them go at each other’s throats.

Turkey may get what they seek but may not be their wish, Syria may just throw you out of Syria. Who are they going to complain to then? Can’t see the EU or US paying them any attention, Israel may but that would cause a civil uprising in Turkey. With all of that covert and double talk actions from Erdogan he may just have out BS himself. Erdogan may just be the patsy who gets blamed for supplying CW to the terrorists.

Turkey is armed with NATO hardware. NATO countries can refuse to sell Erdogan spare parts and munitions when he runs out.

Turkey is guilty of the atrocities in Syria. They sent intelligence officer Osmon Ozon to Idlib a fortnight before 4th April to organize this dreadful crime with al-Nusra commander Amir Abou al-Baraa al-Sheshani. Will the Turks cooperate in bringing these two to justice?

The world would be a better place without Assad and Erdogan in it.

Turkey is more dangerous than the US in Syria. Erdogan being a two-faced opportunist and war-monger is right on the border and you he may very well order a full-scale attack. His moves are over-shadowed by the US strike but Syria and Russia must not let their guards down. The danger is coming from the Turkish-Syrian border.