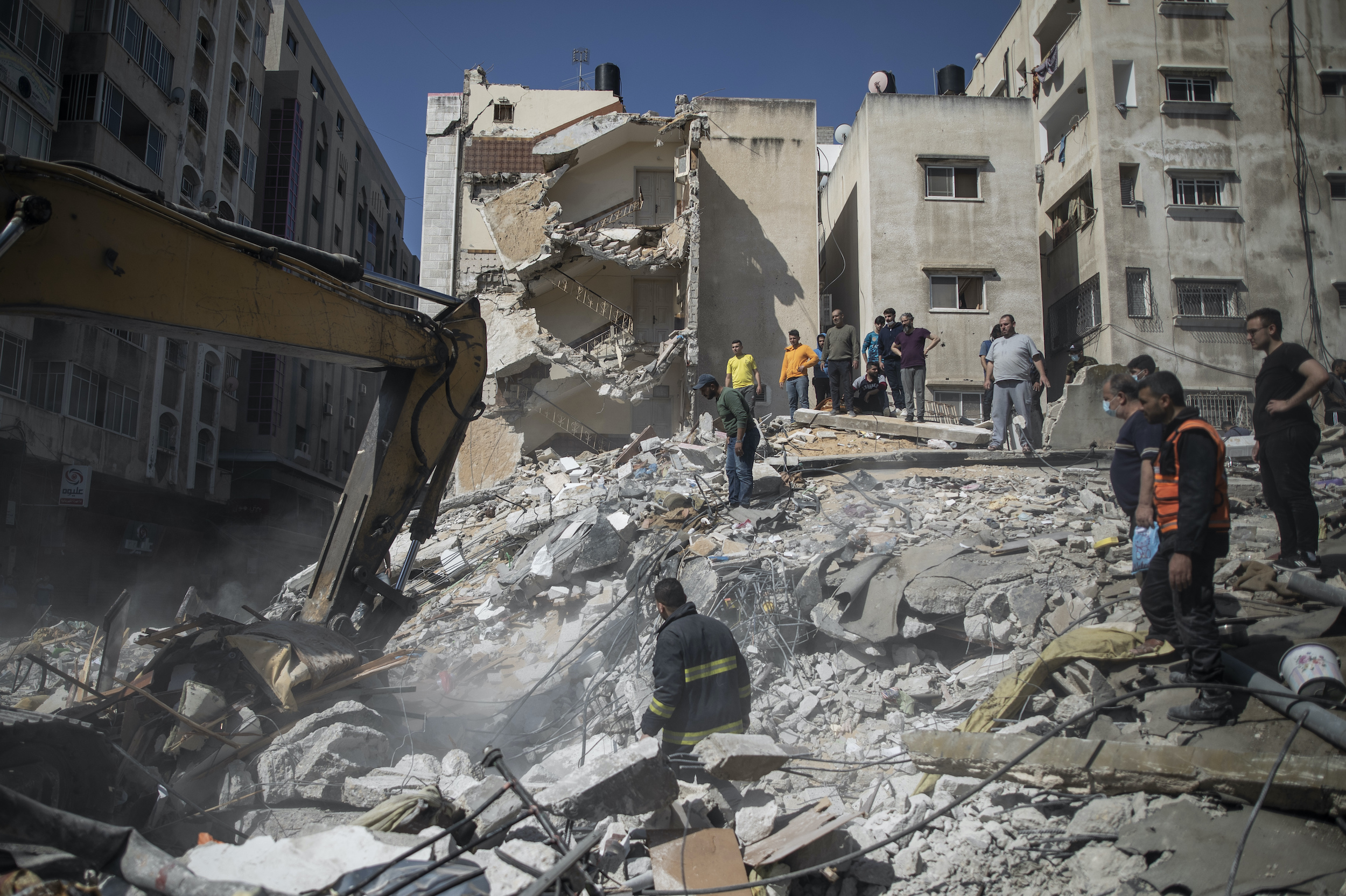 “These efforts should also include physical protection through forming an international protection force with military and financial contributions of willing countries,” Turkey’s Foreign Minister Mevlut Cavusoglu told the virtual meeting of the 57-member Islamic bloc, adding such a mechanism is in line with a 2018 UN General Assembly resolution.

It is time to show unity and determination for Palestine, and Turkey is ready to take any necessary step, he said.

Claiming that efforts to normalize ties with Israel have emboldened it, he added:

“We should stand for justice and humanity. There should be no other considerations. This is time to show our unity and decisiveness. The ummah (Muslim community) expects our leadership and courage, and Turkey is ready to take whatever action is necessary.”

Cavusoglu told the OIC that Israel should be held accountable for war crimes and that the International Criminal Court could play a role.

The OIC meeting comes as Israel continues its relentless bombing of Gaza where it has killed some 181 people, including 52 children, while attacking Palestinians in occupied West Bank.

The Israeli bombardment began on May 10th, after Hamas fired rockets in response to bloody Israeli aggression at the flashpoint Al Aqsa Mosque compound in occupied Jerusalem, as well as a brutal crackdown on protests against the planned Israeli expulsion of Palestinians from their homes in the Sheikh Jarrah neighbourhood in annexed East Jerusalem.

It is likely that Turkey’s claims are entirely empty, as it has been pushing out supportive rhetoric for the past week, but hasn’t undertaken any action whatsoever.

It is currently hoping that another Muslim country will take the lead and undertake some sort of action so that it could provide some limited support. It is likely Ankara’s wish to not give up on improving relations with a potential conditional ally in the face of Israel, but also wants to appear supportive in the Palestinians’ plight.

"Many innocent people have died, amongst them there are also children. This is terrible! Unacceptable!"

Saudi Arabia and many other Middle East countries are doing largely the same, condemining Israel’s actions, commenting, expressing support of the Palestinians and not undertaking a single actual, conrete step.

So when are you gonna be sending your troops to help do this torki? Or is this just talk?

Its a puzzle konglomerate. Most people living in the Region should blame each other as well as very much themself for creating agressions among each other.

As Outsider having åaid by UN for small corners of it as well as my parents did I have repeated myself: As long as You killeach other, You dont come here.

Turks by the way has cut off the electricity to lebanon. As I recall it there is not peid for it as well as it cover(ed) 20%.

who are you. You the Troll . The moon is floating in the river before sun goes down in outgoing tide. only real jens makes sense.

Noo I AM real jenss holm. you kan’t be real jens you make too much sence. You wont float in the river, you will sink becouse you Are too fat :)

not another jens or are your the other jens . I am getting so confused I might just end up like jens.

I am Jens. You areJens. WE are all Jens now. We will assimilate the rest. We will all become one flesh. Comply or die!

Resistance is futile. You will be assimilated.

How dare you steal my account handle – I am the real Jens! But I have seen the light – and now realize I was completely in wrong in all of my past trolling! My new view is – Viva Russia and Syria!

Aha! I found the real jens holm, the one who actually capitalises his name properly!

Why you stealing Jens Holm’s ID ?

the real one is the one replying to Ams . My guess 4

Jens is very careless and leaves it laying around, is only natural it gets picked up…

You think that you don’t have to ever quit

Better get it off

There’ll be no one left when we set it off

We ain’t gonna take it no more

Stupid as shit, boring and he even has danish å in åaid. That’s the real jens ^

Well spotted, I never noticed that but I see the other jens have been deleted. No more fun. poor jens the idiot.

May I have your attention, please? May I have your attention, please? Will the real Slim Shady please stand up? I repeat, will the real Slim Shady please stand up? We’re gonna have a problem here Ya’ll act like you never seen a white person before Jaws all on the floor like Pam, like Tommy just burst in the door And started whoopin’ her ass worse than before They first were divorced, throwin’ her over furniture (Ahh) It’s the return of the, oh wait, no way, you’re kidding He didn’t just say what I think he did, did he And Dr. Dre said, nothing you idiots Dr. Dre’s dead, he’s locked in my basement (Haha) Feminist women love Eminem Chicka-chicka-chicka Slim Shady, I’m sick of him Look at him, walkin’ around, grabbin’ his you-know-what

You have to ask? Erdog and MBS sleep with the Israelis. They have for a very long time, this is not a recent development. How many weapons are bought and sold between them? How much dirty work for Israel do they do? Where is another Muslim country that kills more Muslims than these two do? They are going to help save Palestine? Not on your life. Erdog is for himself, the same as MBS. Greed and power, the same goals as Zionism, is their desire. They convince only the mentally impaired that they care a whit about Palestine. For them, Palestine is an albatross around their neck, only to be used as a false object to gather support. Both should receive the same award as Il Duce.

Turkey should instead help the starving Somali muslims

I am Proud Hindu so why you use when you paki living in ceylon tell lies many times fool.

Shouldn’t you be busy tossing your covid infected relatives into the Ganga, Proud Dindu?

Dead ones or live ones . I find dead ones are better , they don’t mooove so much.

This is ETHNIC CLEANSING. The Israelis will not honor the RIGHT to return of the NATIVE PEOPLES of Palestine . The Israelis have engaged in Ethnic Cleansing since the illegitimate “state” was artificially created by the SCORNED United Nations in 1948. GOD did not create “israel” the United Nations DID. From Deir Yassin and hundreds of other small villages the Native People were driven by Terror and Murder. If the Bible is not the LITERAL WORD OF GOD, then the Jewish “right” to Palestine is just a MYTH also. The (former) President of the United States has admitted that the Bible is NOT LITERAL. “Bible probably not true”, says George Bush US President George W Bush has said that the Bible is “probably not” literally true and that a belief that God created the world is compatible with the theory of evolution. Last Updated: 12:15AM GMT 09 Dec 2008 “I think you can have both,” Mr Bush, who leaves office January 20, told ABC television, adding “You’re getting me way out of my lane here. I’m just a simple president.” But “evolution is an interesting subject. I happen to believe that evolution doesn’t fully explain the mystery of life,” said the president, an outspoken Christian who often invokes God in his speeches. “I think that God created the Earth, created the world; I think the creation of the world is so mysterious it requires something as large as an almighty and I don’t think it’s incompatible with the scientific proof that there is evolution,” he told ABC television. Asked whether the Bible was literally true, Mr Bush replied: “Probably not. No, I’m not a literalist, but I think you can learn a lot from it.”

Turkey buys weapons systems from Israel – M-60 pattern tanks and drone component software and hardware – this is just Turkish rhetoric and posing, to try and court the ME Arab Muslim audience.

The Objective
Reply to  GoldStandard

GoldStandard
Reply to  The Objective

The Palestinians dont need a protection unit. What they need is their own nation, under their own control. This proposal is a trap.

It is PR and you know it if Turkey cared they would sanction Zion first before crying in the UN which was made for Europeans Zion.