According to the Turkish Interior Minister, Ankara could send 15,000 refugees a month to Europe and “blow its mind.” 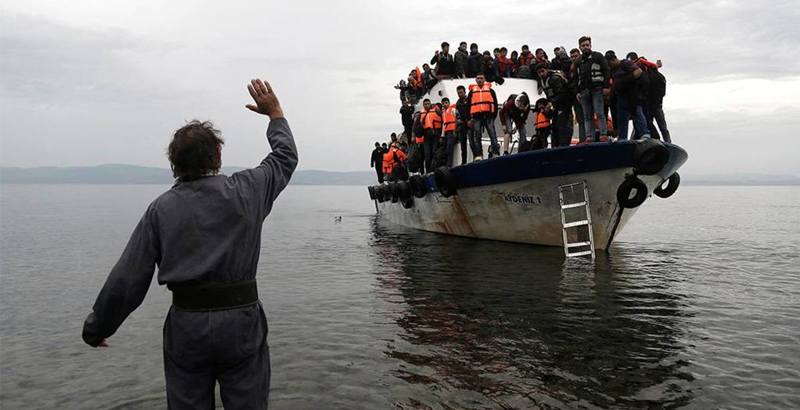 Turkey has threatened to open the way for 15,000 refugees to the EU monthly, if the block continues its unfriendly policy towards Ankara, the Hurriyet newspaper reported on Thursday, citing Turkish Interior Minister Süleyman Soylu.

“I’m telling you, Europe, do you have that courage? If you want, we could open the way for 15,000 refugees that we don’t send each month and blow your mind,” the newspaper quoted his words.

The minister noted that Europe cannot ‘play its games’ in the region, ignoring Turkey. Soylu also accused Europe of failing to help Turkey to join the EU and not providing support in the Ankara’s fight against terrorism.

The Minister also said that Germany and the Netherlands were involved in anti-government protests in Turkey in 2013, Kurdish demonstrations in October 2014 and the failed coup attempt on the night of July 16 in Turkey.

He also urged Germany and the Netherlands not to interfere in Turkey’s internal affairs, in particular, when it comes to a referendum on expansion of the president’s powers.

“This is our internal issue. What do you care? Why are you getting involved in it? Did you accept Turkey into the European Union? Did you provide support to Turkey in its fight against terrorism?” Soylu said. “There are games being played against Turkey in order to prevent it from becoming strong in the future,” he added.

The minister went on to state that Turkey is in its strongest period and that “some people can’t handle it.”

Earlier, the Turkish authorities already hinted at a possibility of rupture of the agreement on regulation of migration flows to the EU, which was concluded with Brussels on March 18, 2016.

On March 15, Turkish Minister for EU Affairs Omer Celik said that Ankara no longer sees any reasons to adhere to the agreement with the EU on migration, and the agreements should be revised. The statement was made amid a sharp aggravation of relations between Turkey and a number of European countries.

On March 11, the Dutch authorities did not allow a Turkish plane with the country’s Foreign Minister Mevlut Cavusoglu onboard to land in Rotterdam. The minister planned to deliver a speech at a public rally in Rotterdam and tell his compatriots about the constitutional amendments, put to the referendum, which should be held in Turkey on April 16.

They also banned a speech of Turkish Family Affairs Minister, Fatma Betul Sayan Kaya, who came by car from Germany and wanted to meet with the Turkish community.

You’re telling EU countries not to interfere in Turkey’s political affairs, but then you lose it when they do the same by preventing a Turkish politician from influencing politics on Dutch soil, you get pissed and threaten to further help the cultural destruction of Europe via your migrant invaders, and yet you still think you should join the EUROPEAN Union? I will never understand the Turkish government, pieces of shit.

Egypt is invading and genociding the indigenous people groups and tribes of Europe. This is all out war. The war machine of Turkey must be destroyed, and it’s millions of invaders shoved back into their own ancestral home lands of Turkey. https://www.youtube.com/watch?v=c7y2LRcf4kc

and the EU should send bach each turkish workers. and stop inevetitions in turkey and buying of turkish products. we will see, who stands longer.

The first deal was already blackmail and blackmail never stops. We should cancel the deal and return all illegal migrants to Turkey. Shoot them out of the water if they keep trying.

If Kurds & Co were clever, thay should say: Hey, we have a safezone here and take 1 to 2 million refugees from Turkey at once.

That would be a real coup and be heavy supported by EU, UN and legitimize them much better as something not that little.

Kurds divided in 4 countries east of the – by a railroads – and now a fence and being mobbet often since 1925 of all of them.

I am bit surprise German make nice blue movies.Why don’t their unleash their actors and gays to take on this Turkish from the anus both men and women,and give them nice pork meat at brothels.Foresure Erdogan will never send those goat flickers again.