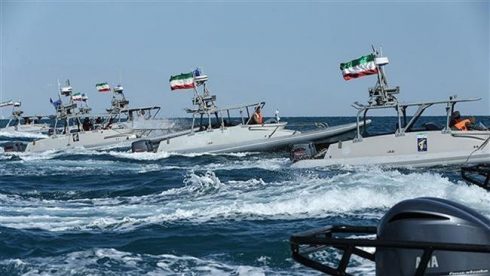 Amid the ongoing deployment of military reinforcement on its border with Azerbaijan, Iran did not forget about the propaganda tool while threatening the potential enemy.

On October 4, a number of epic video of the Iran’s Islamic Revolution Guards Corps (IRGC) were widely spread on social media.

One of the videos demonstrates about 4,000 IRGC speed boats that were deployed in the port of Astara on the Caspian Sea on the border with Azerbaijan. Such a reinforcement could play a strategic role in case of a direct confrontation. These IRGC boats could quickly reach Azerbaijani oil facilities in the Caspian Sea.

Meanwhile, Iran continues to deploy tank and artillery units on the border with the Nakhichevan Autonomous Republic of Azerbaijan. 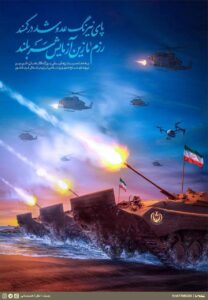 Tehran has recently finished the wide-ranging military exercise that was named The Khyber Conquerors and was launched on October 1 near the border with Azerbaijan.

More footage of the exercise was recently released.

Some new video from #Iran‘s Conquerors of Kheybar military exercise near the border with #Azerbaijan. pic.twitter.com/eha0RSSQBr

The exercises followed shortly after another set of drills in the same region about which very few details have been released.

Tehran is deeply concerned of the support to Baku provided by its partners like Turkey and Israel.

The events that are taking place in the northwest of Iran & in some neighboring countries should be resolved based on the concept of banning the presence of any foreign military. Everyone should realize that if you dig a hole for your brothers, you’ll be the 1st to fall into it. pic.twitter.com/p3LpXvuMpU

The supply of Israeli strike drones likely caused such a harsh reaction of the Azerbaijani neighbor. The deployment of Israeli weapons in Azerbaijan would allow Tel Aviv to threaten more Iranian facilities, including the nuclear ones. 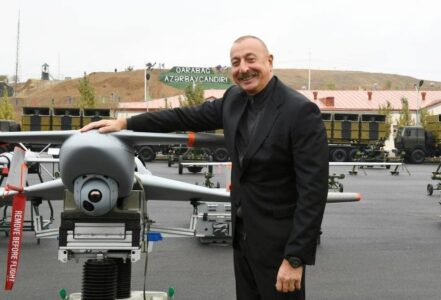 During the recent war in Nagorno-Karabakh, Israeli Harop loitering munitions were actively used to target Russian-made Armenian air defense systems. This is an important experience, taking into account that Iran also has Russian ADS in service. 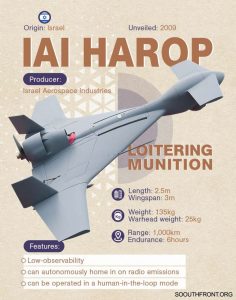 Azerbaijani Foreign Ministry spokesperson Leyla Abdullayeva rejected the accusations of the presence of foreign forces, like Israeli intelligence officers, on the border with Iran. According to her, these statements are as baseless as the rumors about Syrian mercenaries’ participation in the last Karabakh war.

However, the active role of Turkish-backed militants and Israeli specialist in the war was proved by numerous reports.

The talks will take place following the reports of the Islamic Republic readiness to launch military operations against Azerbaijan in case of attack on the Armenian Syunik region. 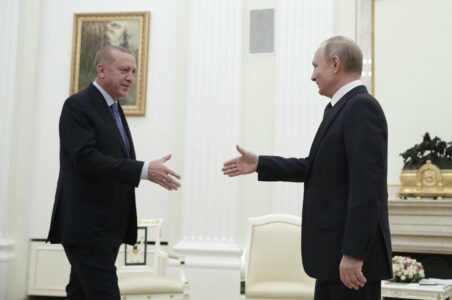 The military tensions on the Iran-Azerbajani border followed the meeting of the Turkish President Recep Tayyip Erdogan with his Russian counterpart Vladimir Putin. The situation in the Southern Caucasus was likely one of the top priority topics for discussion of the two leaders. However, the results of the meeting were not revealed and were likely disappointing.

Thus, following the Iranian show of force, Azerbaijan and Turkey will hold a military exercise in Azerbaijan near the border with Iran. According to the Turkish Defence Ministry, the joint exercises will take place on 5-8 October. Titled “Unshakable Brotherhood,” they will be conducted in order to “develop friendship, cooperation and coordination between the Turkish and Azerbaijani Land Forces.”

In addition to the joint Azerbaijani-Turkish exercises in Nakhichevan, joint military exercises with Georgian, Azerbaijani and Turkish servicemen “Eternity-2021” were launched in Georgia on October 4.

Azerbaijan has 95% Shias, all of them hate their Sunni puppet government. Those Shias will fight for Iran before they fight for their government.

Glory to God. The people of Bahrain have withstood a terrible oppression over decades, from wahabi’s and their demonic masters US/uk/zionist entity. They remain steadfast, defiant and resistant, diligently marching on al Quds day and associating their struggle for freedom with Palestine. Victory to the resistance, victory to Palestine, Bahrain and Yemen. Imam Mahdi (AS), he is here and will right these wrongs and bring justice for all.

Ok dude, you can do whatever you want but not to threaten Europe or Christianity. We helped you in the Cold War and now you are threatening us.

I mean Europe not EU

That’s why Aliyez has opened the door to Turkey and Israel’s militaries, cause he can’t trust the native Azeris. He’d have a mass mutiny of his armed forces in a matter of minutes.

turk/azeri clowns are suicidal. Iran backed by Russia and China would destroy the azeris in any conflict regardless of turkish support.

Iran alone would wipe out the Azeris without even breaking a sweat. The regime running Azerbaijan probably doesn’t even have much popular support. I mean what Shia country allows Israel to use its bases??? You can’t be more of a whore and traitor than Aliyez… except for his Turkish gumbah, Merdobegone.

Turkey would probably be destroyed as well

Turkey and Iran will unite. This is inevitable.

Why Assyrian semite? why? yous a semite no?

Putin the poodle
Reply to  block

Look at his pic…….petting that IDF Harop drone. Modr jende look like a moghal guppu from Uzbekistan……lol. These guys are not native to the caucasus. Theys asiatic mongols.

You too would pet your own attack drown after enough beers. Do not judge until you are sufficiently high/drunk.

Sure some are complete idiots, par for the course.

I’d smack a turkish guppu in da street if I saw him. These modr jende oglu toglu goplu belong in the east torkestan of xinjiang. Not in the Caucasus trying to intermingle with us no? I just wanna throw em aliive in a death pit and then bulldoze it with dirt…….Fuck them.

One would be wise to remember than every single Harop drone that wandered in Iranian airspace during the conflict in Karabakh ended up being pulverized out of the sky in mere seconds. WE *already* have the data on what would most probably happen in such a war between the neighbors. Armenian crews were ill-trained and they operated legacy S-300 systems with older PESA surveillance radar and without shorter-ranged support defenses. Too many people believe a single air-defense apparatus is akin to a invincible, magically impenetrable, all-out 360° plasma shield against any threat. That is why layered defense exists.

Blue In Green
Reply to  Gryzor

Long time no see my friend :)

As always, you’ve accurately explained the reality on the ground.

Iran has the experienced AD-crews and systems needed to tackle the threat coming from these loitering drones en-masse. More over, this conflict will be resolutely decided by Iranian-will alone. It really depends on just how merciless or gracious Iran wants to be when/if the shooting starts.

Azerbaijan doesn’t have a large military, nor do they have adequate ABM defenses needed to mitigate the damage IRGC’s Aerospace BM fleet will cause (which can range from destructive to catastrophic).

Last edited 8 months ago by Blue In Green
7
Reply

Putin has what he wanted…troops in Karabaj and business with Turkey…but Iran cannot allow Israeli& Syrian Sunni terrorists backed by Turkey close to is borders and the closure of the road which link Iran-Armenia.

So what Iranian Shia terrorist doing near israile border?

you just blew your cover didn’t you?…..lol….yous aint even a guppu but a middle eastern shyster. Ain’t you?……I name you a semitic dalit from today onwards…….lol

for once i hope iran wins and demolishes the evil azerbaijani and turk dogs, iran can do the job that russia was too weak to do

Zionists are trying to ignite a war between Iran and Turky. Then turky go cry to NATO and as israhell is member of NATO, WW3 will start to save the crumbling dollar. Be carefull Iran.