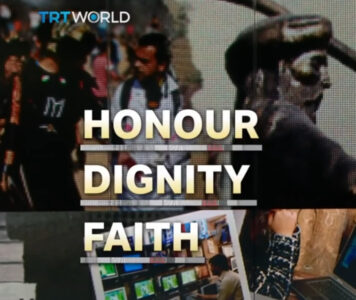 The times they are a changin’. Iranian leaders may not be Bob Dylan fans, but his words are likely to resonate as they contemplate their next steps in Iraq, Iraqi Kurdistan, Lebanon, and Azerbaijan.

The same is true for Turkish President Recep Tayyip Erdogan. The president’s shine as a fierce defender of Muslim causes, except for when there is an economic price tag attached as is the case of China’s brutal crackdown on Turkic Muslims, has been dented by allegations of lax defences against money laundering and economic mismanagement.

The setbacks come at a time that Mr. Erdogan’s popularity is diving in opinion polls.

Turkey this weekend expelled the ambassadors of the US, Canada, France, Finland, Denmark, Germany, Netherlands, New Zealand, Norway, and Sweden for calling for the release of philanthropist and civil rights activist Osman Kavala in line with a European Court of Human Rights decision.

Neither Turkey nor Iran can afford the setbacks that often are the result of hubris. Both have bigger geopolitical, diplomatic, and economic fish to fry and are competing with Saudi Arabia and the UAE as well as Indonesia’s Nahdlatul Ulama for religious soft power, if not leadership of the Muslim world.

That competition takes on added significance in a world in which Middle Eastern rivals seek to manage rather than resolve their differences by focusing on economics and trade and soft, rather than hard power and proxy battles.

In one recent incident Hidayat Nur Wahid, deputy speaker of the Indonesian parliament, opposed naming a street in Jakarta after Mustafa Kemal Ataturk, the general-turned-statemen who carved modern Turkey out of the ruins of the Ottoman empire. Mr. Wahid suggested that it would be more appropriate to commemorate Ottoman sultans Mehmet the Conqueror or Suleiman the Magnificent or 14th-century Islamic scholar, Sufi mystic, and poet Jalaludin Rumi.

Mr. Wahid is a leader of the Muslim Brotherhood-linked Prosperous Justice Party (PKS) and a board member of the Saudi-run Muslim World League, one of the kingdom’s main promoters of religious soft power.

More importantly, Turkey’s integrity as a country that forcefully combats funding of political violence and money laundering has been called into question by the Financial Action Task Force (FATF), an international watchdog, and a potential court case in the United States that could further tarnish Mr. Erdogan’s image.

A US appeals court ruled on Friday that state-owned Turkish lender Halkbank can be prosecuted over accusations it helped Iran evade American sanctions.

Prosecutors have accused Halkbank of converting oil revenue into gold and then cash to benefit Iranian interests and documenting fake food shipments to justify transfers of oil proceeds. They also said Halkbank helped Iran secretly transfer US$20 billion of restricted funds, with at least $1 billion laundered through the US financial system.

Halkbank has pleaded not guilty and argued that it is immune from prosecution under the federal Foreign Sovereign Immunities Act because it was “synonymous” with Turkey, which has immunity under that law. The case has complicated US-Turkish relations, with Mr.  Erdogan backing Halkbank’s innocence in a 2018 memo to then US President Donald Trump.

FATF placed Turkey on its grey list last week. It joins countries like Pakistan, Syria, South Sudan, and Yemen that have failed to comply with the group’s standards. The International Monetary Fund (IMF) warned earlier this year that greylisting would affect a country’s ability to borrow on international markets,  and cost it an equivalent of up to 3 per cent of gross domestic product as well as a drop in foreign direct investment.

Mr. Erdogan’s management of the economy has been troubled by the recent firing of three central bank policymakers, a bigger-than-expected interest rate cut that sent the Turkish lira tumbling, soaring prices, and an annual inflation rate that last month ran just shy of 20 per cent. Mr. Erdogan has regularly blamed high-interest rates for inflation.

A public opinion survey concluded in May that 56.9% of respondents would not vote for Mr. Erdogan and that the president would lose in a run-off against two of his rivals, Ankara Mayor Mansur Yavas and his Istanbul counterpart Ekrem Imamoglu.

In further bad news for the president, polling company Metropoll said its September survey showed that 69 per cent of respondents saw secularism as a necessity while 85.1 per cent objected to religion being used in election campaigning.

In Iran’s case, a combination of factors is changing the dynamics of Iran’s relations with some of its allied Arab militias, calling into question the domestic positioning of some of those militias, fueling concern in Tehran that its detractors are encircling it, and putting a dent in the way Iran would like to project itself.

A just-published report by the Combatting Terrorism Center at the US Military Academy West Point concluded that Iran’s Islamic Revolutionary Guards Corps (IRGC) faced “growing difficulties in controlling local militant cells. Hardline anti-US militias struggle with the contending needs to de-escalate US-Iran tensions, meet the demands of their base for anti-US operations, and simultaneously evolve non-kinetic political and social wings.”

Iranian de-escalation of tensions with the United States is a function of efforts to revive the defunct 2015 international agreement to curb Iran’s nuclear program and talks aimed at improving relations with Saudi Arabia even if they have yet to produce concrete results.

In addition, like in Lebanon, Iranian soft power in Iraq has been challenged by growing Iraqi public opposition to sectarianism and Iranian-backed Shiite militias that are at best only nominally controlled by the state.

Even worse, militias, including Hezbollah, the Arab world’s foremost Iranian-supported armed group, have been identified with corrupt elites in Lebanon and Iraq. Many in Lebanon oppose Hezbollah as part of an elite that has allowed the Lebanese state to collapse to protect its vested interests.

Hezbollah did little to counter those perceptions when the group’s leader, Hassan Nasrallah, threatened Lebanese Christians after fighting erupted this month between the militia and the Lebanese Forces, a Maronite party, along the Green Line that separated Christian East and Muslim West Beirut during the 1975-1990 civil war.

The two groups battled each other for hours as Hezbollah staged a demonstration to pressure the government to stymie an investigation into last year’s devastating explosion in the port of Beirut. Hezbollah fears that the inquiry could lay bare pursuit of the group’s interests at the expense of public safety.

“The biggest threat for the Christian presence in Lebanon is the Lebanese Forces party and its head,” Mr. Nasrallah warned, fuelling fears of a return to sectarian violence.

It’s a warning that puts a blot on Iran’s assertion that its Islam respects minority rights, witness the reserved seats in the country’s parliament for religious minorities. These include Jews, Armenians, Assyrians and Zoroastrians.

Similarly, an alliance of Iranian-backed Shiite militias emerged as the biggest loser in this month’s Iraqi elections. The Fateh (Conquest) Alliance, previously the second-largest bloc in parliament, saw its number of seats drop from 48 to 17.

One bright light from Iran’s perspective is the fact that an attempt in September by activists in the United States to engineer support for Iraqi recognition of Israel backfired.

Iran last month targeted facilities in northern Iraq operated by Iranian opposition Kurdish groups. Teheran believes they are part of a tightening US-Israeli noose around the Islamic republic that involves proxies and covert operations on its Iraqi and Azerbaijani borders.

Efforts to reduce tension with Azerbaijan have failed. An end to a war of words that duelling military manoeuvres on both sides of the border proved short-lived. Azerbaijani President Ilham Aliyev, emboldened by Israeli and Turkish support in last year’s war against Armenia, appeared unwilling to dial down the rhetoric.

With a revival of the nuclear program in doubt, Iran fears that Azerbaijan could become a staging pad for US and Israeli covert operations. Those doubts were reinforced by calls for US backing of Azerbaijan by scholars in conservative Washington think tanks, including the Hudson Institute and the Heritage Foundation.

Eldar Mamedov, a political adviser for the social-democrats in the Foreign Affairs Committee of the European Parliament, warned that “the US government should resist calls from hawks to get embroiled in a conflict where it has no vital interest at stake, and much less on behalf of a regime that is so antithetical to US values and interests.”

He noted that Mr. Aliyev has forced major US NGOs to leave Azerbaijan, has trampled on human and political rights, and been anything but tolerant of the country’s Armenian heritage.

Complete Nonsense! Why did south front even find a taste in publishing this unrealistic article in the first place…. If you read carefully the part of Lebanon, hezbollah warning is codes? The message is for the Israel/US and all the local players that wanted to bid for the slave masters… Period!

Dr James M Dorsey is part of editorial board of the SF,

This guy James Dorsey has zero understanding of Muslim culture and countries. His agenda is to push his false understanding and propaganda to Sourh Front readers. So sad Southfront has been taken over.

I was totally correct. US influence is waning. Turkey and Iran will come closer. Russia and Europe will also come closer.