The Russian Aerospace Forces have used the new Kh-101 cruise missiles against terrorists in Syria for the first time. 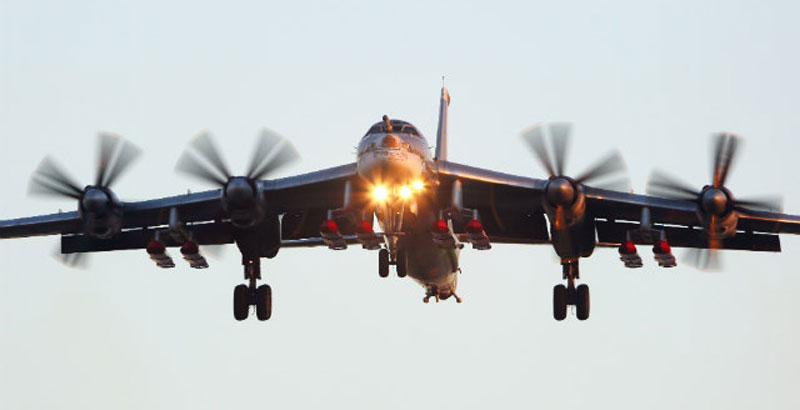 The Russian Defense Ministry published a video of missile strikes of the Tu-95MS strategic bombers on positions of Syrian terrorists. This is the first official evidence of usage of the new Kh-101 cruise missiles. Before that, only the Tu-160 heavy strategic bombers used these weapons.

The Kh-101 missile is one and half meters longer than standard weapons of the Tu-95, the Kh-55 cruise missile, and does not fit in its weapons bay. For this reason, the bomber, showed on the video, were carrying two missiles on its external suspension (we can see this on the 14th second of the video). In all, judging by the number of carrying piers, the upgraded aircraft can carry up to eight Kh-101 (six Kh-55 can be charged into a cylindrical launching device).

The Kh-101 is a high-precision long-range cruise missile of a new generation. The missile is made solely from Russian components; it is practically totally stealthy for radio detection and ranging. An advanced guidance system does not allow the missile to deviate from its target by more than five meters during launches on any range, including on the maximum one. The maximum range of the Kh-101 is 5,000 kilometers.

The Kh-101 has an inertial navigation system, like ballistic missiles. Knowing a point of launch, the electronics calculates a current position, using longitudinal and lateral accelerations. Received data are corrected by the optoelectronic system, which compares landscape beneath the missile with a standard for comparison. On approaching a target, the Kh-101 turns on its seeker, whose operating principle is classified as secret.

In contrast to missiles of the previous generation, the Kh-101 can be retargeted on another facility after its launch. Control points of a way and targets, which the missile can hit, are programmed. Then, during a performance of a combat mission, the target can be changed.

The missile is also presented in a nuclear variant – the Kh-102, which is equipped with a 250-kiloton warhead. The Tu-160 is capable of carrying 12 such missiles in its two inner bays.

In the fall of 2015, the Tu-160s struck positions of terrorists in Syria with the new ammunition three times. Combat launches of the Kh-101 from the board of the Tu-95 have been performed for the first time.

The mission Syria delaying,and primarily responsible for that is Sergey Lavrov with his suspicious ceasefires .The Russia delay to liberate Aleppo cost money and Russian officers losses.Russia with Lavrov s policy get into trap It will be a new Afghanistan if continues to delay.Russia has to decide to make a blitzkrieg to liberate Syria.Until now Putin’s -Lavrov policy is a disaster.Turkey and Kurds have occupied North Syria.American air-force operates free in Syria.Aleppo and many other parts of Syria under control of terrorist.Iran -Assad don’t trust Lavrov .

But Lavrovs delay was only meant to prove the USA NATO lies of wanting time to separate terrorists from FSA,which the bigoted and lying American coalition fronted by John Kerry have thus far not been able to do,either because they cannot or they are just buying time for their mercenaries to regroup and restrategise.

To speak of arrogance or boasting or insult or anything like that is rather sentimentality. The feeling and the moral justification is for the powerless. The strong have no need of such. Strong well they know that they will get what they want: “… .. and we both know that in human relationships the right reckoned when there is equal power for charging, and that when this does not happen, the strong do what enables them their strength and the weak accept what is required to accept. ” (Fifth book, paragraph 89).Thucydides the greatest Athenian historian …https://en.wikipedia.org/wiki/Thucydides

You sound just like the American neocons…might makes right. Maybe they don’t want the rest of the world to look at them as no different than the US. Russia is proving the neocons to be liars and murderers. You apparently think the western approach is right. The Europeans are already resisting US pressure, even NATO is demoralized at their propaganda failures. This is only good for Russia in the future.

If you were in charge, the SAA and allies would suffer massive casualties. I’m glad you’re not in charge.

Why Iranians throw out Russians from air bases?Simply because not trust them.How to trust someone who not respect his own soldiers.Turks shot down SU-24 ,and murdered two Russians officers and masochist Putin instant to retaliation will shell to them S-400.Do you really trust such a opportunist person?For to satisfy their masters Russian oligarchy he will sell his own mother to the devil.

Russia wasnt kicked off. They made an agreement to arrive, stage, depart at agreed upon times. When the departure time came, the Russians left. Protocol. Nothing more. Theyre always welcome back.

One RuAF officer was murdered by Turko-otto-nazi’s. the other was rescued.

The S400 is Air Defense. its not Artillery so therefore you cant “shell” anyone with it.

Youre confusing your American Oligarchy with the Russian leadership. Lets clarify: Obombya is part of the Oligarchy, like many of the left and the hawks of the right. Each of these swamp-monsters will work for their common interest. not anyone else. Putin and lavrov are doing good. The cease fires prove the Russians are patient and eilling to grind down the morale of the Beheaders whilst winning hearts and minds.

Simply. Brilliant. The beheaders Have NO escapd unless they are allowed -ALLOWED to leave when thd SAA and its allies SAY SO.

☝ Utterly humiliating for the beheaders to be tempted by the “Evil Regime” thry oppose. To accept the mercy of their sworn enemy over paradise is flagrantly insulting to their ‘Sunni Superiority’ and to those who support them.

i find it quite *Delectable* to see these supposed ? ‘warriors’ ?(spineless jellyfish) Be loaded onto buses and travel past the guns that were firing on them before, and could just obliterate thrm in transit. But, they don’t. They get the gentle embrace of Mercy. ?

Russia has continued to use the Iranian base since their initial raids from there. No, they were not kicked out, that was western propaganda. The Iranians were only upset over Russia’s public statements over their use of the base. The ‘spat’ is in the past. Like Rain says, the s-400 is a defensive system, not offensive. You are wrong on both counts.

the problem is, Russia relies on syrians and iranis to make the blitzkrieg happen on the ground. i don’t know how capable SAA is for this. after all, the only blitzkrieg was done by ISIS, and that was in a power vacuum. While i don’t agree with you that ceasefire was a complete disaster, i do think it was a pretty decent fail. after all, russian diplomacy did score (if this means anything).

If the Russians used tactics like you assume Stalin would, that would only give the west more ammunition for their propaganda, which might enable them to offer a united front with which to oppose Russian and Syrian forces. Putin and Lavrov are taking away their propaganda points and are being quite successful in prosecuting the war. Lets not forget that they have the terrorists on the run, without massive civilian casualties. Also, the SAA does not have manpower to waste in an all out frontal attack, which would no doubt cost many lives needlessly. As you say, how many terrorists have laid down their arms for amnesty, which removes them from the battle with out SAA/Russian troop losses. Putin and Lavrov know what they are doing. Stalins way would be more brutal, costly and counter-productive.

There is no good option to blitzkreig into E Aleppo, it is a built up and crowded urban area with IED’s and shooters around every street corner. The SAA and allies would suffer heavy casualties and Russia would be slammed by the world media. Lavrov and Putin decided to give the ceasefire a try because it’s in their best interest. The Jihadist opened fire on the humanitarian corridoors, stopping any aid deliveries to E Aleppo. The Jihadist (not the ”moderate” rebels, if they exist!) are in control. Perhaps Lavrov needed to prove this point to the western press. I’m sure the SAA would prefer to settle E Aleppo like the other areas around Damascus. I hope this will happen before the people starve! If they run out of fighters, ammo and morale this may happen (hopefully soon).

I am assuming that events such as these are in the nature of tests since other less expensive weapons could have been used.

Yep, use one of those next time. It’ll do $100B worth of improvements to idlib…