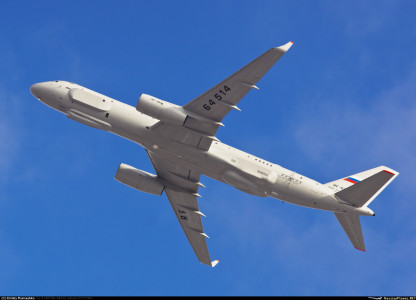 Flightradar24 indicates that on the evening of February 15, 2016, the Hmeimim airbase in Syria which is used by the Russian air group has seen the arrival of the Tu-214R remote reconnaissance aircraft belonging to the Russian Aerospace Forces (RF-64514). Judging by the flight path, it arrived from the Kazan Aviation Factory, which is associated with the Tupolev Aircraft Corporation.

The two Tu-214R were manufactured under a 2002 contract with Tupolev. Their onboard equipment was designed by the Vega Radio Instruments Concern.

J.Hawk’s Comment: The flight route is interesting when one considers the qualities of the aircraft in question. The Tu-214R is equipped with a synthetic-aperture radar (whose flat antennae are visible on the sides of the fuselage) capable of tracking moving ground targets at ranges of several hundred kilometers and providing targeting data to aircraft and ground-based missile systems. It is, in effect, the airborne component of the “reconnaissance-strike complex” that enables enemy land movements to be detected and interdicted practically in real time. The Tu-214’s flight path would have enabled it to take a very close look at ground movements in ISIS-held territory, including the all-important Raqqa area, and to examine the goings-on in Jordan, where Saudi forces are demonstrating their presence and the British military is holding an exercise. Last but not least, it likely sneaked a peek into Turkish territory to as it was approaching Hmeimim. Its presence indicates the Russian military has become interested in establishing a clear picture of ground movements in Syria and also in adjacent countries in order to provide both early warning against a possible overland invasion of the country and targeting information against such forces for aircraft and long-range rocket artillery.

I’m really impressed with the high number of strategic and tactical state of the art equipment Russia is sending to Syria. I can imagine that Washington, Ankara and Ryiad are fuming about this.

Thats what happens if you are arrogant and ignore the opposition and their capabilities for well over a decade.

We are upset at our USSA (United Soviet States of American) government, which has wronged modern Russia, and the good people of Syria and Iran and Lebanon. We have had enough, we have a Democratic-Revolution in progress right now in America called Voting for Trump! Will bring better relations with Russia, and will right the wrongs done to Syria and Iran and Lebanon. We are sick and tired of the Zionist-bigots. We are bringing change, hold on Syria, when Trump is president, Syria will be undo no more threats, and peace will be restored to the good Syrian people. Turkey and Saudi Arabia are going to pay, and plus they will loose their relationships with America. We want good relations with Syria and Iran, not Turkey and Israel. http://antizionistleague.com/