In the early hours of today the Greek parliament in Athens  had a vote of confidence for Alexis Tsipras’ second term as premier. The result was that 155 members of parliament out of 299 favoured his return to power. Naturally support came from Syriza and the Independent Greeks (ANEL) who were Tsipras’ coalition partners in his first term.

The Greek prime minister’s agenda will be to finish the review of his country’s bailout before the end of November. In this way Greece will have its banks recapitalised by the end of the year and begin talks about debt restructuring.

So far Greece has received around 270 billion dollars from its principal lenders, which include the European Central Bank, the International Monetary Fund and the other eurozone member states. This was under two bailout schemes which expired on the 30th June.

The lenders promised to give aid only if the Greek establishment implemented austerity measures such as pension cuts. Tsipras initially rejected these terms suggested  for the third bailout. Even the majority of Greeks said ‘No’ in a referendum back in June. Subsequently he agreed to introduce new austerity laws in order to get a loan of 95 billion dollars (equivalent to 86 billion euros), much to the the despair of his citizens.

By the middle of this month the first set of reforms under the third bailout package will need to be turned into law. 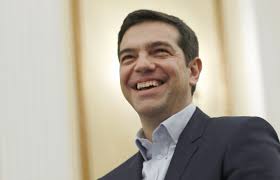