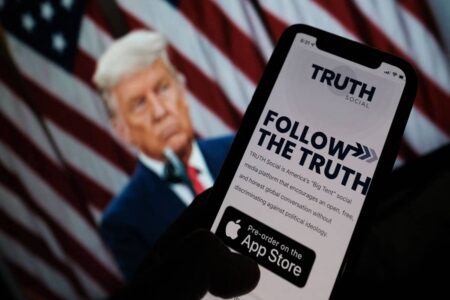 The new social media network announced by former US President Donald Trump could become a refuge for all those who have been silenced. This could pay off for Donald Trump if he has plans to participate in the 2024 election as well, but a major problem he faces is how to bypass the monopoly held by the likes of Twitter and Facebook, among others. The announcement to launch a new social media network called “Truth” is, according to the former president, a way to “stand up to the tyranny of the tech giants.”

Trump said during the launch announcement that we live in a world where the Taliban have a huge presence on television, while, as he says, the most favorite American president has been silenced. He added that a response to the monopoly will soon follow.

There is a real need for such a platform as a large number of social media users have been deleted and prevented from functioning on mainstream platforms. Trump himself has been censored on Twitter and Facebook. At the beginning of his presidential campaign in 2015, Trump had about three million followers on Twitter, but by the time he was removed from the platform, he had 90 million.

It can be expected that Truth can attract a large number of conservative users from Facebook and Twitter, adding not just an economic incentive for creating a social media network, but a political one too. As announced, his platform should start operating from February 2022, meaning that by the time of the next US election, he would have had two years to rebuild his audience so he can circumvent censorship from rival social media outlets and mainstream media.

However, it can be expected that a new platform would have major problems if wanting to challenge major social media networks because of the sheer vastness of resources that Twitter, Facebook and Google have at their disposal. Facebook, which has three billion users, has thousands of servers to maintain the incredible amount of traffic it has at any given moment. It is not known how many users Truth is expecting, nor the resources that will be available, but it certainly will not be at the level of Facebook.

Amazon, one of the world’s largest hosting providers, suspended Parler, another social media network that came to prominence after Trump was censored in mid-2020. If Trump wants to truly be free from potential censorship, then he must build all the necessary infrastructure, something which will surely be a costly endeavor.

It is recalled that Parler, a network used by American conservatives, was removed from Apple and Google stores due to alleged “protection of user safety.” Parler sued Amazon for the severe blow it suffered from the interruption of web hosting services after Apple and Google stopped distributing its app.

Whether Trump’s platform can overcome all these obstacles, it also raises the question on whether it could attract people of different political orientations. It is unlikely that liberals and leftists would sign up to the platform and will likely remain on Twitter, Facebook and other social media platforms.

It is recalled that there are recent witness testimonies from a hearing in the American Congress that claimed Facebook was censor heavy and too liberal. There are likely a large number of dissatisfied users on Facebook and Twitter who might be interested in switching to another platform. Not only are conservatives being silenced on mainstream social media platforms, but even users who criticize Israel. On Facebook, even writing Hezbollah in a post could see the user warned or banned.

In that sense, Trump’s idea is good, but the question is whether he will be able to replace mainstream social media platforms. The idea will certainly not appeal to Trump’s opponents, especially given their heightened control in being able to censor people who do not have similar views and ideologies.

None-the-less, it is unlikely that Truth will be able to topple Facebook or Twitter in the short to medium term, but it will certainly act as a platform to give a voice to many who have been silenced. With Trump likely to get millions of followers once his platform is online, it will be impossible for the former president to again be silenced. At the same time, inevitably mainstream media will be unable to keep their eyes off Trump’s posts on Truth and they will surely write headlines about it. Such a platform could serve Trump favorably if he seeks to be re-elected in 2024.

Call it Truth but it will be just another propaganda outlet.

Either way, it is run by mass media’s influence. That is why control of the media is so important.

The Constitution is a lawless document based on lies and deception. It builds governance and lawmaking on the shifting sands of the whims of man.

A house built on sand WILL fall.

Yes, Democracy is tyranny of mob, but not that mob decides anything, it’s top-down process,top has the power and down/mob has the illusion of decision,

RT can help Trump a lot, RT has been helping Trump since 2016,

Orange Man Social will never get a foot in the door of the app store duopoly run by Appall and Goolag.

Trump should call the outlet “Pravda” which means Truth in Russian….Nah… but things have gotten so convoluted that even naming something as “Truth” is liable to provoke skepticism.