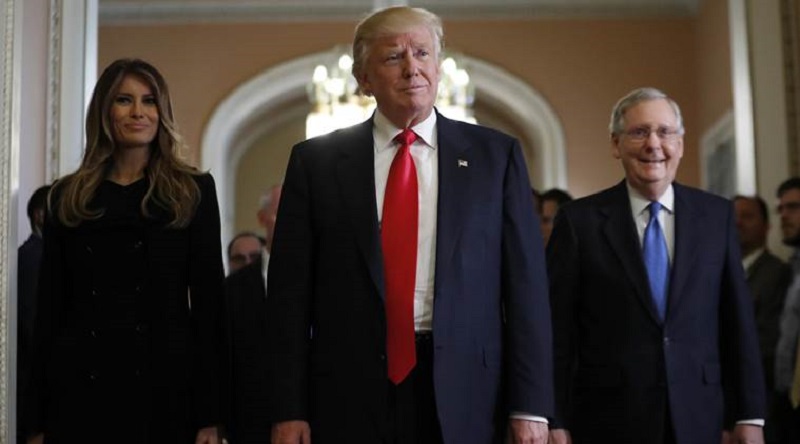 Last night, US President Donald Trump ordered the US Navy to conduct missile strikes against a military airport near the Syrian city of Homs in response to what he said was a chemical attack made by the Assad government in against civilians in the village of Khan Sheikhoun in the province of Idlib.

While the Russian Defense Ministry already slammed the attack, describing its combat efficiency as “quite poor,” it will be premature to say that the Trump administration used 59 Tomahawk cruise missiles to destroye a material storage depot and few old MiG-23 aircraft.

There should be some “non-military” reasons behind Trump’s actions. Let’s take a brief look at them:

Trump faces a very complicated political situation inside the United States. His administration is under a constant pressure from the mainstream media and the global elites that see him as an enemy. Our friend, TheSaker wrote about this issue here and here. Furthermore, acrroding to some experts, Trump is slowly losing this standoff.

Thus, the Trump administration used a pretext of alleged chemical attack made by the “Assad regime” against civilians in Idlib province to show own strength and get some additional points in the ongoing US internal political game. Just look at the reaction in the US media:

“We now have a president who said something and backed up his words with action.” –@FredFleitz pic.twitter.com/A5BrxnaHR3

Or the New Your Times’ article on the issue (source):

The images were heartbreaking: Children gasping and choking for breath, their mouths foaming. A grief-stricken father, cradling the lifeless bodies of his two children, swaddled in white blankets. But they were also familiar, a harrowing flashback to 2013, when the Syrian government unleashed the last major poison gas attack on its own people.

This time, though, a new American president was seeing the pictures and absorbing the horror.

Donald J. Trump has always taken pride in his readiness to act on instinct, whether in real estate or reality television. On Thursday, an emotional President Trump took the greatest risk of his young presidency, ordering a retaliatory missile strike on Syria for its latest chemical weapons attack. In a dizzying 48 hours, he upended a foreign policy doctrine based on putting America first and avoiding messy conflicts in distant lands.

At the same time, the idea to blame Assad for the chemical attack in Idlib was used because Trump had not been able to gain any major PR victory against ISIS in Raqqah and western Mosul. The both areas remained in the hands of the terrorists despitie the increased US military efforts.

Furthermore, the “war on terror” itself (especially if this way is far away from the US) does not allow to consolidate people and elites. The possible war on the “bloody Assad regime” and the confrontation with “Putin’s Russia” are much more useful topics for this goal.

On the other hand, some “Desert Storm”-like operation in Syria (in case of limited loses in manpower and equipment, for sure) with usage of expensive military means (like Tomahawk cruise missiles) would allow the United States’ military industrial complex to gain eye-watering revenues and to circumstantially boost the US economy itself.

But did Mr. Trump really evaluate the cost of his political subterfuge and forecast all possible consequences?

Stop making excuses for Trump, he lacks Presidency credentials but unfortunately so did the other candidates. Trump is a weasel, corrupt and inept. Going around firing your staff relentlessly shows very poor quality in leadership, management and the ability to be a leader.

The last president the USA had was Reagan and before him Kennedy. That is why they tried to kill Reagan and did kill Kennedy.

Mr. Putin’s choice of friend hasn’t gone well with Trump. He invested and depended on a wrong man. It’s the nature of fascists that they start with popular slogans and do the opposite when they get into power.

Only an imbecile would believe that Putin had ANY kind of influence on the elections. It’s the other way around.

I haven’t said that Putin influenced Trump’s victory. But anybody with a little common sense can understand Putin’s support for Trump.

Everybody with a little common sense will understand that Trump is actually worse than Clinton bcs he pretended to be different and less anti-Russian. Everybody with a brain that is actually actively being used will understand that the USA sees Russia’s attempts to regain her old strength by putting all those shards back together again as a mortal danger. Because the USA and all European colonial powers have always worked this way. They CAN NOT thrive without supressing and exploiting other nations. The Russian and even Chinese civilizations are different from that, but also different from each other. And this is a struggle of civilizations, a fight of ideas. Today it’s multipolar vs unipolar world. Tomorrow it might be Russia vs China.

That’s the present. The scenario was different before the recent US presidential election. Russia, along with many US electors, believed that Trump was different from the neocons.

In the name ‘retaliation’ for gasping Syrian kids in Idlib, Trump send 59 Tomahawk to struck Syrian military facility, only to kill several old Migs, after that ISIS show-up for blood, Trump helping terrorist, same with HTS terrorist on Idlib their laughing. That will make Syrian civil and kid happy? Very convincing, very convincing…

Trump totally screwed up and lost a lot of supporters, like myself. He has to man up and stand his ground. This is leadership. Also, he needs to depend less on his “advisors” and think for himself. I wonder sometimes is he just as stupid as all the other Americans I deal with that don’t know their geography or what’s going on in the world or show any interest. This is why I am for the draft. Once all American’s have skin in the game, they will pay attention. Interesting we don’t have draft since Vietnam. These crafty weasels don’t want people thinking. The picture above of Trump with his wife I don’t agree with. Keep her out of his foolishness. McConnell is a neocon and typical American moron politician.

After this final, I mean FINAL, revelation that Trump is NOT some kind of good guy in any way but just as much puppet of the same elites than the presidents before him, you would think that people would be able to see that the game had never changed. But alas, southfront continues to “provide” us with “alternative” and “diverse” opinions. The opinions are, in this case, absolute propaganda or else they stem from braindead people. Good night gracie!

Russia will first protect its strategic interests and in doing so cannot afford to back down from protecting its allies. Syria is the proposed route for the OPEC pipeline and the country is sitting on huge oil reserves. Then there are the copious gas finds off its coast. Finally, all this wealth is right next door to Israel. If the nation was as poor as Niger in Africa, for instance, there would be no Western proxy war in Syria.

The US action undoubtedly has the support of Saudi Arabia, Israel, the Western bankster and corporate controlled nations, but it will most likely cause considerable international blow-back and further mistrust of the Trump presidency. The more Russia is scapegoated and demonized the more the international community will likely want something different from Western hegemony and support Russia. The continued US-led regime change strategy for the Levant will most likely turn out to be more short-term gain for long-term pain not only for nations in the Levant, but for the world at large.

(((Jared Kushner))) is behind Israels expanded war against the people of Syria using the USSA which is ZOG territory has pawns to pimp off against Syria. Iran must rush in at least 15 advanced S-373 Bavar batteries to shoot down incoming missiles and Jewish-fighters. Russia must Must MUST deliver to Syria S-400 system now, S-300 is junk, Syria and Iran need full refunds on S-300 junk. S-400 systems all around. And while you are at it Putin, be a pall and send that belated Christmas present to North Korea I know you meant to send, make it an S-400 system also!

They were deliberately not targeted there is another game afoot!

Right! Putin should go all in…. More S400, 50,000 Russian Soldiers to Syria, Replacing old s200 and Jets with new russian ones… Increase the air-attacks on HTS…

Yinon plan and Greater Israel Project is the most important issue behind this, Trump is just a pupet.