President Donald Trump’s reelection campaign released a “Platinum Plan” that outlines promises he is making to black Americans over the next 4 years, if he remains the U.S. president.

As The Epoch Times’ Mimi Nguyen Ly details below, the plan seeks to uplift black communities through, in part, an investment of about $500 billion.

“After years of neglect by Democrat politicians, black Americans have finally found a true advocate in President Trump, who is working tirelessly to deliver greater opportunity, security, prosperity, and fairness to their communities.

“While Joe Biden takes black voters for granted—and even questions their blackness if they dare to support conservative ideals—President Trump is working hard to earn the black vote through his Platinum Plan.”

The “Platinum Plan” (pdf) is based on four core values – opportunity, security, prosperity, and fairness.

The plan seeks to add some 3 million new jobs for the black community, create 500,000 new black-owned businesses, and increase access to capital in black communities by almost $500 billion.

Part of the plan includes bringing back manufacturing jobs to the United States to advance jobs and business, and having an immigration policy that protects American jobs. It also calls to “increase activity in opportunity zones including benefits for local hires.”

Trump is also promising access to better education and job training opportunities, and will work to “advance home ownership opportunities and enhance financial literacy in the black community,” according to the plan.

People listen while President Donald Trump speaks during an event for black supporters at the Cobb Galleria Centre in Atlanta, Georgia, on Sept. 25, 2020. (Brendan Smialowski/AFP via Getty Images)

Over the next 4 years, Trump promises to lower the cost of healthcare, and “bring better and tailored healthcare to address historic disparities” for the black community. The president will also ensure that black churches can compete for federal resources, and “defend religious freedom exemptions to respect religious believers and always protect life.”

The president also seeks to further criminal justice reform, with his plan saying that he will “commit to working on a Second Step Act.” He will also work towards “safe urban neighborhoods with highest policing standards,” the plan states.

Other aspects of the plan includes making Juneteenth a National Holiday, prosecuting the KKK, designating Antifa a terrorist organization, and making lynching a national hate crime.

Trump’s move to designate Antifa as a terrorist organization came after FBI Director Christopher Wray told Congress that those who engaged in recent violent protests are targets of serious FBI investigations.

“We have seen Antifa adherence coalescing and working together in what I would describe as small groups and nodes,” Wray has said. Wray added that the bureau is conducting multiple investigations “into some anarchist violent extremists, some of whom operate through these nodes.”

Before that, Attorney General William Barr in August said Antifa is a “revolutionary group” that is bent on establishing communism or socialism in the United States.

“They are a revolutionary group that is interested in some form of socialism, communism. They’re essentially Bolsheviks. Their tactics are fascistic,” Barr said in an interview with Fox News on Aug. 9.

“Though black Americans have traditionally been shut out of opportunities to grow our own businesses and create generational wealth, President Trump is working hard to give us access to the American Dream,” K. Carl Smith, Black Voices for Trump advisory board member, said in a statement.

“President Trump is a businessman and understands that pride, community, and dedication are built through entrepreneurship.” 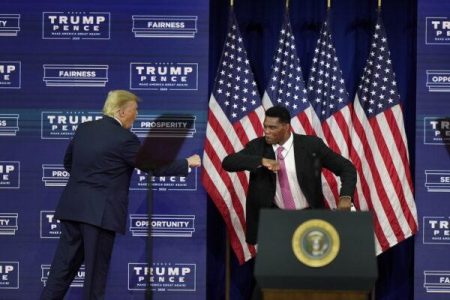 “No one in Washington politics today has done more to hurt black Americans than Joe Biden,” Trump told supporters on Friday. “For half a century, Joe’s personally advocated or enacted virtually every policy that has caused pain and suffering in the black community. You know that.”

Trump is throwing away money like a drunken sailor lucky it is not his money it’s Goldbergs and it comes with interest.

guest
Reply to  In Exile

US Jew parasites should be declared a global terrorist threat against humanity.

Trump is taking the failed US faster and faster towards a civil war.

There will be civil war anyway, because that’s The Plan…

Leftists Brains splattered all over the sidewalks …

Is a beautiful morning !

It’s a beautiful morning, ah I think I’ll go outside for a while And just smile Just take in some clean fresh air, boy No sense in staying inside If the weather’s fine and you’ve got the time It’s your chance to wake up and plan another brand new day Either way

Won’t accomplish anything and it won’t gain much black support either. Sadly most of them just want free things, not more opportunities, that’s why they overwhelmingly vote Democrat/Socialist.

As for Antifa, good call on that although it’s funny how he had to lump the KKK in with them, so as not to seem biased. They don’t even really exist anymore, they’re just a honeypot used by Feds to radicalize, catch and imprison extremists whom otherwise probably wouldn’t have broken any laws. Same with a lot of Neo Nazi groups, they’re just bait to catch stupid people.

If you read carefully the “platinum plan” for “black” people uses old trick language like “minority” , ” “people of colour” etc . This is trick language to mean women, LGBT, Latinos, immigrants, Asians , Arabs etc. Black people will receive a tiny fraction. This is an old trick since the 60s with “affirmative action” where white women were branded as a “minority ” and received most of those benefits.

The Diamond plan if the Platinum one will fail. https://www.youtube.com/watch?v=Iyo7zeLNPJg

The sad reality is that some Black people in the US will really believe Trump’s latest bucket of horse dung. Democrats, Republicans, they’re just two heads of the same rigged, rotten political system. If you are not a millionaire, billionaire, politician, highly paid government worker or political campaign donor (who gives bribes and payoffs to both sides for personal gain), then you are not even a pimple on their asses. Only two major political parties in a country of ~331 million people is a real sucker’s game. Until there are 3rd, 4th or 5th parties that have national recognition, nothing will change. Add to this the BILLIONS of dollars that buy the politicians and you have the worst form of democracy imaginable.

Lol, now he calls the KKK terrorists? Too late. Antifa doesn’t even exist. It won’t prevent America from reaping what it sows. He who lives by the sword will die by the sword. Something Bible thumpers and such seem to forget.

Dems. it´s the Dems, they are the f__ing Terrorists !

80 years plus Kosher Club(Minus 1) , like Feinstein and all her Kosher “friends” …

Stop this shit now, or “they” will come and circumcise you too !

What stopped him from doing thing all this time he was president? Was too busy trying to get a war going against Venezuela and Iran and forcing other countries to keep him company in kissing Netanyahoo’s ass I guess. This is just a pre-election commercial. USA is going down the drain.

The KKK is a masonic organisation, which is necessary with in context of hegelian dialectic to fight the other masonic organisations like the AntiFa. Thesis – Antithesis – Synthesis, that’s how they steer the world. You create a conflict and rule over both conflicting parties, thereby in the meantime you create death, and make stuff acceptable which wasn’t acceptable before…

This is great news. The Democrats have failed American blacks for generations. Blacks have nothing to lose by rolling the dice on a vote for Trump. Trump delivered on pardons for what were clearly draconian and racially-based sentencing for non-violent drug offenses. I think he will make a sincere attempt to deliver on this Platinum Plan. This is an age where the old ways are being thrown out and new ways are replacing them. Let the institutionalized racism that is the fruit of the Democratic party’s failed approach to black communities be cast out as well and replaced with something that actually has a chance of permanently empowering them.

Buying votes. We have spent so much money and it does not fix a thing. What does ANTIFA have to do with Blacks. Plus the Knights of the Circle Clan are a Christian Organization. Meanwhile BLM rioters are burning down cities. Law Suits will be coming out of the woodwork. Has not solved anything in 159 years.

America is reaping what it sows. Too late for them to call KKK terrorists and antifa doesn’t exist as an organization. That’s zog for you.