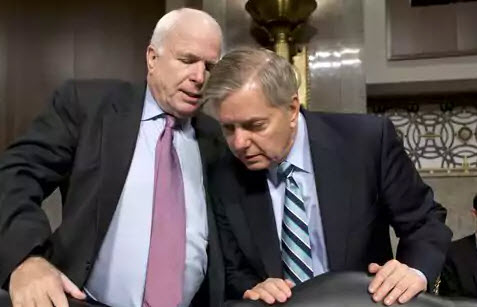 “Our government has a responsibility to defend our borders, but we must do so in a way that makes us safer and upholds all that is decent and exceptional about our nation.

“It is clear from the confusion at our airports across the nation that President Trump’s executive order was not properly vetted. We are particularly concerned by reports that this order went into effect with little to no consultation with the Departments of State, Defense, Justice, and Homeland Security.

“Such a hasty process risks harmful results. We should not stop green-card holders from returning to the country they call home. We should not stop those who have served as interpreters for our military and diplomats from seeking refuge in the country they risked their lives to help. And we should not turn our backs on those refugees who have been shown through extensive vetting to pose no demonstrable threat to our nation, and who have suffered unspeakable horrors, most of them women and children.

President Trump decided to let them have it…

The joint statement of former presidential candidates John McCain & Lindsey Graham is wrong – they are sadly weak on immigration. The two…

…Senators should focus their energies on ISIS, illegal immigration and border security instead of always looking to start World War III.

Trolled by the Donald.

John McShitstain and Flimsy Gayman can go and fck themselves.

Trump or mc cain both american terrorists….until war crimes trials for the west and obama…then no change….world war continues in zionazi occupied ukraine….

This was actually pretty shocking for me. I had read a piece on Bloomberg, I think this last friday the 27th, by a writer telling Senator McCain to get up and tell President Trump to go easy or he better watch it with his confirmation picks. This was Presidents Trumps´ response to that kind of thinking. The Donald is steam rolling these guys and it will not stop. Eventually the protestors, media contra to him and politicians are going to get very battle weary of this. Mr. Soros et al, he will bleed you guys white of your cash and cut the roots out from your business enterprizes if you keep it up. President Trump has a relentless personality and nobody is prepared for it. It´s my take on this. A good day to all.

I agree John. He is the Dad that will scold you and occasionally spank you when you screw up. He has to be careful the way he cooperates with Russia because the establishment has plans for world dominion. My only concern is his closeness to Israel. No change there as far as I can see.

Thank you hhabana. I don´t want to get too much ahead of what I see, so I am going to stay away from Israel, other than to say I am watching Syria for a reflection on that. Russia is in town and noone can just do it the old way anymore. The tempo of people who were with the global cabal ( it was never a disciplined group but, a general herd of groups ), that are stampeding to get out of Trump´s way, is growing. I want to observe closely for the first year. It will take a while to get a good view. A great day to you.

I would like to show my respect for all american voters who didnt elected McCain in 2008, if this madman would’ve been elected, doomsday clock wouldn’t be at 2 and a half minutes before midnight, it would be a minute past midnight.