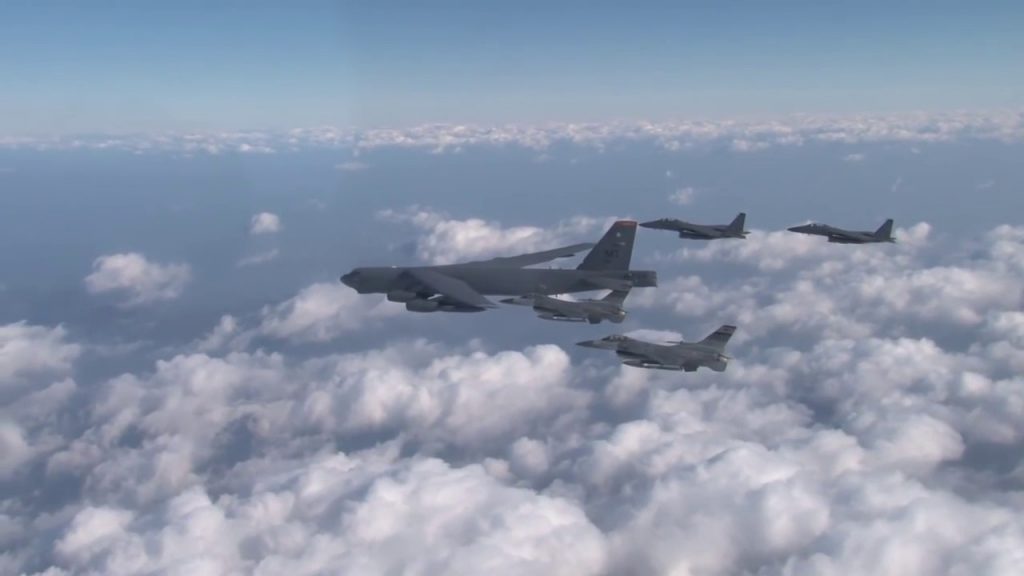 The US is committed to use all “diplomatic, conventional and – here’s the big one – nuclear – capabilities at our disposal” to defend itself and its allies from the so-called North Korea threat, President Trump said during a phone call with Japanese Prime Minister Shinzo Abe.

This was the first time when Trump noted a possible usage of nuclear weapons against North Korea.

The sides discussed how the two countries should respond to North Korea’s sixth nuclear test that came amid the continued tensions between the US and the Asian country.

Earlier, US Defense Secretary James Mattis said that any threat to the US or its territories would be met with a “massive military response.”

READ MORE: North Korea Vs. South Korea – Comparison Of Military Capabilities. What Would a New War in Korea Look Like?

A humiliated empire and especially an empire fallen down is the most dangerous one, history taught us this lesson several times. The french and British are still hurt by this, the Germans went crazy on this and it won’t be any different for the USA.

A tree falling makes more noise than a forest growing. The question is, which growing trees will be in the way of the falling tree? Hopefully non, but there is no guarantee for that.

Indeed we live in dangerous times BUT the US mainland has not been under serious threat of counter attack for over 100 years , so any nuclear missiles thrown around by the US in a fit of pique will be answered by the total devastation of the US and I hope Israel.

This is all BS. The USA will not strike NK if they do then SK with be gone and China has stated they will aid NK if it’s attacked, so might as well say Japan and Taiwan will also fall to China. The U.S navy can’t even spot merchant ships, how will they go against warships? They are now saying NK has a H bomb so in the last 8 to 12 weeks they have gone from an atomic weapon with poor missiles to a H bomb and ICBM’s. So what else do they have? If the roles were reversed how would the USA like it if China or Russia did mock nuclear attacks off the Florida coast during war games with Cuba? NK only gets into this stance objecting to the war games in SK with the USA, Japan etc.

It’s official – trump is a fucking idiot and has sold out to the Neo-Con war-caballists.

USA cannot strike a country about which there is a serious suspicion that it has nukes. Or does Washington really think they can get away with a “pre-emptive strike” against a country that, while perhaps unable to strike american soil, very much can obliterate SK in a matter of hours, and is certainly capable of nuking, or at least massively bombarding Tokyo? USA had already lost their opportunity for regime change in NK, and are trying to at least threaten NK into doing their bidding. NK called their bluff and openly taunts them, knowing full well that americans can’t do shit.

The sooner USA realises the situation and decides to, instead, try and normalise relations with NK, the better. Of course, they’ll first try bullying it with more sanctions (the only thing they can do to it at this point), which too will be laughed at by NK

BOMBUSA is provoking and provoking NK and treating it, and it manipulates the information saying that Nk is provoking USA and treating USA. ¿ Is the people so stupid that he can believe that someone will provoke a nation with thousand of nuclear bomb and like to bomb anything ? Please, be rational. You might say “but NK are not rational they are crasy,” yes that is pure western propaganda. NK is just trying to defense itself from USA, and it will be destroy if Russia and China do not help NK. NK is a brother of China and Russia, and I guess, making war with NK will be making war with China and Russia, as simple like that. So, if the crasy psyco people of USA decides to make war with NK, better we pray GOD since WWIII is very likely.

The US going full on being a Hellish Buffoon and using Evil Stupid Thuggery again!

How much radioactive fallout is China going to tolerate drifting in from NK? China is going to sit on its hands while millions of its citizens are poisoned and vast areas of its territories become inhabitable for the next 800 thousand years? Fuck-wits like Trump and the neo-cons are going to incite a massive preemptive first strike on the USA at this rate.