On April 30th, US President Donald Trump said that he had seen evidence that COVID-19 did, in fact, originate in the Wuhan Institute of Virology.

“Have you seen anything at this point that gives you a high degree of confidence that the [Wuhan lab] was the origin?”

To which Trump responded:

“Yes, I have… Yeah I have, and I think the WHO should be ashamed of themselves because they were like the public relations agency for China.”

“They shouldn’t be making excuses when people make horrible mistakes, especially mistakes that are causing hundreds of thousands of people around the world to die,” the president continued. “I think the World Health Organization should be ashamed of themselves.”

Later on, when the reporter asked for more information, Trump responded that he is not allowed to say anything more.

Earlier, Trump was asked whether Chinese President Xi Jinping should be held responsible for the coronavirus outbreak.

And it should be reminded that ZeroHedge faced repercussions for saying specifically what Trump admitted, but back in March.

Never forget that @zerohedge got banned for saying this almost two months ago.https://t.co/sYgApMKIEs

In the US’ fight against COVID-19, Michigan government, Democrat Gretchen Whitmer issued an extension to the lockdown until May 28th, and faced strong opposition from protesters.

Officers took protestors temperatures as they entered the Capitol building in Lansing. pic.twitter.com/8sBngaYse0

Sadly, today we must report 460 additional deaths from #COVID19.

California’s COVID-19 deaths spiked again yesterday to 95, while the number of positive cases climbed 5.2%, as both deaths and cases in the state spiked above the medium-term average for the second day in a row.

The Wall Street Journal reported that the US Department of Defense had ordered 100,000 body bags, in preparation for a “worst case scenario.”

The US has been stockpiling these body bags since the beginning of the administration’s response to the outbreak in the US. Trump said he expected the virus could cost as many as 70,000 lives, though the US appears on track to surpass that number by a wide margin.

Some states, at the same time are showing signs of improving, and lockdowns are about to be lifted in some, such as Georgia.

Governor Brian Kemp, however, said that the elderly and medically fragile need to remain at home until at least June 12th.

“What we’ve done has worked,” Kemp said in the interview. “It’s given us time to build our hospital infrastructure capacity, get ventilators and ramp up testing. That’s what really drove our decision.”

Another one of Kemp’s orders, also extended through June, bars visitors and nonessential workers from entering nursing homes, restricts group activities and meals and requires any worker who tests positive for the virus to be quarantined.

“I felt like the negative effects of not having our economy starting to open up was beginning to have the same weight as the virus itself, especially if you weren’t in the medically fragile category or someone in a long-term care facility,” he said. “For most of the rest of Georgia, the effect has been minimal.”

In the EU, Sweden called on the European Union to investigate the causes behind the COVID-19 pandemic, which prompted a sharp response from China.

What is interesting is who made the intelligence agencies contradict Trump on this matter.

Maybee Trump was created there.

A British woman who has worked at the Wuhan site for at least two years recently voiced her opinion on farcebook. She says there is zero chance the virus escaped that facility and had to come from an outside source. Of course she got panned by farcebook as they certainly do not want real experts with real experience spreading their knowledge amongst the plebs on farcebook. That would be too much reality for them to handle.

The head virologist at Wuhan had already shown that the virus that ran rampant in China was not from any version kept at the lab…not that that will ever be shared with the public. https://www.fort-russ.com/2020/04/renown-coronavirus-expert-dr-shi-zhengli-provides-proof-sars-cov-2-not-an-accidental-release-from-wuhan/ We have our version of events, damn any proof otherwise. There’s money to be made! We like money!

And then there’s this: https://www.lewrockwell.com/2020/03/no_author/covid-19-further-evidence-that-the-virus-originated-in-the-us/ My, my. Maybe China will sue us.

No doubt the Trumpster gets his info from those who have a vested interest in vaccines and ID cards.

That China eh? who closed down their country faster than any other and are now being blamed along the lines of Weapons Of Mass Destruction. Remember that?
That lie cost thousands of lives and the destruction of countries. It was also a very blantant and clumsy example of your gov’t lying to you, in your face, and then sending your sons abroad to die for the lie.

What we are witnessing are distractions. Why worry over job losses, food shortages, poverty and runaway debt, when the big bad flu virus could get you anytime?
All this coming from an admin who let Epstein slip through their fingers, who lets Wall St run wild, and continues to bail out banks and big business to the tune of trillions. It used to be billions but the scam has moved on since then.
Middle class america is gone. Now just the rich & poor remain, much like any third world country.

You’re are being herded for the sake of a declining and out of control american empire run by schizophrenics and big business. The truth will out. Whether american’s or european’s will believe it is another matter. They were easily duped whilst their economies were wrecked, Sept 11th, the Gulf wars, big bad Russia, so the chances are against it. Get ready for big bad China.

As an aside, China has seen quite a few outbreaks of viruses. The Bird flu, the Swine flu and now the Coronaflu. If i was a gambler, i would say the odds on someone trying to destroy China’s food supply are very good.

Google Eyes of darkness Wuhan-400.The virus was made in Wuhan laboratory then the Chinese scientists steal the information and fled to USA in 1980.Due to the trade sanctioned CCP of China went in desperate situation and USA secret Angens headed by Pompeo and finance by Bill Gates make a deal with Chinese CCP for the release of this virus and full implementation of 5G radioactive networks. The gaol of WHO is to start vaccinations worldwide to inject people with microchip which is in injection needles.China will on his part continue to donate conteminated gloves and mask plus vaccines. While coronavirus does not have cure in China it self.

Just saw the MSM version on NBC this morning. Full court press…TrumpCo is going full bore blaming China. Fear not…Americans are still asleep and being led by the nose by the scum we call politicians. The dems are blasting those that helped fund the lab, which still pushes the idea that it’s all on China…regardless the facts coming out that the lab had nothing to do with the outbreak. Funny that these two clown acts are supporting each other, even as they seem to be accusing each other of ineptitude. Italy has said it’s likely they had their outbreak start at the same time or before China. Both ‘sides of the isle’ are liars and until the American people start to stop and begin to think about all the BS they’re hearing and the likelihood that it’s us that’s lying, not the rest of the world, these ops will continue. Right up to the point of these attacks…collapse of the world economy. Wait and see if the corporations don’t start to try to step in to ‘save’ us. Of course, the economies have to fully collapse first. We’ve been seeing stage 1 so far. The real economic hurt is coming…CEOs don’t dump stocks and run for the hills for no reason. As the old saying goes…the worst is yet to come.

The noisy parade led by a madman just keeps rolling on.

Political language today in the United is at precisely the level of Orwell’s 1984 where “war is peace” and “ignorance is strength.”

The facts are, as of a couple of days ago:

America had 4.2% of the world’s population.

Yet America had 33% of the coronavirus infections and 27% of its deaths.

Trump’s government is desperately trying to blame the WHO and China for its own mismanagement.

Note, too, that back in the early days of China’s battle with the coronavirus, Trump was quoted in the press many times praising China’s brave efforts. But those quotes reflected a time when Trump was most focused on securing the best possible total trade deals with China.

Now his focus is on getting re-elected, despite his publicly-demonstrated incompetence in the pandemic, and doing so by blaming someone else, China and the WHO. This truly represents the worst possible kind of leadership, leadership that literally changes its facts to suit its latest purpose.

Then again, we have only US ‘experts’ and US governmental entities to get our numbers from. There are many examples of the numbers being jiggered. It’s in their best interests to push the idea that the US is in the grips of this plandemic. Vaccines will yet raise it’s ugly head as the only defense in the future. We’re already being pitched the ‘second wave’ scenario…and the death and destruction that will ‘surely follow’. Now they’re saying even those that carry anti-bodies will apparently be at risk. All the he said, she said is a show, as far as I am concerned. Vaccines will be back, count on it.

he’s a first class idiot, nincompoop,simpleton who goes yada yada yada whenever he sees a microphone or a telephone.

all you need to know is fort detrick closed down for 6 months from september 2019 for insecure work environment, the military games in wuhan in september 2019 and that a couple of hudred man strong military contingent from the disintegrating states of A participated. what more needs to be said.

who puts any value on the ranting and ravings of a madman more fit for the asylum for the insane than the white house.

then show the world your “evidence” mister trump, otherwise its all just more bullshit from you as far as im concerned

Trumpy’s info? [Corona Chan pouts a little and murmurs pensively]: That’s a lady’s secret, Mr. President. My secret. How dare you… You have taken away my dreams and my childhood. I have many more… destructive… forms, but you already knew that. 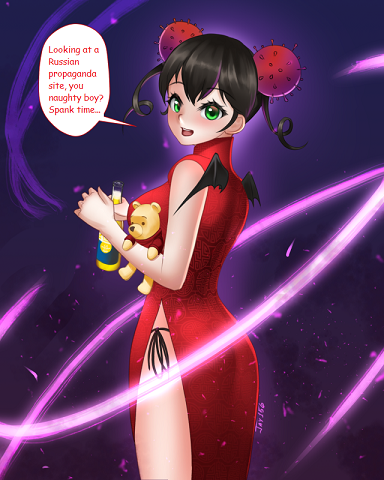