On September 5th, President Donald Trump and his close allies challenged the narrative of Bob Woodward’s new book. In it he is portrayed as “a 5th-grader” ready to make rash decisions such as the assassination of Syrian President Bashar al-Assad.

On September 4th, Trump tweeted saying that the contents of the book have been refuted, claiming that Woodward is a “Dem operative,” pointing to the timing of the nearing mid-term elections.

“The Woodward book has already been refuted and discredited by General (Secretary of Defense) James Mattis and General (Chief of Staff) John Kelly. Their quotes were made up frauds, a con on the public. Likewise, other stories and quotes. Woodward is a Dem operative? Notice timing?”

According to the claims in the book, senior aides such as Gary Cohn have had to “pluck” sensitive documents off Trump’s desk to prevent him from making hasty decisions. In an interview with the Daily Caller, Trump said most of the stories in the book were “nasty stuff” totally “made up” by famed Watergate reporter Woodward.

One of the excerpts in the book claimed that Trump ordered Secretary of Defense Jim Mattis to assassinate Syrian President Bashar al-Assad, following the 2017 Idlib chemical incident. “Let’s f**king kill him! Let’s go in. Let’s kill the f**king lot of them,” Trump allegedly told Mattis. “We’re not going to do any of that. We’re going to be much more measured,” the defense secretary allegedly told one of his senior staffers after that. In response to the claim, US Ambassador to the UN Nikki Haley denied that Trump ever planned to have Assad killed. “I have not once ever heard the president talk about assassinating Assad,” she said.

Woodward in his book also claimed that Trump once asked Jim Mattis why the US military and financially supports South Korea. Afterwards, Mattis allegedly told a close associate that the President had the understand of a fifth or sixth grade student.

Defense Secretary Jim Mattis personally rejected the claim made in the book. “In serving in this administration, the idea that I would show contempt for the elected Commander-in-Chief, President Trump, or tolerate disrespect to the office of the President from within our Department of Defense, is a product of someone’s rich imagination,” he said.

“He’s an idiot. It’s pointless to try to convince him of anything. He’s gone off the rails. We’re in crazytown,” Woodward cited the Chief of Staff. “I don’t even know why any of us are here. This is the worst job I’ve ever had.” John Kelly completely rejected all claims.

In addition to Former Chief Economic Adviser Gary Cohn who, according to Woodward, once stole a draft letter that would withdraw the US from the South Korea trade agreement. Former staff secretary Rob Porter, who handled the flow of presidential papers, according to the book, used similar tactics on several occasions.

According to the book, Egyptian President Abdel Fattah al-Sisi was worried that Special Counsel Robert Mueller’s probe might result in impeachment. He allegedly asked: “Donald, I’m worried about this investigation. Are you going to be around?”

Despite the denials by Trump and his aides, Woodward said that he “stands by” his reporting and the contents of his book.

To reinforce the notion that Donald Trump takes rash and hasty decisions, on September 4th the White House released a statement that said the US will respond “swiftly and appropriately” if Assad uses chemical weapons “again.”

“The United States is closely monitoring the situation in Idlib province, Syria, where millions of innocent civilians are under threat of an imminent Assad regime attack, backed by Russia and Iran,” the statement said. “Let us be clear, it remains our firm stance that if President Bashar al-Assad chooses to again use chemical weapons, the United States and its Allies will respond swiftly and appropriately,” it continued.

The statement comes after on August 29th the Russian Ambassador to US Anatoly Antonov warned US Assistant Secretary of State for Near Eastern Affairs David Satterfield and Washington’s new representative for Syria, Jim Jeffrey of a possible chemical attack, staged by Syrian rebels, not the government. The attack was to happen in the Idlib province.

“We warned the United States against yet another unjustified and illegal act of aggression in Syria. Escalation of tensions in Syria is not in anyone’s national interests,” the embassy said in a statement.

Russian Defense Ministry Spokesman Igor Konashenkov said that such an attack would be blamed on Damascus and will “serve as another reason for the US, the UK and France to hit Syrian government targets with air strikes.”

According to Konashenkov, the Hayat Tahrir al-Sham group is “preparing another provocation of the “use of chemical weapons” by Syrian government forces against the peaceful population of the Idlib province.” He said the group has delivered “eight chlorine tanks” to Jisr al-Shughur to “stage” the attack, and that the tanks were later taken to a village eight kilometers (5 miles) away. He also said that British services are also allegedly “actively involved” in the upcoming “provocation.” Konashenkov’s statement also added that a group of militants “trained in handling poisonous substances under the supervision of specialists from the private British military company Oliva” arrived in Jisr al-Shughur. British officials have denied any such involvement.

The chlorine tanks were reportedly delivered by White Helmets members. Members of the controversial “rescue group” were also behind the reports of a chemical attack in April 2018. The reports resulted in an airstrike by US and allies.

The Russian Ministry of Defense has warned of the possible staged chemical attack as early as August 25th. Prior to that U.S. National Security Adviser John Bolton warned Syria’s government against using chemical weapons and vowed a tough response if that happens.

OK now Trump wants to assassinate the countries’ leaderships that is why US and European secretly have entered into Middle East and taking country by country.

Turkey, Iran, Pakistan, China and Russia should have to send their army forces and their military hardware to Syria and rescue it from US, UK and Israeli global terrorism. United they can stand but individualy they will be fall. See what US, UK and Israeli migrants have done to many countries in the world. Next could be your country.

It is obvious the russians chose to overlook the fact that the accusations about Syria using chemical weapons is just a side way to say Russia does. When none exist to apply and enforce the laws of the land, in this case international common sense law, then the world is in a form of anarchy that each does what ever he think it can get away with. Which in general describes reality of today.

I wouldn’t be surprised if a false flag CW attack with a massive FUKUS missile attack as cover for targeting Assad, although he would probably be protected by Russian air defences.

the retaliation that the allies will respond with, if Assad is assassinated, will be beyond what you could imagine. If no retaliation comes, it mean any opposing nation leader will be open season game. Who will be next? Putin? Xi Jinping? But then again we are talking, of homicidal schizophrenic people, so all is possible.

I still don’t see the point of concocting a fake chemical attack followed by yet another round of FUKUS cruise missiles being intercepted and jammed of course by the Syrians and Russians. What good is a single strike of 100, even 200 cruise missiles going to accomplish to change the situation on the ground? You’d need a sustained air campaign for that that would last for months at a time, several times larger then the Russians deployed at their prime.

That being said I have no doubt that it will happen because FUKUS seems to be run by idiots. And idiots will do idiotic things.

not idiots…. but powerless employees, that have absolute no choice than follow their orders.

But someone has to give them orders.

And they can order me anything they want, if they ordered me to go into Idlib to organize this I’d resign on the spot. There’s no way in Hell I’d go into a place where I, a westerner, would end up either dead, or as a hostage, a prize to be traded or exchanged for more cash and prizes.

That is you not them. It is very wrong to judge an event based on what we want to happen or theoretically what would have done if we was in their shoes. Thinking about it no matter what you saying now that have absolutely nothing to lose if you was one of them I am sure you do exactly what they doing as ordered.

Perhaps Washington feels the need to further demonise Assad because they fear with him winning the war that they’ll come out of this looking like the bad guys? Possibly the public are becoming increasingly aware of just who the US has been backing in this dirty war?

Trump also said that about Stoltenberg Nato. “If Stoltenberg dont raises Europes Nato contribution to 5%, kill him”. Thats why all European countries prefer Obamba and Clintoris.

This article really displays the duplicity that exists in Washington. All these denials are humorous. Then to quote Haley as someone to believe, my god…liar extraodinaire. Wait until they leave the admin, then the truth comes out. Remember Trump’s BFF Bannon, how Trump was all it…until he was kicked out, then Trump was crazy, off the rails. Seems to be a pattern here. For sure the first casualty of the Trump admin is honesty and truth…not to mention sanity. Those that jumped on the Trump bandwagon need to realize they were played. How long did it take Trump to ditch everyone that helped get him elected and install neocons in their places? How long did it take to renege on every position he ran on? His so-called desire for ‘friendship’ with Russia sure changed real quick to ‘Russia enables CW attacks’. I have to wonder if he and Erdo are related. Let’s see…megalomania, check…liars, check…supports terrorists, check…backstabs ‘allies’, check…duplicitous, check…rants and raves like 6 y/o, check. The similarities are likely endless.

You are a Retarded Clown Trumpster… 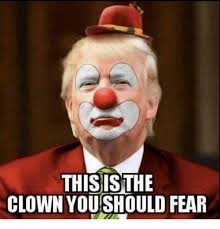 Russia Bomb their Headchoppers & Intelligence to Hell…Mo’ Bodybagsss… Sorry Mrs. Smith we had to return your Son in a Closed Coffin… ‘cause he looked like Shit….

Trump speaking out of both sides of his mouth. Sounds like every other lying US politician.
Where’s the affordable quality health care Donnie? Do something productive for a change.

Okay so Assad launches a CW attack so we launch a hundred missiles to destroy their stuff, blaming Bashar for wanting to kill his own people, while killing some of those same people with our missiles.

Yet when Trump is accused of ordering his assassination, to me a legitimate order IF Assad is guilty, they all go into denial mode. So the butcher can live, but we keep spitting missiles in there to kill his people, who he is not allowed to kill. To rescue his people we should kill him, but no, hell no, we did not order his assassination. Kennedy’s, yeah but not Assad.

I figured it out, oh man sometimes. Yeah anyway, if we kill all the Syrian people except Assad, then Assad won’t be able to kill them, mission accomplished, medals all around. On to the next country on our list. Iran.

Hey that’s kind of what happened at Waco.