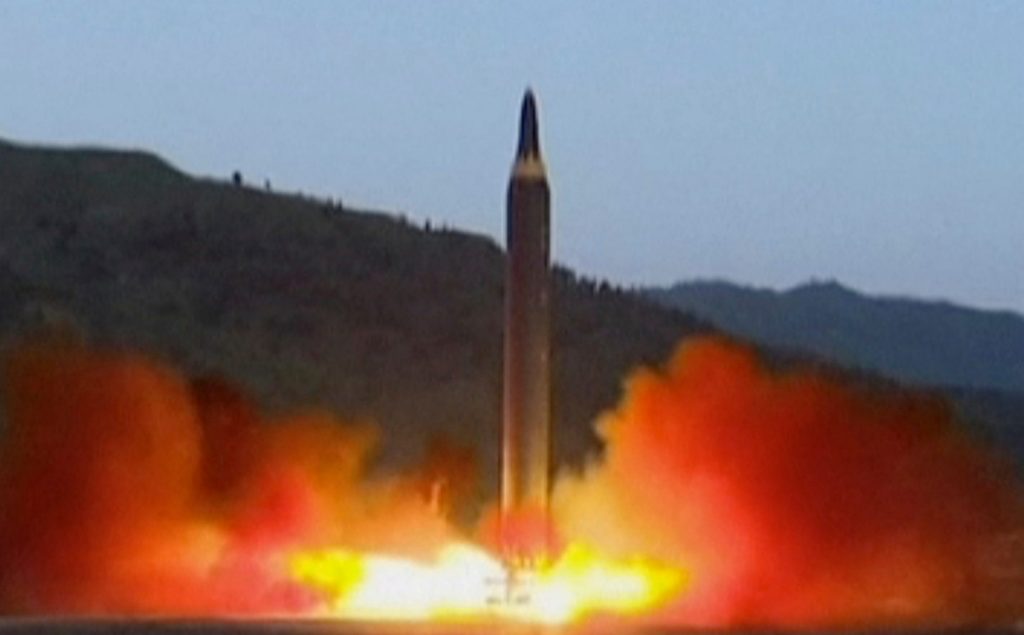 The launch of the Hwasong-12 missile at an undisclosed location in North Korea in May CREDIT: AP

On Tuesday morning, North Korea conducted another missile test firing an alleged intermediate-range ballistic missile Hwasong-12 in the direction of Japan. The missile flew over Hokkaido and landed in about 1,180km east of the island in the Pacific. 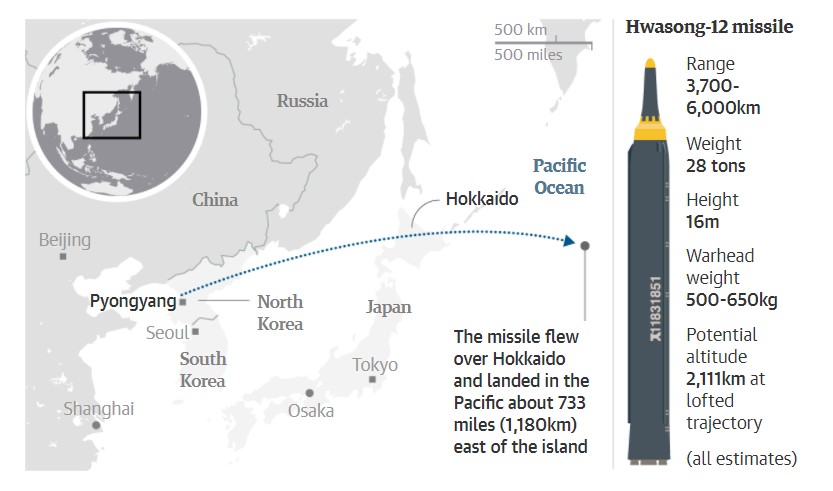 Following the missile launch, US President Donald Trump once again warned that “all options are on the table” to solve the issue.

“The world has received North Korea’s latest message loud and clear,” President Trum said in a statement. “This regime has signaled its contempt for its neighbors, for all members of the United Nations, and for minimum standards of acceptable international behavior.”

“This regime has signal(l )ed ‘sic’ its contempt for its neighbo(u)rs ‘sic’, for all members of the United Nations, and for minimum standards of acceptable international behavio(u)r.” ‘sic’

This ‘ behaviour ‘ in fact better describes the actions of the United States of America.

Americans are speaking US English, so it’s correct to write “signaled” and “behavior”. They are spelt differently in UK English.

The Queens English is the real standard :)

Not all options are on the table. For example the option of actually leaving North Korea alone and stopping all aggression against it and stopping the occupation of South Korea and getting the fuck out of the entire region and back into their own territory. This is one option that is off the table.

Except …. PEACE is not an Option for U$ Americans and never has been …. ask the First Nations

So Trump lied… that is kinda par for the course for an American president these days.

south korea is not occupied. if the koreans want, american troops leave. but soth kora will have there americans.

You wish! SK’s DO want the American troops OUT! They have not wanted the USA forces around since th 50s when they stuck their big fucking noses into Korea’s problems. Just like Viet Nam, just like any foreign “war” the USA has fought, they should never have been there and they SHOULD leave. I agree– the option of staying out of the DPNK’s business has never been an option. So all options are NOT on the table

Trump is blithering his idiocy again and that’s news. Can’t we just ignore these cünts?

Like Trump? Because the DPNK has never bothered anyone, and it is the one being sanctioned by the UN. What a bunch of spineless idiots occupy THAT body

you are laughing on your stupidities?

Trump doesn’t seem to be the only blithering idiot in the US , outgoing Ambassador John Tefft to Russia had an interview of 60 minutes long on Russian radio that was very insightful to the mad men that are in power in the US.

This is after the US has tested another first strike weapon , the US government will be forcing Trump to use this new neutron bomb and to continue his mad rantings.

Damn right; they’re all idiots. Psychopaths as well. But in the end they are all simply puppets of their true masters, “Israel”

the time is shortening, the winter is coming …

But how big is this table? I need one for my Sunday barbecues. where to buy?