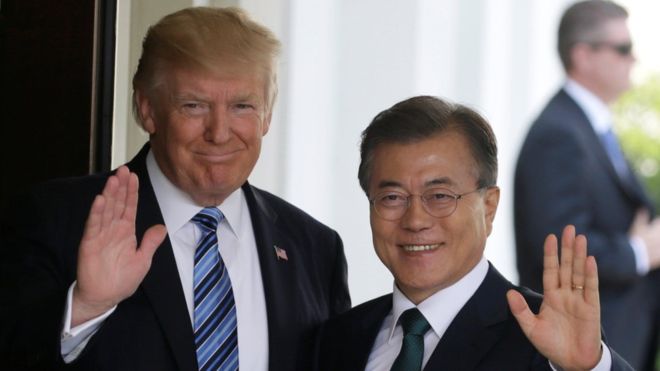 On May 22, US President Donald Trump is meeting South Korean President Moon Jae-in in the White House to talk about the difficult situation over North Korea issue ahead of the expected June 12 summit between the leaders of the US and North Korea.

Further steps of South Korea towards the issue also depend on the outcome of the North Korean-US summit. According to the joint declaration signed between North and South Koreas on April 27, both countries are to push forward peace and denuclearization of the Korean peninsula.

On May 21, in an interview to Fox News TV channel US Vice President Mike Pence said the US President Donald Trump could withdraw from the June 12 summit with North Korean Supreme Leader Kim Jong Un.

Pence stressed that North Korea should not attempt to demand concessions from the US for promises it was not going to keep.

“It would be a great mistake for Kim Jong Un to think he could play Donald Trump,” Pence said. “President has made clear we will not tolerate North Korea possessing nuclear weapons.”

On May 20, quoting Trump’s administration The New York Times reported that Trump is becoming worried about the upcoming US-North Korea summit in Singapore. According to the report, the US President said that the meeting “could turn into a political embarrassment” if the talks over the dismantlement of the North Korea nuclear weapons fall apart. The New York Times pointed out that the Pyongyang claim to reconsider the participation in summit caused Trump’s “surprise and anger”.

On May 16, North Korea threatened to call off the Pyongyang-Washington summit, stressing that the US envisage only unilateral denuclearization without guarantees.

On May 15, Pyongyang cancelled the May 16 North-South Korean talks “in light of the provocative military” exercises between the South Korea and the US.

On May 22, the Arleigh Burke-class guided missile-destroyer USS Milius (DDG 69) arrived at the US Fleet Activities (FLEACT) in Yokosuka, Japan “to become part of the Forward Deployed Naval Forces (FDNF) in Japan”, according to the US Navy report.

The arrival of the warship to Japan three weeks ahead of the US-North Korea summit demonstrates that Washington is not going to reduce its military activity in the region regardless any peaceful allegations.

America wants hostilities between NK and SK to be permanent, so the US can threaten Russia and China with troops and nukes near their borders. The US will never willingly allow peaceful coexistence between the 2 Korea’s, and reunification would only be allowed if the USA assumed control over the reunited Korea.

i would have agreed with u but since Trump has been elected, i am betting on re-unification of North and South Korea (slowly over time)! This would give the US and even greater strategic advantage as NK shares a border with Russia and China! We will see what happens after June 12! Im pretty sure NK doesnt have any nuclear warheads or scientists anymore! They were all killed in the last 6 months!