Yesterday, the WSJ reported that the Trump administration is planning to begin a probe of what the U.S. sees as violations of intellectual property by China. Against a backdrop of Trump’s frustrations with domestic policy, sliding approval ratings and disagreement with China over North Korea, the chances of protectionist action are rising, as is the probability of a “hot”, retaliatory trade war. This morning ow learn when Trump is set to fire the first shot. Reuters reports, citing White House officials, that President Trump is expected to make a speech and sign a memorandum at the White House on tomorrow, Friday, that will target China’s intellectual property and trade practices, effectively firing the first shot in what could escalate into a major US-China trade war.

This will be the opening salvo to several months of trade actions, and is expected to be followed by actions on steel and aluminum dumping — which could include tariffs and quotas — and subsequent measures to protect services, and comes at a time when Trump has become increasingly frustrated with the level of support from Beijing to pressure Pyongyang to give up its nuclear and missile program.

Trump has said in the past that China would get better treatment on trade with the United States if it acted more forcefully against Pyongyang. Beijing has said its influence on North Korea is limited. China has countered that trade between the two nations benefits both sides, and that Beijing is willing to improve trade ties. A senior Chinese official said on Monday there was no link between North Korea’s nuclear program and China-U.S. trade.

As Axios adds, administration officials say Trump is doing this because of complaints he’s heard from Silicon Valley executives saying Chinese IP theft is one of their biggest challenges. Allegedly, Peter Thiel has been involved in crafting this new step.

In a rare show of bipartisanship, on Wednesday three top Democratic senators urged the president to stand up to Beijing, perhaps in hopes of further deteriorating the US economy and thus shortening Trump’s tenure even more. Senate Democratic leader Chuck Schumer pressed the Republican president to skip the investigation and go straight to trade action against China.

“We should certainly go after them,” said Schumer in a statement. Senators Ron Wyden of Oregon and Sherrod Brown of Ohio also urged Trump to rein in China.

That’s all Trump needed to hear.

So what happens next? About a week after Trump’s announcement, the U.S. Trade Representative, Robert Lighthizer, is expected to announce that he’s initiating an investigation into unfair Chinese trade practices — using a rarely-used tool, section 301 of the Trade Act of 1974. The investigation paves the path to the U.S. taking potentially aggressive retaliatory actions against China such as tariffs on Chinese imports or rescinding licenses for Chinese companies wanting to do business in the U.S.

U.S. Section 301 investigations have not led to trade sanctions since the WTO was launched in 1995. In the 1980s, Section 301 tariffs were levied against Japanese motorcycles, steel and other products. “This could merely be leverage for bilateral negotiations,” James Bacchus, a former WTO chief judge and USTR official, said of a China intellectual property probe.

To be sure, Chinese IP theft is nothing new, and has long been an issue for major US tech companies like Microsoft and prior administrations. It’s also a major issue for agriculture and manufacturing – and any sector that has proprietary information related to their production practices. However, in the past, U.S. administrations and companies have been wary about publicly confronting the Chinese government, preferring to do things behind closed doors and in a more diplomatic approach.

Meanwhile, China denied all accusations. Ministry of Commerce spokesman Gao Feng said Thursday that China pays “high attention” to intellectual property and wants to maintain good cooperation with the U.S, Bloomberg reported. Still, China has for some time had countervailing measures at the ready in case a trade spat erupts, including legal constraints on foreign companies and import curbs on specific sectors.

And just to make sure that Beijing’s position on trade war is loud and lear, China state media signaled the nation would hit back against any trade measures, as it has done in past episodes. This time around, the need to project strength domestically is compounded by the looming twice-a-decade leadership reshuffle that may further entrench President Xi Jinping’s power.

Chinese officials have mulled stemming U.S. imports should retaliation be necessary. Under a draft plan, soybeans have been singled out as the top product that can be dialed back, according to people familiar with the matter. Autos, aircraft and rare-earth commodities have also been identified as potential categories for restriction, the people said.

Still, Trump’s offensive comes at a very sensitive time for Beijing: just weeks ahead of the 19th Party Congress, when Xi Jinping wants everything in his economy to be perfect.

“Ahead of the 19th Party Congress, the last thing that China will want is a trade war,” said Callum Henderson, a managing director for Asia-Pacific at Eurasia Group in Singapore. “It is also important that Beijing does not look weak in this context. As such, expect a cautious, proportional response.”

Of course, ultimately the big question – as Bloomberg puts it – is whether the Trump administration is willing to risk a trade war as it ups the ante. The International Monetary Fund warned last month that “inward-looking” policies could derail a global recovery that has so far been resilient to raising tensions over trade. The problem, for both the US and China, is that as Trump gets increasingly more focused on distracting from his numerous domestic scandals, he is likely to take ever more drastic action in the foreign arena, whether that means “hot war” with North Korea, or trade war with China.

“So far, it’s all been posturing, with little action,”’ said Scott Kennedy, a U.S.-China expert at the Center for Strategic and International Studies in Washington. “Pressure is building to do something, so the U.S. doesn’t look like a complete paper tiger.”

Finally, as discussed last night, a quick analysis of US winners (few) and losers (many) from any US-China trade war, reveals that most adversely impacted would be the states of Mississippi, Georgia, Illinois and  California, all of which maintain deficits at more than 3% of GDP. 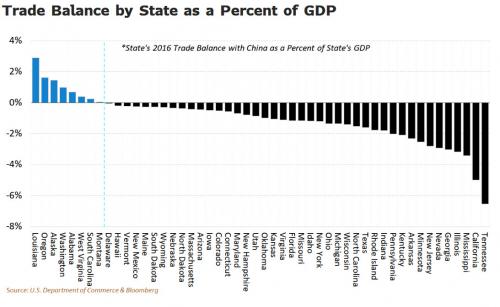 “TRUMP TO LAUNCH TRADE WAR WITH CHINA ON FRIDAY”.

I wonder what he is going to do on Saturday :)

The best thing the US could do to avoid being seen as a Paper Tiger would be to Stop Roaring.

China is playing the USA game. But USA doesn’t like others to play their game. “Do what I say but not what I do”.

USA wants free market just when they know they have advantages. Otherwise, they become communist and protectionist.

If USA wants to play the war trade game, USA will fail.

In a trade war between US and China, China is positioned better to inflict pain and discomfort …than US is. Most consumer goods at major retailer outlets in the US are made in China. Clothes, shoes, electronics, computers, toys…..etc. sold in the US are made in China, a trade war affecting the flow of these products will leave major retailers with empty shelves; Remember, greedy Wall Street outsourced all these industries from US to China 2-4 decades ago, their shortsighted goals for quick profit will make US vulnerable economically, if they rock the boat and try to sanction China economically for alleged improprieties.

can always make it somewhere else! Vietnam!

But if the Chinese back their government, good luck to Apple and others. Vietnam may be good alternative for labor, but seriously, how many consumers in Vietnam vs China?

And like there are no christians, no muslims no jews in China, China is a very safe state. You can’t infiltrate China.

They actually do have a problem with Muslims there, but it’s mostly restricted to their remote northwest desert region of Xinjiang – so far anyway…

Boring! Don’t waste web page real estate on shit Meme’s. If you’re gonna post a meme…. make it a good one! Nobody has “up ranked” it meaning, YOU ARE FUCKING SHIT! God damn amateurs around here!

Personally I don’t like using profanity so I am going to take it down isn’t really my liking, besides not many read articles that are tedious like this one .

Now I feel bad about what I said! I will delete my comment also! Cheers!