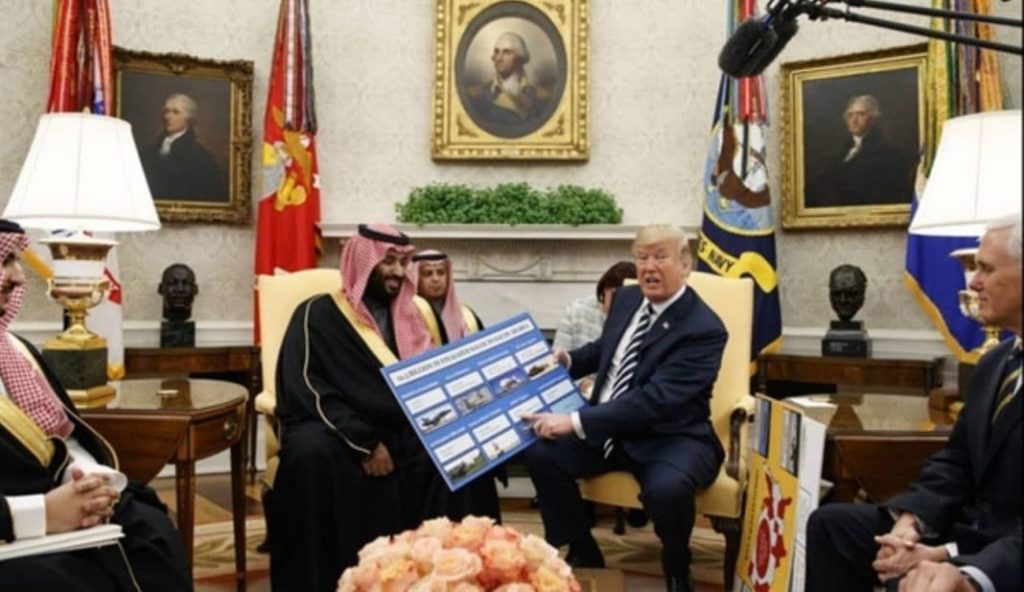 The world is yet to respond to Saudi Arabia’s Crown Prince Mohammed bin Salman who keeps telling us that Riyadh will pursue a nuclear weapon if its regional rival Iran obtains one, a stance that has been stated more frequently at a time when the whole world has verified that Tehran’s nuclear program is exclusively meant for peaceful purposes.

Unfortunately, his comment is yet to raise concerns at the International Atomic Energy Agency or the UN Security Council about nuclear proliferation at a time when the Saudis are seeking foreign technology for their nuclear energy program, including from the United States. It also comes at a time when President Donald Trump has scrapped the nuclear deal between Iran and the permanent members of the Security Council plus Germany.

Saudi Arabia has plans to build 16 nuclear power reactors within 25 years, according to the World Nuclear Association. The cost of the projects could reach $80 billion, a huge opportunity for the companies that build and operate nuclear plants. Perhaps, that’s why Trump the consummate has said nothing yet. Whatever this is, the Trump administration cannot be allowed to pursue that business, even if this could bolster the bankrupt nuclear construction industry in the US:

Concerns have surfaced that Trump plans to relax restrictions on enrichment activities that the US typically places on countries that receive US nuclear technology and training. The measures, enshrined in so-called 123 agreements, are said to aim to prevent uranium enrichment or plutonium reprocessing geared toward developing nuclear weapons. The argument is that Saudi Arabia can simply use its money and lobby for relatively unfettered access to nuclear technology.

To substantiate, Senator Edward Markey says, “Saudi Arabia’s crown prince has confirmed what many have long suspected — nuclear energy in Saudi Arabia is about more than just electrical power, it’s about geopolitical power. The United States must not compromise on non-proliferation standards in any 123 agreement it concludes with Saudi Arabia.”

The issue isn’t whether it’s fair for the US to constrain the Saudis, or whether there is an opportunity to revive US nuclear manufacturing, or to thwart Russian and Chinese influence in the Middle East. It’s that giving Riyadh a pass on tight nuclear non-proliferation rules would be playing with fire. Moreover, despite its denials, Saudi Arabia’s resistance to restrictions on uranium enrichment and plutonium extraction amounts to a public declaration that the Wahhabi regime wants to keep a nuclear weapons option open. This is certainly the way the world sees it. The UN Security Council and the IAEA shouldn’t condone it. The Saudi regime cannot and should not be allowed to have access to nuclear technology, including enrichment and reprocessing.

Indeed, the Saudi regime’s past and current behaviour in the region provides ample reason for the international community to insist on strict rules for non-proliferation. It was Riyadh, remember, that funded the development of Pakistan’s nuclear arsenal. The IAEA should demand nothing less than what is seen as the no-proliferation gold standard for any agreement between the US and Saudi Arabia: no uranium enrichment and no extraction of plutonium.

The Saudis also possess the missiles needed to deliver nuclear weapons, should they ever acquire them. They have bought long-range DF-3 “East Wind” missiles — that are designed to carry nuclear weapons — without informing the United States or the IAEA. Then, 10 years ago, they bought newer nuclear-capable missiles. They designated the Royal Saudi Strategic Missile Force as one of the five branches of the Royal Saudi Arabian Armed Forces, responsible for commissioning long-range missiles. What is often left unsaid is that these missiles only make sense if armed with nuclear weapons.

Long story short, Saudi Arabia is neither a stable state nor a benign actor in the Middle East that deserves Western coddling – much less nuclear weapons. The US government portrays Saudi Arabia as a partner in the fight against terrorism and extremism, but the truth is that the Saudis have been the main purveyors of the Wahhabi doctrines that have spread the seeds of terrorism throughout the Arab world.

But the most important reason for caution about any nuclear deal with Saudi Arabia is that it is unlikely to survive for long in its current form, because Saudi Arabia’s ruling family is remarkably unstable. An absolutist monarchy that represses minorities, chops off heads of political opponents, and lacks a codified system of law is out of step with 21st-century reality. It rests on a shaky foundation.

Mind you, Crown Prince Salman has also been missing for a month now and no one knows anything about his whereabouts or his fate after a shooting incident. Maybe he’s dead, maybe not. Whatever happens to him, the Trump White House should never be allowed to nuclearize the greatest sectarian agitator in the world, a despotic regime that openly seeks to acquire sensitive uranium enrichment or plutonium separation technology which can be used to produce nuclear weapons and threaten the entire planet.

Saudi Arabia with nuclear weapons would be like giving a chimpanzee a loaded shotgun and it must never be allowed to happen. Saudi Arabia should be invaded by a global coalition and a new secular regime installed that will permanently revoke all forms of terrorism, both by state as well as proxy Islamist forces in neighboring countries. All religious ulemas should be closed down and the rights of Saudi minorities respected and guaranteed.

as
Reply to  Ariel Cohen

If they get one they’ll most likely owned it in name only and the operators would still be that of US or it’s vassals on pays.

I agree fully, but I think there’s no need for an invasion. Without the support from the US, UK and their partners in crime, Saudi regime as it is today will cease to exist in less than 3 months. I agree that it will be very dangerous though, as the Arabian peninsula population (doesn’t matter which country, maybe except Yemen, maybe) aren’t politically aware to recognize the dangers in the path to freedom. It’s not their fault as they never had anything remotely like an election even for a city council.

It’s extremely important that the people of the countries which support these barbarians recognize this fact and pressure their governments by any means possible (writing articles, making this support visible, demonstrations, petitions, forcing their representatives, etc.): Without their governments’ support of Saudis, the world will be a much safer and better place.

Maybe some day their citizens will be able to use the god-given riches to their own well-being, instead of turning it into a horror that burns the ME and inevitably, the rest of the world. This terror WILL find it’s way into the supporter countries too.

Sa will never have nukes.

Lets go to another article.

SA ALREADY HAS NUKES dimwit – They paid for the Paki Nuke program decades ago – for what? For nothing? – They have as many as they need.

save me befor your bullshits

Monkeyrabia, can’t produce anything themselves.

Well not entirely true they can produce a lot of money that the US/NATO countries will take from them.

Far as America is concerned – ANYTHING for money.

The only way they can have a nuke is by buying it, these camel brain robed wahhabi apes can’t make or manufacture anything.

True, but these shitbirds A) did 9/11 B) had Bush and Obongo destroy their enemies using 9/11 as an excuse.

The Saudis did 911? then you’re a bigger Shitbrain

The saudi goal is two fold: wipe out the shias(like in iran), and gain tighter control of the oil market…

This is the state that sponsored the 9/11 attacks, and all the other Sunni terrorism that has targeted the West.

This is the greatest ally of the terror state of Israel.

They must not be allowed to have nuclear weapons. For the Saudis, all that they deserve is DEATH.

No nuke for Iran, that is only on defensive posture, and approval for criminal Saudi Arabia, supporting terrorists groups such as ISIS, and illegal war against Yemen? Here is in front of our eyes a typical perverse pattern. As simple reminder, perversion is a kind of disease I invite each of you to investigate. The only problem is that the final victim might be the whole world, cause every time a persecutor is declare “Good” and a victim “Evil”, every country in the world is in potential danger.