US President Donald Trump said that he does not think Saudi Arabia betrayed him on the issue of the murder of Jamal Khashoggi, according to the Kingdom’s Al Arabiya outlet.

Since the disappearance of the journalist on October 2nd, the Trump administration’s stance has changed numerous times. One thing has remained a constant – that security support for Saudi Arabia would continue and there would be no sanctions regarding arms sales.

Prior to Saudi Arabia admitting that Khashoggi was dead, Trump and his aides had the softest stance on Crown Prince Mohammed bin Salman and his country. While other countries were demanding a thorough investigation and threatening various actions, Trump’s rhetoric was that the Kingdom shouldn’t be accused without evidence.

Trump still claimed that there “should be” serious repercussions if it turns out that Saudi Arabia did, in fact, kill Khashoggi.

After the October 19th admittance that the journalist died in a fight in the consulate and that it was a rogue operation that ended up killing him, Trump was the first one to express his support for the version. Despite the explanation being questionable and countries such as Germany, France and the UK calling for the provision of evidence, Trump and his aides stood by Saudi Arabia, claiming that the story “made sense.”

US intelligence also refused the Saudi story, saying that Khashoggi was most likely was assassinated on high-level orders from the Saudi royal court. Trump disregarded that and still refused to point his finger at the Crown Prince.

The US President also said he was pleased with how Saudi Arabia handled the situation. The Saudi government had detained 18 people in connection to the killing.

The story Trump so vehemently defended turned out to be false. On October 25th, Attorney General Shaikh Suood bin Abdullah Al Mo’jab admitted that Khashoggi’s murder was premeditated and was not a result of a “fight gone wrong,” as the Kingdom initially announced.

However, it does appear that even the US support isn’t endless, or rather it cannot shield the Kingdom from every questionable conduct.

On October 31st, Secretary of Defense Jim Mattis called for a swift cessation of hostilities in Yemen. He called for all parties to take part in the UN-led peace talks within the next 30 days and establish a ceasefire.

“Thirty days from now we want to see everybody around a peace table based on a ceasefire, based on a pullback from the border and then based on ceasing dropping of bombs that will permit the (UN) special envoy, Martin Griffiths – he’s very good, he knows what he’s doing – to get them together in Sweden and end this war,” Mattis said.

Meanwhile, Secretary of State Mike Pompeo urged the Saudi-led coalition to end its air strikes on populated areas. “The United States calls on all parties to support UN Special Envoy Martin Griffiths in finding a peaceful solution to the conflict in Yemen. Substantive consultations under the UN Special Envoy must commence this November in a third country,” he said.

In August in precisely such an airstrike a Saudi jet struck a school bus, killing 40 children. From the debris it was discovered that the rocket was supplied by US.

“The time is now for the cessation of hostilities, including missile and UAV strikes from Houthi-controlled areas into the Kingdom of Saudi Arabia and the United Arab Emirates. Subsequently, Coalition air strikes must cease on all populated areas in Yemen,” Pompeo said, not missing the chance to also shift the blame on the Yemeni side.

It appears that the Khashoggi controversy was the tipping point which forced the US to make at least a formal statement to show its willingness to put an end to the Yemen conflict. The Trump administration has been criticized by activists and numerous members of Congress for its support of the Saudi-led coalition in Yemen. What caused further criticism was Pompeo and Mattis’ statement that the coalition was doing enough to avoid civilian casualties and expressing their support back in September.

Other actions related to Saudi Arabia included the sanctioning of 21 Saudi natives, who had their visas revoked or will not be granted renewed visas, as well as US Treasury Secretary Steven Mnuchin who refused to attend an investor’s conference in Riyadh held on October 23rd. He, however, went to Saudi Arabia and met with the Crown Prince to express US support in their time of crisis.

Trump is being pressured both Republic and Democrat members of Congress to assume a harder stance on the Kingdom.

Five Republican senators asked the Trump administration to halt talks with Saudi Arabia aimed at supplying the kingdom with U.S. nuclear technology. The Trump administration has courted the Saudis as they seek to build 16 nuclear power reactors over the next 25 years, an endeavor that would generate tens of billions of dollars in economic activity.

“The ongoing revelations about the murder of Saudi journalist Jamal Khashoggi, as well as certain Saudi actions related to Yemen and Lebanon, have raised further serious concerns about the transparency, accountability, and judgment of current decisionmakers in Saudi Arabia,” the lawmakers wrote. “We therefore request that you suspend any related negotiations for a U.S.-Saudi civil nuclear agreement for the foreseeable future.”

Trump said that he hopes Congress would not pressure him to go against $110 billion worth of arms sales that would allegedly create hundreds of thousands of workplaces in the US.

So far, it appears that the Trump administration’s support for the Kingdom is endless. Despite pressure to find a peaceful solution in Yemen is a significant progress, it would still allow for the US to somewhat cover the Khashoggi scandal and for both the US and Saudi Arabia safe face. This is also positive for the Saudis, as their intervention sees no hope of a victory, despite the billions spent on weapons, this way they can save face, by “giving in” to a peaceful resolution mediated by the UN and brokered by the US.

>>While other countries were demanding a thorough investigation and threatening various actions, Trump’s rhetoric was that the Kingdom shouldn’t be accused without evidence.

That of course is only reserved for countries that America deems as enemies, like Syria. Then its cruise missiles away before the ink of the newspaper has time to dry.

Actually that was Russia’s stance and it was a wise move.

Deleted again. All these double negatives.

Yeah wtf i got your reply in my email but not here.
I agree with your assesment…this is starting to look like a smoke screen to hide the fact that the so called coalition got its ass kicked and to hide their war crimes on the civilians.

The houthis must keep the pressure on at this critical juncture…well done boys, your sacrifice is not in vain!!!

Mr. Tiny strikes again. So naive or too much in love with Saudi $$$?

Hmm, doesn’t take great mind to think it over :D 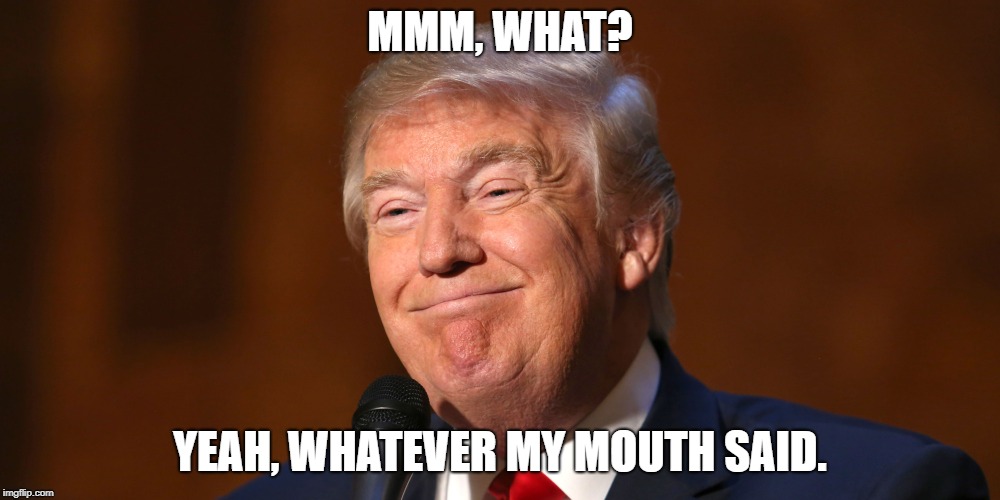 If Trump had taken the oil like he promised, the Saudis would have no economic leverage whatsoever.