US President Donald Trump is going to introduce a 20 percent tax on goods, imported from Mexico, in order to get funds for construction of a wall on the Mexican border. 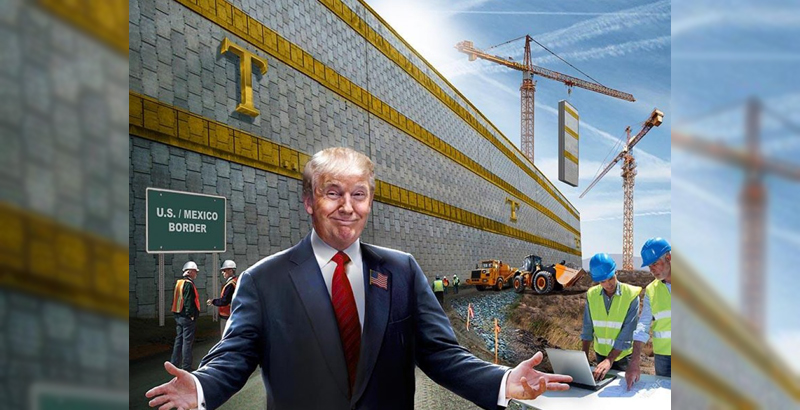 US President Donald Trump has found a source of funds for construction of a wall on the border with Mexico. The ambitious idea is assumed to be financed by introduction of a 20 percent tax on goods, imported from Mexico. Construction of the wall is one of the main election promises of Trump.

“When you look at the plan that’s taking shape now, using comprehensive tax reform as a means to tax imports from countries that we have a trade deficit from, like Mexico, if you tax that $50 billion at 20 percent of imports,” press secretary of the White House Sean Spicer said, discussing the tax with reporters on his way back from Philadelphia, where Trump spoke to both houses of Congress. “By doing that we can do $10 billion a year and easily pay for the wall just through that mechanism alone.”

Spicer explained that the wall would save money by reducing the expenses, needed for border enforcement, and slowing down illegal immigration. When he was asked if American consumers would suffer as a result of such a tax, Spicer said that the economy would adjust.

Afterwards, Spicer clarified that he was only offering a proposal.

“We’ve been asked over and over again ‘how could you possibly do this, there’s no way that Mexico will pay for it,’” he said. “Here’s one way. Boom. Done.”

The idea on financing of the wall’s construction has already been transferred to the Congress, where a detailed action plan will be prepared. The decree on construction of the wall on the Mexican border was signed by Trump on January 25. After that, Mexican President Enrique Peña Nieto announced that his country would not pay for the construction.

In response, Trump wrote on his Twitter that in this case it is better to cancel a meeting, scheduled for January 31. As a result, Nieto refused to come to Washington. During a meeting of the Republican Party’s leadership in Philadelphia, Trump said that the meeting will take place only if Mexico changes its attitude towards the US.

Excellent! A 20% tariff could reinvigorate American agriculture and industry. I hope he follows through and enforces it!

You do know that America exports agricultural products to Mexico? The reason why Mexican farmers had to go to US was that those US exports were cheaper then Mexican farmers could produce? Its always the same – you people don’t know anything. You like to work on a farm in USA for small money? Right!

Perhaps millions of jobless Americans can be used for the same jobs with same salaries eh?

I really doubt millenials are willing to work on the farm, problem is people were teached that everyone would get a nice little bureacratic job on a office with air conditioned, and a huge paycheck with no real commitment to the real economy (production), I really think this is the root of all economic troubles we face in the western world.

My bad, english isn’t my first language, sometimes I make mistakes on the conjugation of irregular verbs.

Sorry DC. I actually didn’t write it maliciously. Was just trying to help. You know more about than I do, I just speak it :)

Blah, blah… How many languages do you understand or speak? Right – in the land of the stupid Americans they don’t.

It’s been tried before in Oregon, Alabama, Georgia and other states. Time after time the same thing happens. Jobless Americans don’t last because it’s hard work and they quit or get fired. It’s easier to collect welfare or unemployment while sitting on their ass instead of making minimum wage bent over picking crops all day.

Part of it reads “Nevertheless, a variety of employers in Alabama said they have not been able to find enough legal residents to replace the seasoned Hispanic field pickers, drywall hangers, landscapers and poultry workers who fled the state. There was an initial rush of job applications, they said, but many new employees quit or were let go.”

and ““The whites lasted half a day, and the blacks wouldn’t come at all. The work was just too hot and hard for them,” Smith said. He dismissed the argument, often made by critics of illegal immigration, that Americans might do the work if offered a higher and hourly wage. “We’ve been using Mexicans for 30 years, and now they’ve been run off,” he said. “Everyone is worried about Arizona. If this law sticks, what’ll we do then?””

Yes, that are the roots of the problem:

1- Welfare. State should give welfare only to the very old, disabled or children.

2- An education system that promise wonders with no commitment with the economic reality.

Welfare : There is hardly any rich country where so many elderly have to work to make end meet.

Education : There is no rich country with such an expensive education system, where for most of lower and lower middle income classes higher education is either unaffordable or of lower quality.

Very true. Elderly have to make decisions between food and medicine and they shouldn’t have to. If they make too much money while on social security, they get penalized with a reduction of benefits! If they have to go to a retirement home and can’t afford it, the government sells their house to recoup the money. At the same time we have a military budget of 600 billion. That’s lunacy to me.

Did you understand my post? The problem isn’t welfare to the elderly, it is welfare to everyone, as I said the ones who should get welfare are the elderly, children, and disabled. Second, the problem is not education, it is poor education that give to people ilusions instead of qualifications.

Welfare is given widely to Israel.

I guess the pissed off masses will get you out of your cozy livelihood?

…plus exports to Mexico too!

He will get around NAFTA by citing Mx border control laxity compensation.

I hope Trump get out of NAFTA and increase this tax to 50%. in this way México will turn its view to China, India and Russia. I propose mexican stop right now drinking Coca-Cola, Pepsi-Cola, Ciel water, and e-pura water.

I hope we got rid of American influence everywhere. Pack your things and stay fenced in on your stolen land.

Reading the comments, it seems to me that a lot of americans are complaining about illegal immigration , thinking that americans could take agriculture jobs.

Furthermore, they are complaining about an export surplus of Mexico towards he US.

There are several other factors not taken into account :

1. The attitude of the US towards Mexico is neo colonial. You do not treat a friend this way. If adaptions in Nafta are necessary, negotiate in good faith.

2. American surplus in services, profits and dividends are not taken into account. Will Mexico now tax these at 20% extra?

3. Westerners harvesting? Will not work, we tried in the Netherlands too. Westerners will only do manual harvesting when they are small farmers, not as day laborers. Solution might be legal parttime immigration, say six months a year. The US could also return to smaller scale farming or mechanizing harvesting, which is to some extent possible.

4. Import duties will only put additional costs on the table for US companies. In case of reduction of imports, there will be additional pressure for emigration to the US.

When we started a business in US we first used local American workers. Did not work, those people are ignorant, uneducated and none productive. I’m always amazed how smart people from Mexico, Latin America, Asia are – we have a mechanic from the Philippines – that guy is honest and does magic. Americans are dumb! Americans are so dumb that they like to wear uniforms and murderer innocent people abroad. Go home Ami!

I’m white European and I don’t have any problems with people from Mexico! I actually employ those people for better wages than I would give to lazy and none performing Americans, who talk a lot and can’t do a thing.