US President Donald Trump said in an unscheduled news conference on July 12 that all NATO member states have agreed to increase their defense spending after he told them he was “extremely unhappy.”

“I told people that I’d be very unhappy if they didn’t up their financial commitments substantially,” Trump said. “I let them know that I was extremely unhappy with what was happening, and they have now substantially upped their commitment.”

If Trump’s remarks are true, NATO member states would increase their defense spending beyond 2% of their GDP.

“NATO is much stronger now than it was two days ago,” Trump announced.

However, Trump’s “spending victory” appeared to be untrue immediately.

According to AP, French President Emmanuel Macron denied that the NATO members had agreed to boost defense spending.

“There is a communique that was published yesterday. It’s very detailed,” Macroc said. “It confirms the goal of 2 percent by 2024. That’s all.”

Macron went further adding he does not believe it would be a good idea for NATO members to raise the defense spending to 4% of GDP from 2% as Trump suggested.

“Please buy more F-35s and Patriots, because I have a cylindrical object with a “LM” label stuck somewhere and it hurts”.

NATO countries increase their spending to 4% and follow Turkey’s example by buying Russian weapons, instead of Lockheed Martin’s ones.

Wonder what would happen next.

The USA is cynically plundering her NATO vassals with a Protection Racket when NATO has no national enemy on their borders :)

The main threat to NATO nations are the vast numbers of migrants who are interspersed with various terrorist groups. Both of these threats are totally due to the diabolical actions of NATO in faraway lands from NATO countries as we realise John.

I also wonder what will happen next :)

Not true my country has an enemy to the south along our borders as they have never ever been a good neighbor the feud between us goes back 300 years.

I wouldn’t put the facilitating actions of George Soros and other “philantropists” in second place among the causes.

I’m not even sure on what came first; what is sure is that the destruction of Europe and European values is prioritary for NATO.

The fact that most NATO countries are actually European, heavily indicates that most EU countries are governed by traitors, which routinely get phone calls from Soros associates remembering them which way to go.

I know that appearances are not everything but the NATO country ruling classes, elected and employed seem to have morphed into the adult persona of the weedy kids at school.

They appear to have no soul.

Unheard -of minority groups would appear who are being abused by the government of the country. America would then HAVE to bomb that country due to its self-given “duty to protect”. You know the rest… it is on the news every day. Yugoslavia ,Syria,Libya and Iraq!

If that were the case US wouldn’t be a safe area to be in the natives are still crapped upon there.

Haha good one! By unheard -of i meant fake;placed there by Uncle Sam. As for USA ,of course they crap on minorities;they took over the country by lying,cheating,killing and breaking treaties didn’t they?

As ever Trump is difficult to work with, but most NATO states have been neglecting their armed forces.

4% now? What the fuck? Not even at the height of the Cold War did any European country ever spend more then 3%, which was the then norm. And now we have to spend even more then that?

Trump is a liar, and his lies express his wishful thinking.
US MIC is trying to peddle it’s junk through Mafia tactics.

It would have been better if the NATO members had stood their ground and let NATO collapse. Instead, they scurry around after the fact trying to keep their overpaid positions in an enigma that has no reason to exist.

Trump just set up the perfect scenario for the other NATO members to exit. They could have put 100% of the blame of the failure on Trump.

Instead they offer to bleed their populations for more money to keep the beast alive. Does anyone know who paid for the brand new NATO building?

“You goddamn Europeans are starting to piss me off! All ZATO members WILL pay WHATEVER the hell percentage of your GDP the US demands to prepare for future attacks on enemies of the Jewish State. That means Russia and Iran. And we will sanction your asses off if you even think of buying oil or gas from them. Obey the USA or we will kill every last one of you and lay waste to your nations.”

[How was that, Bibi? I bet I scared them REALLY good this time. Those fuckers will pay up now!] 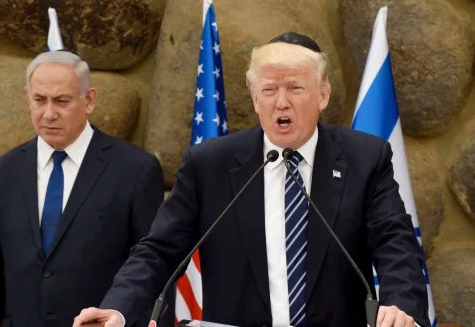