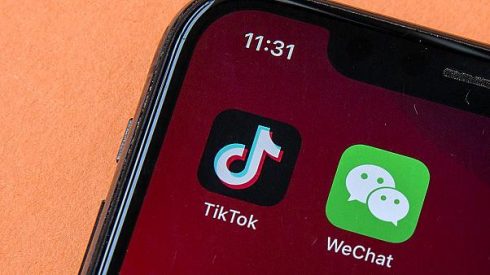 “TikTok, a video-sharing mobile application owned by the Chinese company ByteDance Ltd., has reportedly been downloaded over 175 million times in the United States and over one billion times globally.  TikTok automatically captures vast swaths of information from its users, including Internet and other network activity information such as location data and browsing and search histories.  This data collection threatens to allow the Chinese Communist Party access to Americans’ personal and proprietary information — potentially allowing China to track the locations of Federal employees and contractors, build dossiers of personal information for blackmail, and conduct corporate espionage,” the order said.

The reason for this was essentially that the spread of apps made by Chinese companies threatened US national security and rectifying actions to assist the “invisible hand of the market” were needed.

The second executive order Trump signed on the same day was aimed at WeChat.

“WeChat, a messaging, social media, and electronic payment application owned by the Chinese company Tencent Holdings Ltd., reportedly has over one billion users worldwide, including users in the United States.  Like TikTok, WeChat automatically captures vast swaths of information from its users.  This data collection threatens to allow the Chinese Communist Party access to Americans’ personal and proprietary information.  In addition, the application captures the personal and proprietary information of Chinese nationals visiting the United States, thereby allowing the Chinese Communist Party a mechanism for keeping tabs on Chinese citizens who may be enjoying the benefits of a free society for the first time in their lives.”

The executive order detailing the threat posed by TikTok notably bars transactions with ByteDance, not TikTok. This presumably opens up the possibility of TikTok continuing to operate under a US company such as Microsoft, which has been in talks about buying some or all of TikTok.

Trump notably wanted a share of the deal, which is also a ridiculous request.

The US is the second country to legislate against TikTok in recent months. India barred the app, along with over 50 other Chinese-made apps and games, in June.

India said it banned the apps for national security reasons following skirmishes between Chinese and Indian troops over disputed territory.

Reportedly, Australia also considered banning TiKTok but its prime minster said there was “no reason” to restrict the app “at this point.”

TikTok blasted the executive order in a blog post that accused the administration of acting in bad faith. The company also suggested it would take legal action to challenge the order.

“For nearly a year, we have sought to engage with the US government in good faith to provide a constructive solution to the concerns that have been expressed,” TikTok’s blog post reads. “What we encountered instead was that the administration paid no attention to facts, dictated terms of an agreement without going through standard legal processes, and tried to insert itself into negotiations between private businesses.”

The company maintains that it collaborates with the Chinese government to carry out any form of spying.

“With our success comes responsibility and accountability,” CEO Kevin Mayer wrote in a blog post last week. “The entire industry has received scrutiny, and rightly so. Yet, we have received even more scrutiny due to the company’s Chinese origins.”

After all, if China bans apps and websites, it is the work of a “totalitarian regime” that’s abusing its power over the people, it is needless protectionism, and “the invisible hand of the market” should be left to do its work.

When the United States applies heavy protectionism on its companies, bans certain apps, services and products from its market, and then subsequently begins pressuring other countries to do the same, it is simply a means to “safekeep democracy.”

Stupid dumbass cunts, they are dying in the streets like rabid dogs, don’t even have masks and all they know is censorship, banning, sanctions, wars and pure evil. FUCK AMERIKKA!

You sound like the type of person who would have an account in TikTok for sure tho :/

Good illustrative picture. Socialists hate people who have their own shops and can take care of themselves. Shop owners should also be on public funding like socialists.

China has 1.4 billion people and immense respect and influence in the world, it should develop its own media and internet platforms. US has 320 million impoverished people, so it really no standing.

But China doesn’t have its own media and internet platforms? Ohh wait, you don’t know about them because of the Great Firewall of China :)

and he thinks he will get a viable trade deal? …………… pffft

I think he knows he wouldn’t get any deal with China, Russia or Iran for that matter. I really don’t understand Trump is stupid or is he throwing, but it is nice seeing someone doing something different shi&.

In terms of different, do you mean by banning those businesses?

Not just banning this businesses (TikTok, WeChat) different in term of how Trump do stuffs.

Seriously, there is no chat application that does not spy on people … the only difference is who is hiding behind them … certainly the two applications spy in favor of China but the CIA in turn has its own chat applications who spies in its favor …

PS… and to be honest, I am not sure who the CIA is spying for … one thing is for sure, not for the Trump administration …

Mirror again, again. So facefock and whatsabout are spying on you for US Government and China get the blame.