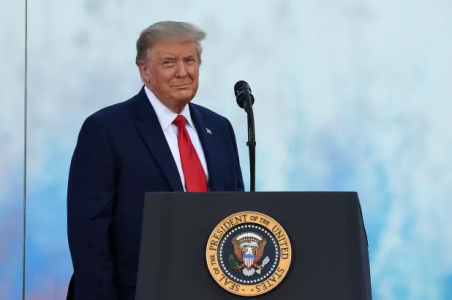 Former President Donald Trump has formally filed a statement of candidacy for a 2024 presidential bid. He announced candidacy for the post of head of the White House late on November 15.

According to polls, he will immediately become the front-runner for the Republican nomination despite last week’s lack of a “red wave” during the midterm election – after which Democrats held the Senate and lost the House by a much smaller-than-anticipated number.

He explained his decision by saying that “the world has not yet seen the true glory that this nation can achieve.” “We haven’t reached that peak yet. Believe it or not,” Trump said.

‘In order to make America great and glorious again, I am today announcing my candidacy for president of the United States,’ he confirmed to huge cheers before laying into the FBI raid, the ‘fake’ dossier’, the ‘deep state’ and lobbyists.

‘Three years ago when I left office, the United States stood ready for its golden age. Our nation was at the pinnacle of power, prosperity and prestige – towering above all rivals vanquishing all enemies and striding into the future confident, resourceful,’ Trump said.

Donald Trump teased spaceflight to Mars and a ‘defense shield’ over America in the more forward-looking parts of his 2024 presidential announcement speech.

1. dickless phaggot jews 2. They Did Not See That Coming

The Republicans in Congress should elect him as Speaker of the House.

Now Americans can choose between a vegetable and an egocentric Neanderthal and can alternate the tax dollar feast from time to time in the chase of world government.

Captain Jeff’s best client at the Bungalow wants another “$h0t”… Blackmailed or not!

Why would anyone bother voting for that shabos goy? He didn’t manage to accomplish one thing when he was President, all he did was tweet.