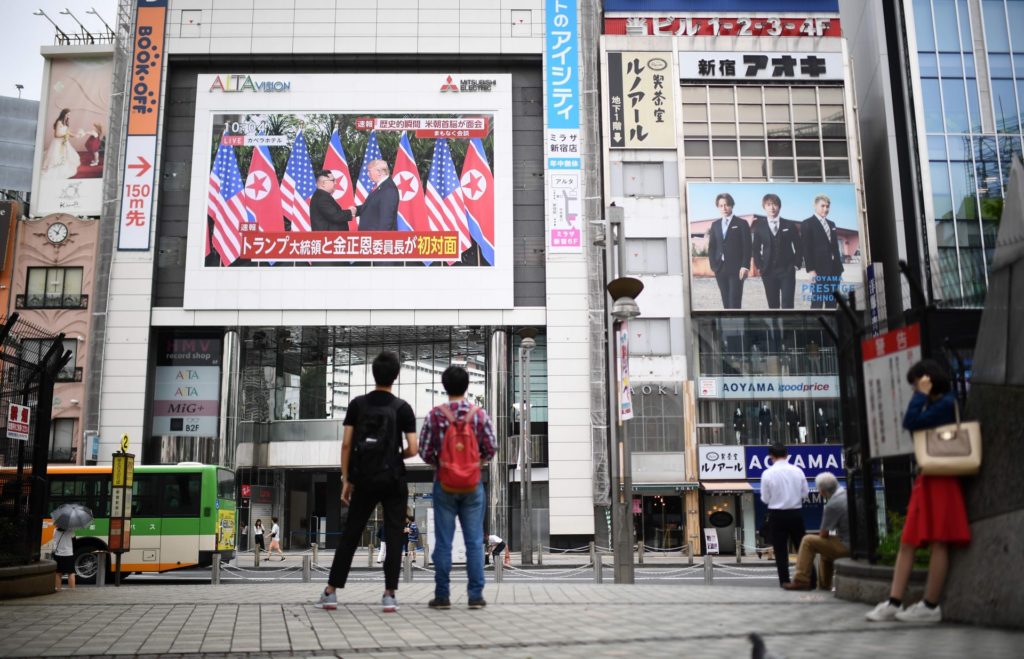 UPDATE 2: The US is going to halt military drills with South Korea while negotiations between Washington and Pyongyang continue.

Channel NewsAsia complaining that they haven’t gotten the text of the agreement between Trump and Kim from think tanks – new media already figured out what the four points of agreement were #SingaporeSummit pic.twitter.com/S8WybWmPqW

“At a certain time I will [travel to Pyongyang]. That will be a day I very much look forward to. I also will be inviting chairman Kim at the appropriate time to the White House. He has accepted… we want to go a little bit further down the road,” he said.

Trump added that the North Korean leader has expressed “unwavering commitment” to complete denuclearization. However, the anti-North sanctions will “remain in effect” at least for now.

US President Donald Trump and North Korean leader Kim Jong-un have signed a document that would lead to “major change”, the leaders announced at a joint news conference on June 12 after their first face-to-face meeting in Singapore.

No details of the signed document were revealed. However, the US president said that he will hold a press conference on the matter later in the day.

“Today we had a historic meeting and decided to leave the past behind, and we are about to sign a historic document. The world will a see a major change,” Kim commented.

According to Trump, the Korean peninsula “is going to be very much a different situation than it has in the past”.

Trump and Kim met for the first time face-to-face on June 12. The sides allegedly discussed how to to bring complete denuclearization to the Korean Peninsula and to de-escalate the US-North Korean tensions caused by Washington’s paln to crack down on the North Korean ballistic missile and nuclear programs.

very strange what is this document? you better not be giving up your nukes kimmy

You think it will, that be bending over to the amerkans.

Why strange when it is only logical outcome? They had agreed framework for future discussions. Kim wants guarantees for him and N. Korea and Trump wants all nukes. Now they must start to see more into details. How, when,etc…. If it works it is going to be a process that will take time…

“historic“ document. Lets see first what they sign then we label it.

It is nothing, a lot of luke warm air and rhetoric, but it is a start I suppose.

Daniel Castro
Reply to  You can call me Al

If Kim gives up his nuke I will send him a certificate of absolute retardation, muricans must leave ROK first, nukes go later. And all murican ships should keep a very safe distance.

You can call me Al
Reply to  Daniel Castro

Watch now, Trump is on.

He will give up them. China wants, and kim is Peking´s puppet.

1. The United States and North Korea will be committed to establishing new relations based on the wishes for peace and prosperity of the peoples of the two countries

2. US and North Korea to Join Strengths and Build Lasting Peace and Stability on the Korean Peninsula

3. Referring to the Panmunyama Declaration, North Korea is committed to completing the denuclearization of the Korean Peninsula

4.The United States and North Korea are committed to seeking the remains of war prisoners and missing soldiers, including the repatriation of identified

sounds good, if is kept, not at the expense of NK.

The text is similar what Gorbachev signed.

oh you seen it?

Yes. Both were published.

Great, I hope that it works.

Just don’t give up Nukes! Trump is openly bullying countries around the World. Remember what happened USSR, afterwards when Reagan said ‘Tear down this wall, Mr Gorbachev’. Remember Iraq, remember Libya, Syria, Yemen. Only Vietnam managed to defeat all American ‘maximum pressures’ and open War. Just days before this this walking mental disorder teared Iranian ‘Nuclera deal’ and impose more sanctions. What’s next? Open War against Iran? If so, it will be WWIII. Enough of you! Play with fire, and you’ll get burned.

https://www.youtube.com/watch?v=SOapqC1z7lY Isolated Trump leaves early as G7 summit fails to bridge divide | Al Jazeera English. Zionist Trump and Israel have made America Isolated by their wrong policies. American dollar is losing its value. Second many countries have already begun dedollarization in their trades.

“Reaffirming the April 27, 2018 Panmunjom Declaration, the DPRK commits to work toward complete denuclearization of the Korean Peninsula.”

– Joint Statement of President Donald J. Trump of the United States of America and Chairman Kim Jong Un of the Democratic People’s Republic of Korea at the Singapore Summit –

“Joint Declaration of the Denuclearization of the Korean Peninsula Bureau of Arms Control Washington, DC

Desiring to eliminate the danger of nuclear war through denuclearization of the Korean peninsula, and thus to create an environment and conditions favorable for peace and peaceful unification of our country and contribute to peace and security in Asia and the world,

1. The South and the North shall not test, manufacture, produce, receive, possess, store, deploy or use nuclear weapons.

2. The South and the North shall use nuclear energy solely for peaceful purposes.

3. The South and the North shall not possess nuclear reprocessing and uranium enrichment facilities.

4. The South and the North, in order to verify the denuclearization of the Korean peninsula, shall conduct inspection of the objects selected by the other side and agreed upon between the two sides, in accordance with procedures and methods to be determined by the South-North Joint Nuclear Control Commission.

6. This Joint Declaration shall enter into force as of the day the two sides exchange appropriate instruments following the completion of their respective procedures for bringing it into effect.

These types of denuclearization statements have been in effect for over 25 years. So far there hasn’t been any mutually agreed upon denuclearization, and I’m skeptical that we’ll see any in the near future. Hopefully the denuclearization issue will be sidelined and a peace agreement and normalization of relations between the north and south will be facilitated.

This idiot thinks that by giving up his nukes america will allow let him have his way.

Its just the first step on the road to an american occupied north korea. Trump is playing the man for a fool

Don’t be silly. There will never be an American invasion of N.Korea.

This isn’t 1950. We no longer possess the military power to even attempt it. Both sides know it.

And Donald J Trump does not possess the ability to play anyone for a fool. If anyone gets played for a fool, it won’t be Kim.

ANY AGREEMENT made with ZIONIST Jewish -CONTROLLED America and Israel is NOT worth the paper it is printed on:

From the TALMUD: Baba Kamma 113a.” Jews may use lies (“subterfuges”) to circumvent a Gentile.”

Gentiles are anyone who is NOT a Jew

As long as the grass grows and the water flows ! In US terms !