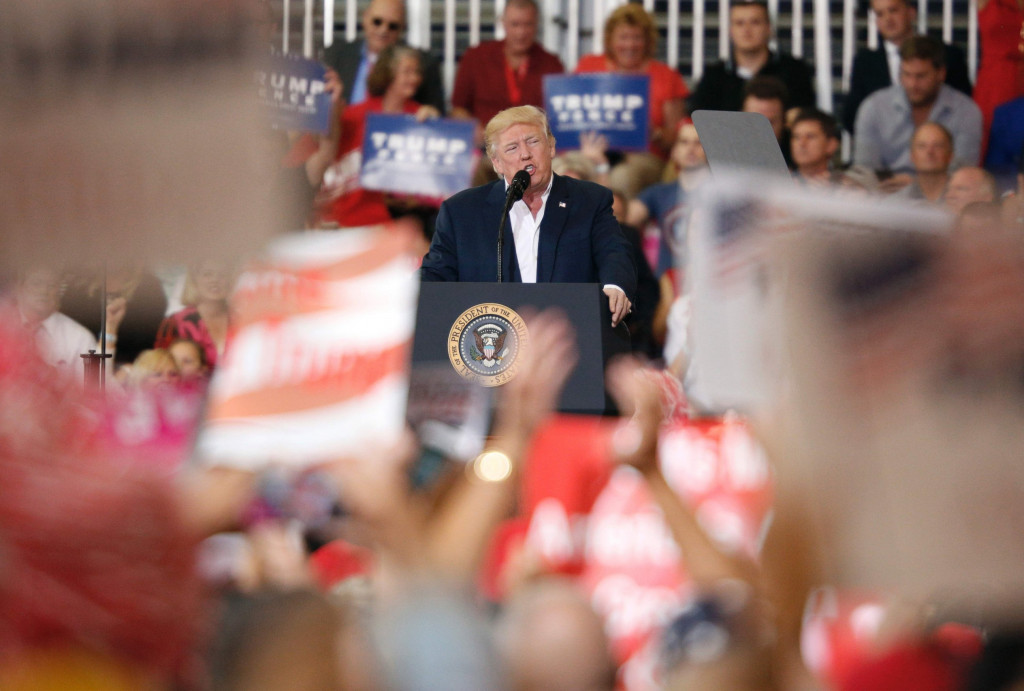 Trump’s first month in office proved nothing he said campaigning holds water. All politicians lie, saying whatever it takes to get elected, doing whatever they please once in office.

In short order, America’s 45th president surrendered to Wall Street and war-profiteers, gorging at the public trough – at the expense of humanity at home and abroad.

The hoped for antidote to Hillary appears no different when on policymaking – both subservient to monied interests at the expense of popular ones, both warriors, not peacemakers, both intolerant of challenges to America’s hegemonic aims, both hostile to all sovereign independent states, a deplorable situation, a dangerous one risking  possible nuclear war.

Hillary’s defeat didn’t dodge a nuclear bullet. It gave Trump the trigger, perhaps as willing to squeeze it to prove his machismo.

Both aspirants appear near two sides of the same coin, much alike on issues mattering most. It’s a tough judgment this soon into Trump’s tenure. Things sometimes change, though rarely, except for the worst, not better.

Trump’s South China Sea saber-rattling risks confrontation with Beijing. Other administration figures speaking for him, demanding Russia end Kiev’s war on Donbass and relinquish its Crimea territory, is a prescription for no change in hostile US policy toward Moscow.

Threats made against Iran, North Korea and Venezuela risk more trouble, thinly veiled ones for regime change. All this going on in a few short weeks into Trump’s tenure is breathtaking and disturbing for a White House aspirant promising a different way.

There’s more. Additional US combat troops may be sent to Afghanistan to continue America’s longest war – instead of ending what never should have been waged in the first place.

Bipartisan members of Congress want a new Authorization for Use of Military Force (AUMF) to wage phony war on terrorism – instead of demanding recision of the September 14, 2001 measure, three days post-9/11.

US Central Command head General Joseph Votel wants more US combat troops for Syria – not to fight terrorism, to support it.

The way to defeat ISIS and likeminded groups is by no longer providing them with weapons, funding, training and direction. They exist because of foreign backing. Without it, they’re a spent force once exhausting their supplies.

Trump directing “mad dog” Mattis to develop a preliminary plan on how to defeat ISIS appears more about designing a way to use these foot soldiers more effectively – continuing America’s war OF terror on humanity, not waging peace instead.

His campaign hoopla about draining the swamp was deceptive hyperbole. His agenda continues serving privileged interests at the expense of most others.

US imperial madness remains unchanged – world peace and stability as threatened as ever.

Way too early to make such a conclusion. Give Trump time. And btw: who wins, when the US is engaged in struggle with itself? The whole world! :-)

Not everything he campaigned for can be implemented in a short period of time given the opposition he has to deal with. Pence sounded the establishment rethoric, Bannon sounded the Trump rethoric, mixed signals are meant to confuse the opposition until a sure footing is established. As far as Wall Street, Trump will replace Fed chief Yellen shortly and he can dictate the Fed policy in a manner that can improve the economic outlook, instead of Wall Street.

McMaster is McCains General in the Trump admin.

Come on guys (people saying give him time), this shouldn’t even be a discussion about giving him time. He’s not going to do anything. He well turn out to be alot of talk and little action, the only action his going to take is agianst the poeple to weak to defend themselves. Native Americans in their native lands, Immigrants, Mexican Immigrants, and thats about it. He well be a paper president, and thats imberresing knowing all that smack talk he makes about people being all talk and no action and he has very little for an excuse since his party controls the house or representatives, the congress, the white house and maybe soon even the jugidical branch of goverment. Looser.

lol, what a load of fuming bullshit. There is no “give him time”, he’s been elected and will do his 4 years. If somebody tries to remove him, we will see how the people will react.

I’m not sure if your comment was a critic of mine or not but yes true he does have 4 years to try and do what he said, my opinion is that it doesn’t matter if he has 4 or 8. I don’t believe he we’ll keep his main promise which was to fight back for the average American and bring those middle class jobs back. I don’t believe it’s possible when he surrounds with people that became as wealthy as they are by beating on middle class

A week ago or so I was criticizing posters who already judged Trump after one month in office – they were trying to underline that he’s a zionist and that he shown he’s a puppet of the “strong powers” and so on. Now this.

So folks, take note – they are trying to separate Trump from all the people who believed he is in fact enemy to Wall Street, to Saudi corruption inside the US deep state and to the corrupted part of intelligence agencies, the ones who enforce the agenda of a masonic clique that has its dirty little hands over the majority of US msm medias as well.

I believe that after such a short time, the only thing that is really clear is the way these entities are working in order to remove a democratically elected President. One may well see that the “regime change” obsession is directed against the US themselves this time.

So, noting how much effort they are putting in trying to topple Donald Trump, one can have few doubts: Trump is somebody who is not at all liked by the elites that dominate the western world. So please, don’t look at the fabrications and the stinking tricks they try to maintain – if they hate Trump, and it’s proven, then he is a danger to them.

There is high probability that Trump will be impeached and M Pence Jesuit stooge will become yet another unelected president of US like G Ford. US will never change period and especially not by somebodies wishful thinking.

Does Trump know the CIA were arming ISIS…. Networking with Saudi Arabia who sends 80,000 + Takfiri kooks into Syria?.

If He does….and the Foreign Takfiri keep piling in with US special forces assisting, Airforce and Drone strike. If So….then Trump is as Evil as Obama was ….and is Bush 3.0.

US has no right to be in Syria.

Did you hear that RUSSIA!… Ya…you know. ..ya…. Hey look it’s another Israeli missile strike in Syria, ….

If asked…..Who is winning in Syria?

My answer is the Grim Reaper…. and the Ferry man at the River Styx.

The main power house behind Trump’s election were Koch Brothers. And Koch Brothers are members of Vatican’s Opus Dei. https://www.nytimes.com/2015/06/13/us/rev-c-john-mccloskey-iii-an-opus-dei-priest-with-a-magnetic-touch.html Pence was not electable however Trump was and they used Trump as a vehicle for bringing in Evangelical-Catholic Pence who is their real choice. “The Kochs must have popped champagne when Trump announced that Mike Pence, the conservative governor of Indiana, would be his running mate. Pence is adored by the Kochs and their vast political donor network;” Read further http://www.salon.com/2017/01/11/koch-allies-in-the-white-house_partner/

Vatican holds the Papal Bull of the America’s. …since after Cristobal Colon discovered The New World ( He didn’t, ….sea faring people’s from 3000 bc were over in the Great Lakes Canada pulling Copper out of Island de Royal)

As mentioned in previous posts, …CIA are Jesuit/SMOM. Masons are in the game…..but are not Primacy. The Vatican used the US Civil War to load up on Catholics for Northern States Via Immigration from Ireland/UK…. Many men went straight off the boat into Union Muster in State Regiments.

The Evangelical/Charismatic Christians of USA have been co opted into John Hagee Zionist or Jesus Wears Kevlar,…..America at war is,

Only some 27% of Americans voted for Trump, 26% For Hillary, The rest stayed home .

It’s Easy to control America, ….as the nation is more Self identified with satisfaction Figures and glam/gossip worship. From Sports to Hollywood,….Americans have each picked a favorite god/hero to worship

27% voted for Trump as they wanted no more illegal immigration, no war with Russia And no more Washington serve only the 1%.

US deep state is in some 3 way game of Intrigues which some Roman Elite from the Palatine Hill would recognize.

Brad I’m with you with all my heart and soul because it’s true. it’s in the Bible. Beautifully put together. Will those blind ever come to seeing. Many are just scratching surface like chickens.

“Last summer, Donald Trump called other Republican presidential hopefuls “puppets” for meeting with the billionaire Koch brothers—the notorious free-market activists who amassed the lion’s share of their fortunes through oil and gas processing and distribution. But as the inauguration approaches, the Trump transition team and his prospective administration are filling up with prominent players in the Koch political network—leaving many policy experts to speculate whether the president-elect himself might be their unwitting puppet.” https://www.good.is/infographics/koch-brothers-trump-administration

McMaster instead of Flynn – that’s a big mistake. Too many bloodthirsty, aggressive warmongers in his administration, eager to attack/bomb someone…

It might look like mistake to you and me but that’s exactly what they want. Yrs we would like peace but not them. They are of different mind.

Trumps Impeachment and whom would Republican congressmen prefer as a president. https://www.youtube.com/watch?v=VNhz6a1PKWY

Yes he is indeed.