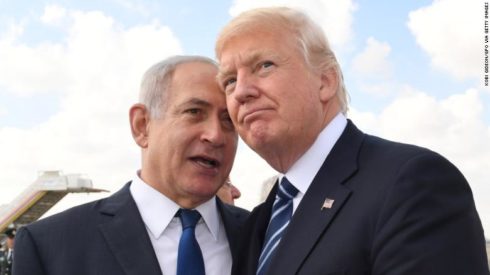 On September 2nd, Palestinian Authority President Mahmoud Abbas said that US President Donald Trump’s negotiating team had asked if he would agree to a confederation with Jordan, while speaking to a group of Israeli lawmakers and activists.

Peace Now’s executive director Shaqued Morag, who was present at the meeting said Abbas told the US that he would agree to a trilateral confederation that includes Israel. Decades ago Israeli officials pushed the notion of a confederation between the Palestinians and Jordan, however no mention of one including Israel was mentioned. As reported by Bloomberg, the Israeli government spokesman couldn’t be reached for a comment.

A statement from Abbas’s office said the president emphasized in the meeting that “peace must be reached no matter how great the challenges and difficulties it faces.” No mention of a confederation proposal was mentioned, while Mohammed al Madani, head of communication with the Israeli society, declined to elaborate.

Jumana Ghunaimat, the Jordanian minister for media affairs, said the idea of a confederation between Jordan and Palestine isn’t a subject of discussion. According to her, Jordan’s position is based on the proposed two-state solution and establishment of a Palestinian state with East Jerusalem as its capital, as reported by the Ammon News Agency, cited by Bloomberg.

Furthermore, on September 3rd, Anadolu Agency reported that Jordanian government spokeswoman Jumana Ghuneimat told media that joining Jordan with the Israeli-occupied West Bank was not a matter that is open for discussion, and it was “not possible.”

Anadolu Agency further cited, Murad al-Adailah, spokesman for the political wing of the Jordanian Muslim Brotherhood, the Islamic Action Front (IAC) that formation of the confederation would cause Palestinians to lose their right to “retake their occupied lands.”

“The idea of confederation means Palestinian people to lose their right to liberate its occupied lands. This right can only be achieved by liberation of all Palestinian lands,” Adaliah said. He claimed that the Jordanian people would not accept a solution that will put the Palestinians’ rights at risk.

As reported by Bloomberg, Israeli-Palestinian peace talks have been at a standstill since 2014. The Trump administration claims to be working on a plan to end the 70-year-old conflict, however the plan is not released yet. So far, all the steps taken by Trump have been welcomed by Israel and condemned by the Palestinians. According to them, Trump’s measures hurt international efforts to establish an independent Palestinian state in the West Bank and Gaza Strip.

On August 31st, Trump announced that the US would halt contributions to the United Nations Relief and Works Agency for Palestinian Refugees, calling it an “irredeemably flawed operation.”

UNRWA administers aid to 5.4 million Palestinians in the Middle East. It allows descendants of Palestinians who lost their homes as a result of the 1948 conflict to be registered as refugees in perpetuity. Bloomberg cited unnamed critics who warned that halting assistance that goes toward food, education and health care would worsen the humanitarian crisis, lead to unrest and boost the appeal of radical groups.

Earlier in 2018, the US relocated its embassy in Israel from Tel Aviv to Jerusalem. In addition to that Trump announced that the US would recognize Jerusalem as the capital of Israel, sparking violent protests along Gaza’s fence. As reported by Bloomberg, Israel responded with force killing more than 50 people in a day and wounding hundreds.

An analysis by Haaretz, which mostly correlates with reality claimed that a confederation between the Palestinians and Jordan is close to impossible. According to the outlet, a confederation with two or even three partners is not unacceptable, it could prove advantageous for all sides, as long as each side can benefit from the mutual guarantees of national independency and sovereignty. The analysis, however, concludes that it more than likely will not come true, and the Trump administration’s plan for solution would possibly be dead on arrival.

The analysis concludes with the following:

“But with the Palestinians still refusing to give up their aspirations of national independence, Israel waging an all-out war on the idea of an independent Palestinian state, and Jordan fearful of losing its national identity within the salad of a confederation, this vision seems more like a cluster of colorful soap bubbles.”

International Criminal Court prosecutor, Fatou Bensouda has warned Israel that the killing of over 150 Palestinians with live ammunition at the Gaza border has been added to her list for consideration. M’s Bensouda’s remit is to investigate the possibility of Israeli war crimes, crimes against humanity and genocide in Palestine. http://david-morrison.org.uk/palestine/icc-warns-israel-on-gaza-killings.html

It does not matter if the hooked nosed gits are found guilty or not; there is only one way and unfortunately,that means lives.

In the meantime it is important to have them identified as WAR CRIMINALS. That rips off their defensive mask and exposes them as perpetrators of genocide. This will make it a lot easier to eraze IsraHell off the world map.

Israel, ISIS, Al-Qaeda etc created by US and UK. These are US and UK armies with different regiment names.

Not Found The requested URL /palestine/icc-warns-israel-on-gaza-killings.html was not found on this server.

Try navigating to his homepage Richard and you will see the article listed, under Recent articles; http://www.david-morrison.org.uk

To me, this confederation of Jordan and Palestine means Jordan absorbing all Palestinians into Jordan. Which would free Israel to take all of Palestine. Have I got this wrong?

No, you are not wrong. The child killers will try any thing to keep their stolen goods