US vehicles patrol near the village of Yalanli, on the western outskirts of the northern Syrian city of Manbij CREDIT: DELIL SOULEIMAN/AFP/GETTY IMAGES

The administration of US President Donald Trump has approved providing heavier weapons to Kurdish forces operating in Syria, AFP reported on May 9, citing a US official.

The mainstream media and US officials have repeatedly argued that the US-backed Syrian Democratic Forces (SDF) are a “multi-ethnic and multi-religious alliance” fighting against ISIS. However, since the formation of the SDF, the Kurdish People’s Protection Units (YPG) and the Kurdish Women’s Protection Units (YPJ) have remained the core of the organization. The US has tried to build some major “Arab faction” among the SDF, but this effort has succeed only partly.

Thus, if Washington wants to storm Raqqah somewhen, it needs to arm YPG and YPJ forces with heavy weapons on an official level or to deploy more US troops in Syria. Meanwhile, Ankara argues that YPG and YPJ are terrorist groups.

More about the battle for Raqqah HERE.

kurds are bad news man.
A “moderate isis”.
Goal is the same too: get that pipeline thru syria…
Never turn ur back on them… thats for sure…

Agreed. Using them for just that reason. Don’t be surprised to see a union of Turkey, Syria, Iraq and possibly Iran with weapons support from Russia.

Putin could eliminate SDF pipeline support by giving them more than the US has, since I’m sure that issue is up for bid and the US certainly hasn’t yet given SDF more than Russia can.

This news will irritate Erdogan for sure. HAHA
I guess Trump is no longer his best bud.

as i know the potomac rats, this is the last warning for erdogan.

Heavy weapons are harder to smuggle into Turkey than light weapons, so I don’t see Turkey’s problem.

Whether Trump is in charge is irrelevant. The us policy in Syria and Iraq is to build a Kurdish superstate. It will seize the lions share of oil from both countries, expel a vast Arab populace, and be used as a powerful new ally in the region to attack Iran.

However, the Kurds main objective is their ancestral homeland, in Turkey. Even before attacking Iran they are a major threat for causing the breakup of Turkey. If Erdogan had any brains, he would 180 his entire Syria strategy.

Wouldn’t the logical counter to that then be full alliance with Turkey, and leaving Nato, if Erdogan has self preservation skills? Turks holding al-Bab or areas north of Aleppo, or Idlib is a lesser threat. I don’t think it’s at that point yet but eventually will end up once Raqqa, Deir-Ezzor, Mosul and long Iraq-Syria border situations are clear and Isis has been squeezed from everywhere to the open desert. The new set will be formed.

Russia could make the Kurds an offer far more easily than making one to Turkey and Greece.

Yes I agree they can’t afford to boot Turkey. But it really all depends on Erdogan who has
the most to lose with kurdish superstate, which is the defacto US goal. I think it’s too early to call the conclusion. The only thing I know is the end conclusion won’t be RU/USA cooperation. One can’t get both the kurds and Turks. Usa takes kurds = RU takes Turks and vice versa. 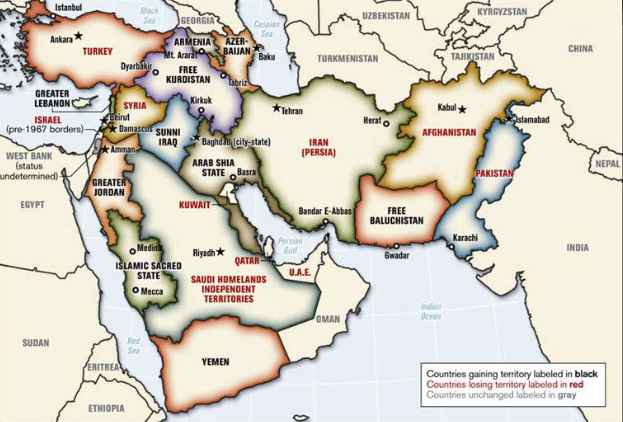 Who’s map is this?

Some map that once cropped up and which conspiracy nutters love to prop up at every opportunity as proof of some nefarious design.

Err no you are wrong http://www.globalresearch.ca/plans-for-redrawing-the-middle-east-the-project-for-a-new-middle-east/3882

Its the famouse map made by Lieutenant-Colonel Ralph Peters of the U.S. National War Academy that a visiting Turk officer saw and went ape shit over.
http://www.globalresearch.ca/plans-for-redrawing-the-middle-east-the-project-for-a-new-middle-east/3882

Armenia would be getting more land btw.

Yes id suggest the top bit of Kurdestan on the Black sea.
Id also suggest that Greater Lebanon also take in Hatay in Turkey and that Afghanistan have a Pastunistan.

The iraqis will certainly not go along with a kurdistan and that oil, and they are stronger than syria and have the historical “you owe us USA” to back up that claim.
Which throws a whole monkey wrench in the thing.
Syria is weak for now in north syria, however, we could see a SAA versus kurd lineup soon after isis is eliminated…

mmm, no.
erdoghan will gladly join in if syria and iraq started pushing the kurds. He will even go so far as to turn his back on the “FSA” because they have turned into a (predictably) horrible BUST… I dunno why he even bothers supporting them anymore, they are stopped cold and will most likely not move from their current positions UNLESS indeed the whole thing flipped against the kurds, then EVERYONE will be banging kurds.

Ok, point one was what I said. Check.
Point 2: “Assad would say no”.
No, I think Assad would not say anything unless erdoghan was bombing SAA forces.
Point 3: “Erdoghan would still support”…
No, erdoghan plays his own game, he rarely cooperates with the SAA. The only one he cooperates with is russia/putin. And that whole thing is wildly unreliable for anything but putin is supporting assad and has erdoghan on a kind of leash.

Assad won’t attack Kurds until he has driven out a number of other militias, including parts of FSA, and AQ, and that will take a while.

So why are we talking about this now?
The Jihadist and ISUS still hold much territory in Syria (the conflict is not over).
Kurds are still “allies” of SAA/RU/US against the Jihadist.

I just turned the AC on, I may be chilling out very soon.

Several other militias are ahead of YPG on SAA’s enemies list, AQ for one. I think it will be a bit longer than that before they get around to fighting Kurds with much effort.

At the rate that its going, they will have almost all of al quaida in idlb by the end of this year, which is also pretty much inline with the rate that the kurds will have raqqa done and deir ezzor countryside. And with all of the fsa contained in the idlib pocket, they could decide(if the kurds are good boys and girls or not) what to do with the north east. If the winter “pause” regimen holds, then next spring could be spectacular… or a dud.. one of the two. ^.^

Some Arabs might leave when YPJ defends their daughters’ abortion rights; but that doesn’t constitute expulsion. I hope YPJ takes Dier Ezzor, Tel-Aviv, Mecca, Kabul and Cairo, Tripoli and Luanda; and brings abortion rights to all. But not Turkey because they have abortion rights already.

Ohh great more heavy equipment for Daesh as they will be running short of supplies by now and will love a top up. Could we call this Iraqi 2??

Did kurds ever lose equipment to Daesh??? I thought that was the Iraqi government, and FSA.

I dont think they ever had any heavy weapons. Thats why I said is it another Iraqi 2. Isn’t that what they did with Iraq and then this group of ISIL only had AK 47’s scared the Iraqi army to run away and these guys knew how to drive them too.

So if thats the case do they get to keep them if ISIS are removed from Raqqa and can they then use them on Turkey which is a NATO member and an attack one means an attack on all. Which in my opinion a continuation of the war in Syria not ending it. US should just remove itself from the area and concentrate on the mess it created in Iraq dont you think? And take its White Helmets with them.

No, because Turkey has abortion rights already, but SDF can use them to seize Mecca, Tel Aviv, Kabul and Cairo if they want; and bring their abortion rights.