On July 11, the Trump administration announced that the US was starting the process to impose 10% tariffs on another USD 200 billion in Chinese export goods as soon as September.

The move is further expanding the economic trade war with China.

“For over a year, the Trump Administration has patiently urged China to stop its unfair practices, open its market, and engage in true market competition,” US Trade Representative Robert Lighthizer said in a statement, according to CNBC. “Rather than address our legitimate concerns, China has begun to retaliate against U.S. products.”

The tariffs will undergo a two-month review process, with hearings on August 20-23.

The new sanctions follows threats by US President Donald Trump that he may implement tariffs on at least $500 billion in Chinese goods should Beijing retaliate against the $34 billion in US tariffs, which started working last Friday.

US. Trade Representative Lighthizer’s statement regarding the new tariffs:

“On Friday, in response to unfair Chinese practices, the United States began imposing tariffs of 25 percent on approximately $34 billion worth of Chinese imports. These tariffs will eventually cover up to $50 billion in Chinese imports as legal processes conclude. The products targeted by the tariffs are those that benefit from China’s industrial policy and forced technology transfer practices.

China has since retaliated against the United States by imposing tariffs on $34 billion in U.S. exports to China, and threatening tariffs on another $16 billion. It did this without any international legal basis or justification.

As a result of China’s retaliation and failure to change its practices, the President has ordered USTR to begin the process of imposing tariffs of 10 percent on an additional $200 billion of Chinese imports. This is an appropriate response under the authority of Section 301 to obtain the elimination of China’s harmful industrial policies. USTR will proceed with a transparent and comprehensive public notice and comment process prior to the imposition of final tariffs, as we have for previous tariffs.”

It’s intersting to note that Washington claims its actions are fair and legal while any Chinese response is illegal. This is a common US approach in any conflicts.

The Chinese Commerce Ministry released own statement slamming the US move promising a mirror response to defend its national interests.

“The Chinese side is shocked by the actions of the US,” the ministry said in the statement. “In order to safeguard the core interests of the country and the fundamental interests of the people, the Chinese government will, as always, have to make the necessary counter-measures.” 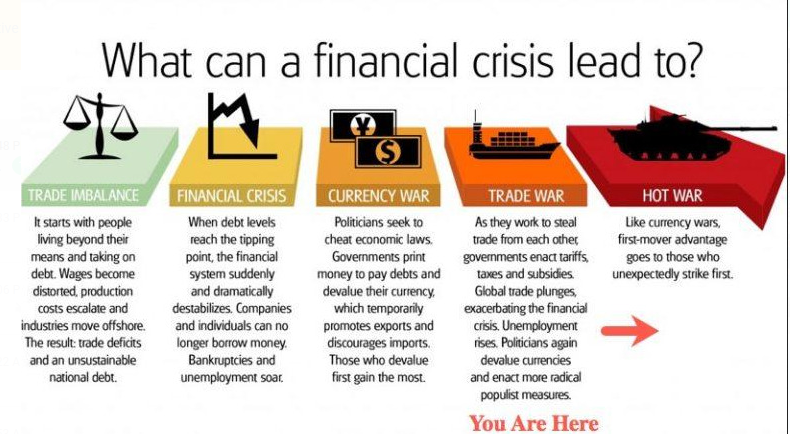 You’ll notice the U.S. failure at control – this time of #3: Currency War. The U.S. government has printed plenty of money (debt) and flooded the world with it, but the world (China) has refused to devalue the dollar. Or rather they (China) see more benefit in devaluing the yuan just as fast, and they can play this game waaay longer than the US can continue to print more debt. It’s a bit more complicated with the USD/Euro, but some would argue that the Euro was created precisely to prevent resistance against the trick of dollar devaluation when/if the shadowy banking powers wanted it.

Failure of #3 means a weak, ineffective #4: Trade War. Tariffs are the fine-tuning after currency devaluation has done the heavy lifting. USD devaluation (by the US and central banks) has utterly failed. Tariffs are too little, too late to fix a failed USD devaluation. Global trade is not going to plunge – it will only be temporarily disrupted and continue to shift away from the USD. Trade itself will be shuffled around and redistributed from the biggest USD-dependent industrialized nations to smaller players. At least in theory.

The neocon/Israeli-firster obsession with a US-backed #5: Hot War, is doomed to failure as well. It depends on a consumer-driven, decent-wage middle class in the US, which it has thoroughly gutted and significantly eliminated. Raising the minimum wage here to $15/hr is pointless in a rentier economy. Nobody in the US is willing or able to buy more imported or domestic consumer junk because of that increase. I guess the plan now is ‘social unrest’ to get the US peons fired up for another war, but that depended on an MSM monopoly in information and credibility – neither of which it has in the least. The Demonizing the Enemy (Russia and Iran) phase is falling apart rather quickly on them.

I honestly don’t see what else they have left in their bag of tricks for the old-timey #1 – #5 plan above. Psychopaths will always double-down rather than admit defeat, but I can’t see how that’s possibly going to help them here. They need another plan – this one is history.

Indeed, the only next step left for these psychopath’s is war. I believe it will be similar with what they have done with Ukraine, in that, they have made people poor, desperate, and brainwashed with a supposed enemy. In addition, they have made a regular draft so nobody can escape the clutches of the war-driven meat-grinder, unless of course your rich and privileged.

They have no need for massive populations in a world fast increasing with robots and automation.