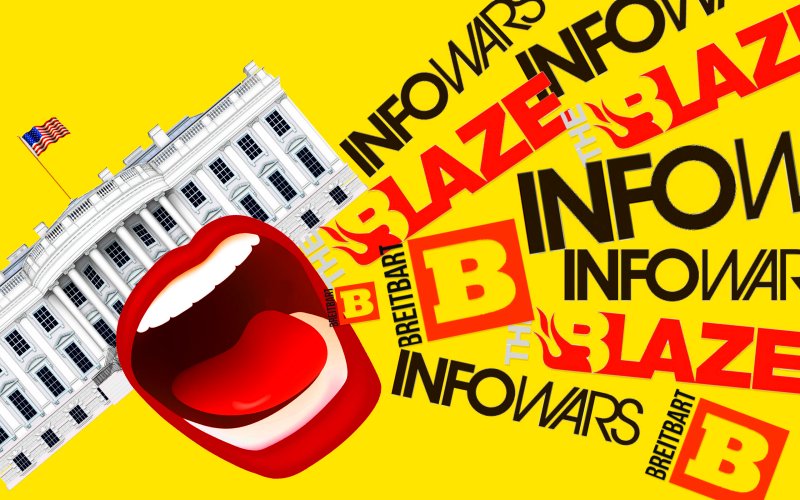 In an interview with Fox & Friends that aired early Tuesday morning, President Trump blamed former President Obama for protests against him and other Republicans, as well as “possibly” some of the leaks from the White House: “I think President Obama’s behind it, because his people are certainly behind it.”

Trump was asked if he believed Obama was responsible for the town hall protests against Republicans this month: “It turns out his organization seems to do a lot of these organizing to some of the protests that these Republicans are seeing around the country against you. Do you believe President Obama is behind it and if he is, is that a violation of the so-called unsaid presidents’ code?” Trump was asked.

“No, I think he is behind it, because his people are certainly behind it. I also think it is politics, that’s the way it is,” Trump replied.

Trump on protests: “I think that President Obama is behind it” pic.twitter.com/vvxNyV22NU

Trump discussed the leaks that have disrupted his first month in office: “You never know what’s exactly happening behind the scenes. You know, you’re probably right or possibly right, but you never know. No, I think that President Obama is behind it because his people are certainly behind it. And some of the leaks possibly come from that group, which are really serious because they are very bad in terms of national security. But I also understand that is politics. In terms of him being behind things, that’s politics. And it will probably continue.”

Trump did not offer any evidence for his claim in the clip released by Fox Monday night. CNN reported that it has reached out to Obama’s office for comment. A broad coalition of groups including Organizing For Action, the SEIU, MoveOn.org and the Center for American Progress have been working to help with grassroots organizing around GOP town halls.

Organizing for Action, the group formed from Obama’s campaign organization, has 14 professional organizers, for example, who are involved in teaching local activists skills to effectively vocalize opposition to the GOP’s top agenda items. Earlier this month, Trump told Fox News that reports of his calls with the leaders of Mexico and Australia were caused by leaks from “Obama people.” Trump’s administration has been plagued by leaks within his administration to the media, and he has continually railed against those doing the leaking and the media since taking office, even slamming the FBI for being unable to root out the leakers. He has said the leaks are damaging to national security. * * * And speaking of the leaks, Trump said that he would’ve handled the crackdown on government leaks differently than Sean Spicer, having “one-on-one sessions with a few people,” instead of the way White House Press Secretary Sean Spicer did it: in an “emergency meeting” for White House communications staffers where he asked them to dump their phones on the table for a “phone check” to prove they had nothing to hide.

.@POTUS reacts to WH staffers’ phone check: “I would’ve handled it differently than Sean, but Sean handles it his way & I’m ok with it” pic.twitter.com/hZPta7GX35

Additionally, Trump also discussed accusations that he is a racist, especially in the aftermath of the Acamdey Awards where the topic prevailed, and wrote them off as “purely politics.”

“I can’t [take racist accusations personally]…I have to write it off as purely politics.” –@POTUS pic.twitter.com/vxSM1ztsVu

“It just seems the other side whenever they are losing badly they always pull out the race card,” Trump said in response to a question on Fox News’s “Fox & Friends” about host Jimmy Kimmel’s comments Sunday night at the Academy Awards. “I’ve watched it for years. I’ve watched it against Ronald Reagan. I’ve watched it against so many other people. And they always like pulling out the race card,” Trump added. “The fact is I did pretty well, much better than past people in the Republican Party in the recent election having to do with Hispanics, having to do with African Americans, did pretty well or I wouldn’t be sitting here. I mean if I didn’t get numbers that were at least as good or better I wouldn’t be sitting here.” When asked if he takes the attacks personally, Trump responded, “I can’t” and added that “I consider it a very serious violation when they say it and I have to write it off as being purely politics.” * * * Finally, Trump said he would give himself an “A” in achievement but in messaging a “C or C plus.” “In terms of messaging, I would give myself a C or a C plus,” Trump said. “In terms of achievement I think I’d give myself an A. Because I’ve done great things, but I don’t think we’ve explained it well enough to the American people.”

How would @POTUS grade himself?
Effort: A+
Messaging: C or C+
Achievement: A pic.twitter.com/2Pm0SxY71h

The President also gave himself an “A” for “effort.”

Markets will be closely watching Trump’s address to Congress in just over 13 hours, and grading him on every word to come out of his mouth, with some speculating that lack of any explicit, and overdue, details about his economic plans could be the final nail in the nearly four month old reflation trade.

This is a very interesting article from NEO about bigger picture of Trump presidency. http://journal-neo.org/2017/01/09/is-trump-the-back-door-man-for-henry-a-kissinger-co/