US President Donald Trump accused UK Prime Minister Theresa May of undermining Brexit in an interview with The Sun.

Trump said that she has ignored his advice by opting for a soft Brexit implementation. He added that May may have killed off any chance of a trade deal with the US.

“She didn’t agree, she didn’t listen to me,” the US president said commenting on how May reacted to his advice.

Acording to Trump, the British PM’s Brexit plan “will definitely affect trade with the United States, unfortunately in a negative way.”

The president noted that the US has “enough difficulty” with the EU.

“We are cracking down right now on the European Union because they have not treated the United States fairly on trading,” Trump added.

Trump’s remarks are another signal of the currently complicated relations between the US and its European allies. These relations have been reecntly fueled further by new tariffs imposed by Washington on EU member states.

Many Americans and even some Brits, thought that Trump was heroic – all he did was further alienate the majority of Europeans towards him and the US. He is abusive and bat shit crazy, however whilst he was right regards May in principle, the undemocratic, frankly rude way he expressed them IN PUBLIC, was absolutely shocking. It is also a total stitch up that Boris is involved in.

Remember that undiplomatic twat the UK has that stated “Shut up, go away” or something, to Russians, even we rounded on him.

Something big is brewing.

The news conference is going on now. They are all kissy face.

Something big is brewing, no doubt. I hope that we survive it.

something big happens or is going on every day, with this idiots the question is who of the ones who matter take them seriously?

At the moment, they just screwing each other and that is not bad, it is good.

I agree that it is good when they are merely screwing each other and having their fancy pants pageants. Unfortunately there is a ridiculous amount that is going on behind the scenes.

Later in the day, as Trump was playing toy soldier with the Queen his enemies made a move back home.

They got a paid off grand jury to add an addition 12 Russians to the Mueller investigation. This time they are Intel officers. You just cannot make this stuff up. Soooooo…..just before the Trump/Putin face to face there is fresh blood spilled on the ground to make the meeting a little juicer.

The announcement starts at the 9 min. mark.

yes the russians hack and the russians change the elections or influence them in US, a country that never had anything but phony rigged elections, since her berth. They also attack with military grade nerve agents, twice Ukaka, right next to their factory of manufacturing the said nerve agent.

Who really give a sh*t what they saying or doing, beside maybe the russians. Though as far I know from my contacts in russia, on all levels, they are laughing in some ways their heads off, as to how moronic UK/Usrael are and how they play straight into their hands. Make believe among their populations and what happens in global scale, in the real world and not the hollywood make believe world they created, into the minds of their minions, unlike what you may think, is not one and the same. It may also be important to you if you live in that sh*thole. No one else.

But what I find hilarious is when I hear an american or a brit talking of justice and………….. they will wake up real soon to the raw reality, that this kind of BS dont work or take you very far, with countries that can bury you and erase you from the face of the earth, if they decide to say, fuck them and lets go to war.

I have no doubt at all that the Russians are laughing.

also have no doubt that nothing any more west does can hurt any one but their own populations. All they do now, they lost almost the global game, is making sure their slaves are fully under the spell and not turn against them.

If the chinese and the russians decide to play hard ball causing a massive riot in the west it be as easy for them to do like taking candy from a baby. To most of us following their history and their genocides around the world, we think is time the colonies who become the willing military arm of those creatures, building the colonies with the blood of the natives they genocide and stole their lands is time what went around to come around and the best justice is, the off springs of what they used to genocide 10s of millions of people around the globe to turn against them and re claim humanity back for themselves. Other wise, they deserve what is coming to them.

I think that I know your cousin/brother. ;-)

There is nothing new under the sun. If this fuse blows there will be no place to call safe. It will be another reset, and by no means will it be the first time.

The brutality of mankind in history did not begin in the west.

Only problem these were announced 3-4 months ago it is pretty embarrassing though at the way they look more and more like the Jesters and Fools at King Trump’s court ,p.s. last part was hard to type almost wrecked my keyboard.

Well, it appears that I got fooled. The February announcement was for 13 Russians being accused. So they have dusted off the same story from February and tweaked it a tad and had a press conference for the sake of distraction?

Silly me, of course they did.

That is the way of P.R. in politics always games and lies as they were also same ones again last year, one is even an Israeli Russian Jew.

Britam
Reply to  You can call me Al

Well, the Brit government showed Trump how to diss a peer with the ‘backdoor’ reception they gave him when he visited. He was being ‘politely’ insulted. He is not one to suffer fools lightly. This will get more ‘interesting’ as time goes along. Look for American troop drawdowns from Europe soon.

You can call me Al
Reply to  Britam

It is not my government, well what we voted for anyway. Sorry.

i think Trump is awesome and amazing! i agree with 100% of the things he says and 100% with the things he does except for Israel and Syria!

Good for you. At least you have respect in your leader, which is totally different to me. I am disgusted in my Government. 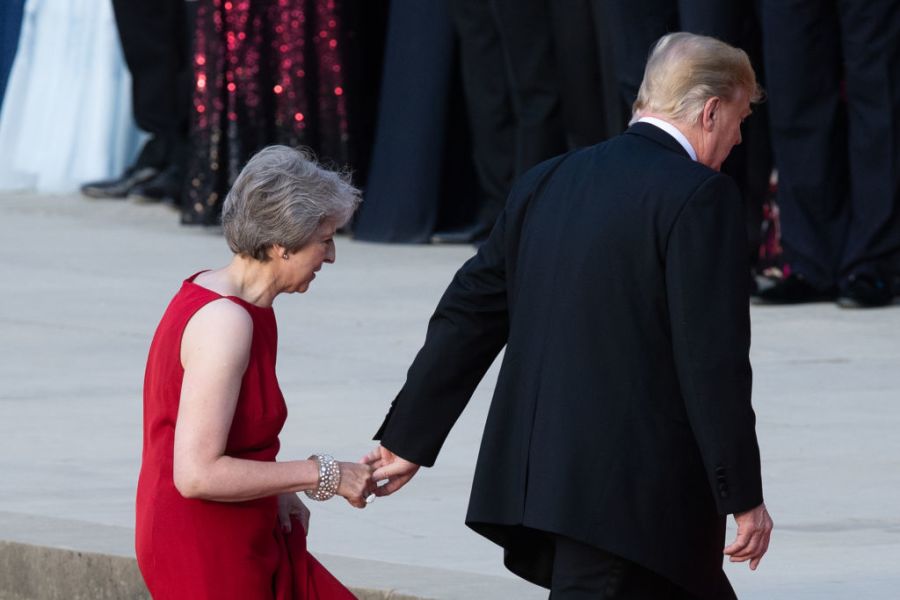 My gimp is the thing in the red dress.

Hahaha. Actually i am Australian! I do like Trump though. Putin too!

MAY Fuck OFF!! You are Done….You look like you are the Happiest Woman in the Whole wide World in this Picture you brighten up the whole room…, as always

Another Positive thing: You Tested Kosher-Positive in this Test…and Remember: Always Look at the Bright Side O’ Life
https://www.google.nl/amp/s/www.timesofisrael.com/theresa-may-jews-and-israel-6-connections/amp/

I think that summarises mt view as well. Are we getting a few beers soon ?.

That skank makes me puke.

Sure would be nice… just let me know when you have the time and where you want to meet…:)

Anytime really. Amsterdam is fine, Utrecht slightly better but Arnhem . Nijmegan for me.

I live close to Utrecht, Arhem ain’t a Bridge too Far… I will let you know when I can come over there…somewhere next week?

What about Utrecht ?, does it still have the Irish Pub ?.

Mick O’Connells In Utrecht !!?….. same name as the one in Arnhem, but I bet a hell of a lot better.

Either one, you choose, later this week or maybe early next week – sorry, work !!.

Russia and Iran have defeated ISIS in Syria. Now Russia, Iran, China and Pakistan want to stop ISIS expansion in Afghanistan while having questions about unmarked helicopters flying ISIS to Afghanistan and US are ignoring it.

Does it not make sense who is behind ISIS and who is against? These 4 countries and others in the region must unite against repeated terrorist activities that backed by US and their nonsense allies. Hope these professional global killers will go down soon.

Fuck Pakistan! They cry now that it rains whereas they are the ones that helped make the clouds of ISIS.May ISIS take over Pakistan; all the more reason for India to nuke the place!

Which country you are from, are you from Israel? Don’t worry in 1967 war Pakistan just shot down 10 planes of Israel without losing any plane or pilot but you know this time Pakistan will wipe out whole Israel from Palestine just with in 10mins.

Why would you think i am from Israel? I hate Zionism. Have you even read my history? Don’t tell me you are Pakistani and all is good in your eyes with your country? You helped give birth to ISIS,AlQaida,Taliban! Just as responsible as Uncle Sam.
So you thought i was a Zionist because I criticised your country?
Wow! I gave you more credit than that friend.

The way they all have those looks on their faces as if they have been just told by Trump whoever smelt it dealt it!